The government has no business investigating Exxon

“Amid record oil prices and soaring gasoline costs, Exxon Mobil's $400 million retirement package to its former CEO is a "shameful display of greed" that should be reviewed by Congress and investigated by federal regulators, Democratic Sen. Byron Dorgan (news, bio, voting record) said on Tuesday.”

“Dorgan said he wants Exxon Mobil officials to appear at a Senate Commerce Committee hearing to explain how the corporation "justifies" giving its former boss, Lee Raymond, such a huge retirement package.”

In a free country, this is frankly none of our business. The only people who should be concerned are Exxon’s owners, its stockholders. Nothing is being hidden from these investors. This is a totally transparent transaction. Senator Dorgan is simply harassing a major capitalist entity. Is this intellectually challenged politician really interested in bringing down our gas prices? If that is indeed the case, why not have hearings on how best to add more nuclear energy plants, refineries, and immediately start drilling in Alaska's ANWR? Are you upset with raising fuel prices? Well, you have no one to blame but yourself if you normally vote for Democratic and "moderate" Republican candidates. They ultimately only care about satisfying the wishes of the affluent yuppie elites.

UPDATE: Morgan notes in comments - 'Who profits from oil? 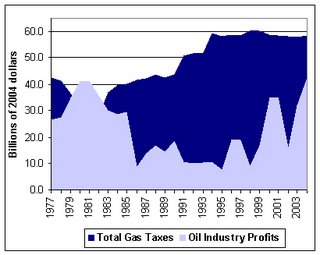 We can expect Sen. Dorgan to give back "excessive tax receipts" on oil products on about the 12th of Never.
Posted by David Thomson at 4:28 AM

Exxon earned the wrath of many lawmakers when it reported more than $36 billion in profits last year as energy prices paid by consumers soared.

"earned the wrath of many lawmakers"... I love that phraseology. I wonder how many times over the years lawmakers have "earned the wrath" of Exxon execs, workers, and stockholders. Come to think of it, lawmakers are quite adept at "earning the wrath" of just about everyone who happens to be among those consumers who are paying these soaring energy prices.

Dorgan said he will push to win passage of his legislation that would impose a windfall profits tax on big oil companies and rebate that money to consumers, unless the companies used their earnings to explore for and produce more energy.

Umm... lemme guess... the Dems get huge donations from trial and tax lawyers, right? They'd sure like to see a huge portion of those Exxon earnings go to help guarantee the full and profitable employment of lawyers as they wage never ending battle in the courts among one another to secure and prevent exploration rights and refinery building and reams of legal professionals holding down "living wage" jobs tracking and avoiding the billions in "windfall" tax payments.

"I think a sensible public policy would insist that the big oil companies either invest those windfall profits in things that will increase our own domestic energy supplies, or we should return some of that money to consumers," Dorgan said.

Is Dorgan working to make it possible to invest in domestic energy supplies? Is he out there fighting to allow folks to drill for oil and refine petro products?

"Using them to drop $400 million dollars in the pocket of a big oil executive is simply unacceptable," he added.

I don't know this retirement package looks like but presumably the entire $400 million isn't payed out in one lump sum. If it is Dorgan's gonna have his greedy little congresscritter hands on a healthy pile of it pronto. But even if it is and all $400 million went to the "big oil executive" rather than some big chunk going to the taxman, and Dorgan was able to sieze every penny of it and return it to consumers by some means... what would that mean to consumers? What would we get, $2 or $3 each? Maybe gasoline for $0.02/gal less for a couple weeks?

Dorgan's got an MBA - surely he could back of the envelope those numbers for us.

Exxon Mobil has defended Raymond's retirement package, saying it was pegged to the rise in the company's profit and market capitalization that occurred during his tenure.

I've got mixed emotions about the rather preposterous compensation packages some CEOs and other execs get but... Exxon is a "big oil company". They hired this guy to raise profits and their stock price and tied his comp package to that performance. In a nation that hasn't let a "big oil company" build a refinery in the 30 freakin' years and screams bloody murder about anyone trying to pretty much anything that has anything to do with "big business" anywhere near anyone's backyard or anywhere far enough away from anyone's backyard to qualify as "wilderness", it sounds like the guy managed to be in the right place at the right time with some combination of cleverness and good luck.

Just askin, but was Dorgan screaming for a windfall profits taxes when Jack Whittaker of WV he won a $314.9 million Powerball jackpot. Hard to imagine anything more "windfall" than that and it ain't all that far from $400 million.

Is Dorgan going to demand a "windfall losses" credit the next time a big company loses a lot of money?

Despardos waiting for a train, I'm telling ya.

It's a twisted worldview that Dorgan has, believing simultaneously that big oil is evil and that it is our only hope for salvation.

So here he comes with a stick to try to whip satan into savior.

Do you think he pictures himself on horseback?

Who profits from oil?

It is regrettable that Sen. Byron Dorgan can take for granted that a minimum of 40% of the American voters buy into this bovine excrement. Economic illiteracy is pervasive within the United States. By all rights, Dorgan should be laughed out of town. Instead, the MSM and its leftist allies will turn him into a hero “who fights on behalf of the common man.”

Hey, I am no socialist but I knew when Exxon made the biggest profits of any company in history in one quarter that something like this would happen.

As far as most people are concerned it is the greed of oil companies like Exxon that are keeping oil prices at high levels in spite of the fact that crude oil stores are almost as high as they were in 1998. I think speculation and high demand have an impact on the market as well and I really don't know who you blame for that.

If the Demcorats promise to cut federal taxes on gas at the consumer level and replace those lost revenues with a windfall profit taxes on oil companies like Exxon most Americans would like that just fine.

I know I called my brother a couple of days ago and told him that thanks to the price of gas it would be this fall before I could even think about coming to Oklahoma to see the family. Not everyone can just blow off price increases like this.

But yes, Democrats refused to allow drilling in ANWR and God knows that was stupid. And the same is true for building refineries and nuclear power plants, but the truth is until prices got high there was no great desire on the part of the electorate for these things either.

Oil companies are not evil, but they are not good either. They are capitalist enerterprises and they don't operate for or care about the public good.

Personally I think that some of the big oil companies did get greedy, because the oppurtunity presented itself and they felt no need to restrain prices in anyway. They went for whatever the market would bear.

"They went for whatever the market would bear."

I sure as hell hope so. Their duty is to their stockholders not to an electorate too dumb to insist upon rationality from those it elects.

To imply an obligation on the part of the oils to lessen the burden upon the foolish doesn't really have an end point, does it?

"X can't afford the products of QRZ Corp., so QRZ has an obligation to lower its prices so that X is not discriminated against because of his lack of money." The proper term for a corporation which would follow that reasoning to conclusion is "bankrupt".

I farmed for years and they called those farm bills the food security act, not the farmer security act. The government intervened in agriculture to make sure that people would be assured with a cheap safe source of food. Shortages were not allowed. Spikes in prices were avoided because they were inflationary etc. We could not just dump milk and drive up prices. I can remember price controls when Nixon was president. For all the complaining about farm subsidies it is all about cheap food. Don't think it is not. Corn and soybeans and other commodities are not allowed to go all over the place like oil. Someone always steps in and slaps that market down.

As for Exxon I refuse to feel pity for some CEO making hundreds of millions of dollars in a bonus just because those meany Democrats are picking on the poor widdle billionaire who could give an Arab shiek a run for his money in terms of sheer unmitigated greed.

You see, the way I look at it, is that if they don't owe the consumer anything, then the consumer does not owe them anything.

Wow! Look at those taxes!!! No wonder Bush is confident about deficit reduction. :)

terrye hits on a good point in mentioning the failure to act on alternative petroleum and other energy sources. With global energy use projected to grow by about 40% between now and 2020, we should be a lot more worried about alternates and a lot less worried about whose backyard we're drilling or in which we're building nuclear plants or erecting wind turbines.

I agree...alternative sources is a great way to solve our energy crisis. To see that the government is taxing the oil industry so much and not using any of that revenue toward the goal of alternative energy sources is infuriating. But at least politicians' pork barrel projects are getting some heavy cash flow. Hmmph.

In the past five years alone, Exxon has paid over $20 million more in taxes than they've earned in the United States. That's over $50 billion! I think $50 billion is more than enough money for the government to invest in alternative sources of energy.

Terrye . . . I don't like paying higher gas prices either and our family will have to start cutting back too because of the rising cost of gasoline but I don't feel the Exxon's of the world are at fault. It's the American way to prosper. That's why millions of people come here to live. If our government is going to tax Exxon because they had excess profits then they better be prepared to tax all companies posting million/billion dollar profits.

Like a couple of you have said we really need to get moving on developing and implementing alternative sources of energy. We have no choice and I would hope that Exxon and its domestic counterparts will continue to invest their money into doing just that.

Oil company profits are huge, no doubt, but they're not out of line with other industires when you compare profit to each dollar of revenue. BILLIONS of people consume their product every day so it stands to reason that their profits would be huge.

Love the graph. Shows how government gets greedier the more an industry makes.

All industries SHOULD make money. If they don't we're all in trouble.

I agree with you-- any legislator concerned with bringing down gas prices should avert their attention from placing unwarranted blame on oil companies and start working on sound, comprehensive energy policy. Things like allowing access to ANWR (like you mentioned) and loosening regulatory hurdles for oil companies could a lot farther in helping us get affordable energy here.