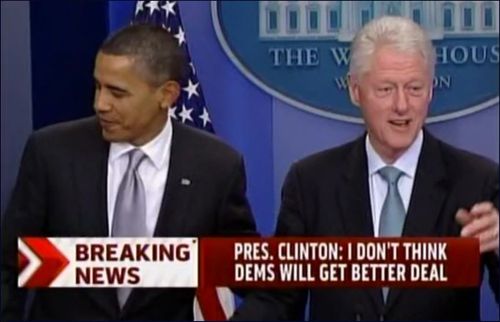 There was to be no press coverage allowed of Obama's meeting with Clinton. No photos, no questions, not even a written statement about what happened.

That changed when Obama and Clinton wrapped up their private meeting in the Oval Office. Clinton wanted to publicly endorse the tax package. Obama is welcoming all the help he can get.

So the two presidents headed straight for the famous briefing room with no warning.

As good as a politician as Clinton is he had to have known how ridiculous that press conference would paint Obama.

From the item quoted above it looks like Clinton may have pushed the idea to appear publically with Obama. Once at the podium he monopolized the microphone and started fielding questions. As entertaining as the part is where Obama says he has to leave, watch the part before that and pay attention to Obama's body language. The further it goes, the less happy he looks.

The screen grab above is from just after Obama said he had to leave and Clinton chuckled, gave a little wave of his hand and joked about it. Contrast their expressions as Obama turns to hurry off the stage and Clinton turns his attention back to the press. One angry, one delighted.

The rest of the press conference was just salt in the wounds. After Obama's two disastrous appearances earlier in the week, Clinton demonstrates how a pro does it. No running off for cookies on his part, instead he delivers a far more effective and gracious defense of the compromise. I wonder if he and Hilary had a good laugh about it afterwards?

I've never seen anything quite like it. Well, we all remember how Obama's campaign treated Bill Clinton. Pay backs a bitch, aint it Barry?
Posted by ambisinistral at 1:04 AM

Email ThisBlogThis!Share to TwitterShare to FacebookShare to Pinterest
Labels: Clinton and Obama presser, Mommy doesn't want to be kept waiting., pay back, Politics

That's a very good analysis, provided the premise about no planned press conference is correct. Body language is important here.

Obama was and remains unprepared to be POTUS at every possible level of the job.

I've been wondering why Obama would do something so seemingly stupid. Not that I buy in to the notion that he's some sort of brilliant (his intellect is painfully ordinary but also painfully twisted), but he ain't stupid.

He may be intelligent to realize he's toxic at the moment. And maybe Krauthammer is correct and this tax deal is a disaster for those opposed to destroying the United States.

Perhaps he knows he can't sell this to the Democrats he needs to vote for it, but Slick Willy can. Being committed to his cause of reparations, retribution and destruction, he just may be willing to appear the complete fool for the sake of success in this particular instance.

I really don't know what to make of that press conference. It was kind of like seeing a flounder ride past on a bicycle -- I saw it, but my brain could make no sense out of it.

I may be overestimating Clinton's animus, it probably was just a case of him never meeting a microphone he didn't love.

That said, I don't think Obama is much of a politician. A major job of his was doling out funds from the Annenberg Grant. That's a situation where people had to kiss his ass to get any money.

I sometimes believe that that's how he thinks governing works -- people kiss the leader's ass or no moola. That fact that it doesn't work that way is what gives him his perpetual deer in the headlights look.

His political education was all Chicago. Not that I am an expert on Chicago but what little I know suggests to me that it the old fascists of the SDS and Weatherman days are well represented and have influence there that is beyond what most Americans can even begin to fathom.

At the top is just ordinary political corruption albeit on a truly grand scale. But nothing that isn't familiar to any Democrat Party machine city. Underneath, however, are what's left of the True Believers, the Carriers of the Flame, run real precincts and dole out real money. You are surely correct that kissing kiester is what Obama expects. He really doesn't seem to understand that there is an actual government that has a structure and processes.

Then again, most Americans don't, why should our POTUS? The LA Times today apparently has a poll showing that My Fellow Citizens are already beginning to sour on the results of electing a Republican House before those who were elected have even taken their seats.

We really need to bring Civics back to our freakin' schools.