So... who did whatever it was that was done? 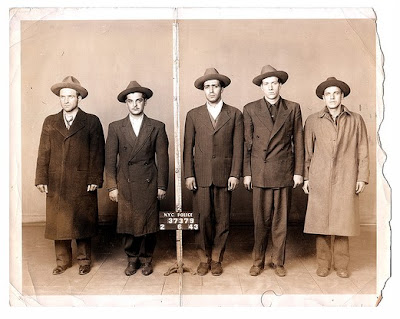 The picture to the right is of a 1943 police lineup in NY, NY. I don't know what the crime was, nor who, if anybody, was ever picked out of it.

Myself, I suspect the guy second from the left just 'cause he looks like a gangster should look.

It is from an interesting Flickr photostream called LeastWanted. The stream is composed primarily of old mug shots, although there are a fair number of old ID pictures, as well as some other stuff mixed in.

It is an altogether fascinating stream, with face after face, some defiant, some forlorn, some rather crazed looking, documenting long forgotten arrests.

That is of course the interest of nearly every old picture -- who are these people, what is the story behind the picture, and whatever became of them? Questions that realistically will never be answered and so we're left, if we care at all, to create a momentary scenario for them before we move on and forget them.

Below is one more picture from the stream. If nothing else, the hat certainly deserves its own story. 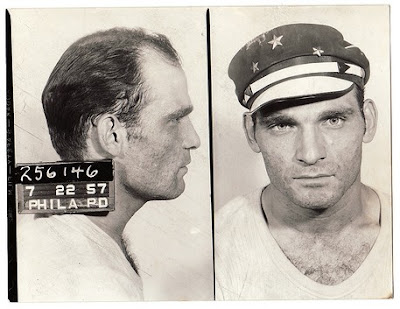 Posted by ambisinistral at 9:39 PM