On Monday, March 9th, the DJIA hit a low of 6,547. It has since risen to a high of 8,574 on May 8th, a rise of 31%. I have yet to see a convincing explanation of what triggered the rise beginning on March 10th but the full court press by the Obama Administration, including Fed Chairman Bernanke's unprecedented "Green Shoots 60 Minutes appearance on March 15th certainly provided fuel for a rally which appears to be based more upon wish than upon reality.

I've been trying to determine just what the "green shoots" to which Chairman Bernanke referred might have been. I've been through the BEA data on the GDP (through Q1 09), the BLS data on the employment situation, the Fed Flow of Funds report for Q4 08 in relationship to its current Consumer Credit report through March and the INDUSTRIAL PRODUCTION AND CAPACITY UTILIZATION report, also through March. In an effort to try and determine where Bernanke saw some green shoots I even combed the Treasury Daily Statements in an effort to find a hint of green in the tax deposit data. I did note a brief rise in tax deposits beginning on March 6th but it was completely and badly reversed beginning on March 20th.

The data for the graph below were drawn from the Daily Treasury Statements. 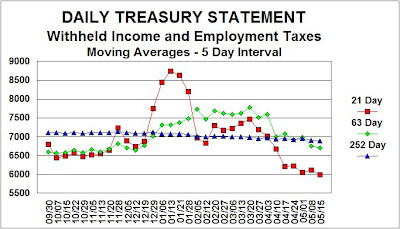 The jibber jabber from the Obama Administation is completely understandable. They prove their incompetence every single day and the smoke they were blowing on March 15th was neither thicker nor dirtier than usual. Lying comes as naturally as breathing to them and the public is finally beginning to apply the appropriate discount to every word emanating from the administration.

The Federal Reserve Board is supposed to be separate from the administration. I'm going to find it very difficult to continue to believe that such a separation exists unless Chairman Bernanke clarifies his definition of a green shoot with attendant data provided regarding the period preceding his March 15th remarks. His apparent donning of a cheerleader costume does nothing to inspire trust. The economy is going nowhere until some degree of trust is reestablished by at least one player in this melodrama. The great cowards of Wall Street aren't up to the task and the gross incompetents within the administration, tax cheat Geithner in the lead, inspire confidence only that massive theft is occurring on a daily basis. It's going to be a very long haul if Bernanke slides into the darkness with the others mentioned.

As an aside - the Treasury tax data is, IMO, the set to watch. I'll believe we've hit bottom when that 63 day average flattens out. Demographics dictates that the recovery, when it finally begins, is going to be weak and 'thin'. The last of the Boomers turn 45 this year while the first are already swelling the number of Social Security recipients. That means that the key (wrt disposable income) 45-55 bracket will shrink just as the number of retirees, watching their spending very carefully, grows. Add the increase in saving occasioned by the huge number of people very close to retirement trying to replenish what used to be healthy 401Ks and the source of funds to fire up the economy really becomes a question mark.
Posted by Rick Ballard at 8:36 PM

Good to see you back Rick. Ambi's been fighting the good fight but things have been slow here nonetheless.

I agree with you that we aren't at the bottom yet. My own sense is that we are in a slow motion train wreak: unemployment heading up, some states effectively bankrupt, and a lot of money tossed into the air in the hope that the wind will carray it somewhere useful.

Hi Luther, thanks. I'm going to try and put up more pieces on the economy as Ogabe and the Obamunists flail away.

The market generally anticipates a turnaround by a few quarters but the rally that began in March appears to me to have been sheer manipulation. The demographic situation militates against economic growth at a rate above about 1.75% (exinflation) for the near and medium (out to 7 years) future.

There is a possibility that Bernanke's appearance (which was taped the Wednesday before broadcast) was given to the WH shills early and that their morning appearances were scripted as "prequels". Bernanke would be wise to but some distance between himself and the Obamunists if he hopes to retain maximum influence with the rest of the Fed governors.