In the early years of the 20th century Witchita County, Texas was experiencing an oil boom. Many people were moving there for jobs and the local infrastructure was stressed, with office space in particular being in short supply.

To solve that problem J.D. McMahon, a Philadelphia developer, proposed building a skyscraper in the town of Witchita Falls and started selling stock in his venture. Investors poured some $200,000 into the venture.

However, when the towering skyscraper was built it was only 40ft tall, rather than the 480 feet the investors expected. Alas for them, the scale on the blueprints was in square inches, not square feet as they thought, and there was no remedy for the swindle.

In its day you could barely fit four desks into one of its floors and it fell into disuse. However, it somehow managed to avoid demolition over the decades, and in 2000 it was renovated and now serves as a tourist attraction and antique shop. 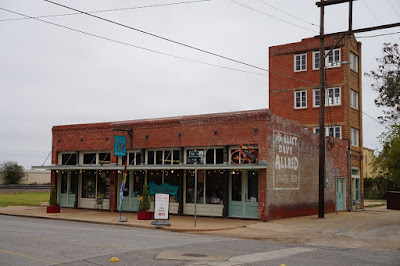 Posted by ambisinistral at 6:25 PM