That's it - I'm canceling my vacation to Ulan Bator. 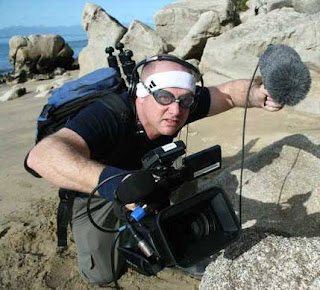 I recently stumbled across an article detailing the plans for an expedition to locate the fabled Mongolian Death Worm.

What is a Mongolian Death Worm you ask?

The Mongolian Death Worm is a creature rumored to live in the Gobi Desert. It is said to hide in the sand and spring out to spit a fatal dose of acid on its prey (which includes humans). Also, if you try to sneak up behind one of the worms it will jolt you with a lethal bolt of lightning it shoots out of its butt.

This summer two New Zealand TV journalists, David Farrier and his cameraman Christie Douglas, have mounted an expedition to try to document one of the beasts. They have already left for Mongolia. Like most of humanity, I'm waiting with baited breath to hear their results.

The accompanying photo is of the camera man Douglas. I assume the microphone is to catch Farrier's screams as he gets fried by an electric bolt, or whimpers as his face is being melted by acid.

Apparently, much like the Grabazoids in Tremors, the Death Worms are attracted to vibrations, so they plan on blasting off a lot of dynamite to attract them. Sounds like a plan to me. You can read more about their expedition, and even donate to it if you're in the mind to fund oddball scientific endeavors, at their website Death Worm 2009.

Posted by ambisinistral at 5:26 PM

Well, if they find any many they can used against all the "protesters and nice people" the Obama administration brings to all the town hall meetings, to plant or overwhelm the citizens that are there for real reasons. Like some real answers and not democrapic gobbly de goop.

Tremors was an entertaining little movie. No doubt wandering about Ulan Bator looking for grabazoids will be equally entertaining.

BTW, you hit upon one of my very favorite nits to pick. It's "bated breath". Unless, of course, you just ate some kellies or squid or nightcrawlers or somesuch.

Speaking of Ulan Bator and grabazoids, I hope at least some of My Fellow Yargbians are attending local Town Halls (hoping to be able to report next week).

Well, they are worms, so baited seemed right.

I made it to the first Tea Party protest here, but no Town Halls. I'm not sure they had one, and my Congress Critter is a Republican, so I'm not sure how much heat there would be.

However, I did contact Obama's Reality Check website to alert him to the dangers of Mongolian Death Worms and insurance agents. Here's what I sent (I'll post if I get an answer):

First off, bless you Mr President Obama for providing a means for little people like myself to express my concerns. Every day I thank God that you defeated Bush, and the so-called 'lady' who killed mooses in the last election.

My main health concern at the moment is Mongolian Death Worms which I just read about. They are five feet long and spit acid onto people for no other reason than they are mean. Presently they live mainly in the Gobi Desert, but I am naturally worried that they might get imported into the U.S.A. like fire ants and killer bees did also once upon a time in the past.

I figure you won't allow that, but my friend who says he is a Republican, but he might be an insurance agent, says that there is no funding in your Health Care bill to prevent that. That doesn't sound right to me, because acid spitting worms sound like a health hazard to me. I think my friend is misinforming me.

Please, can I have you assurance that there is actually funding to prevent Mongolian Worms from being introduced into the ecosystem? We have enough problems the way it is. No need for that too.

Thank you for your time and I look forward to a reply.