The other day I stumbled across Julian Wolkenstein's post Symmetrical Portraits. He took frontal photos of people, and then split the photos in half, flipped them and made images of the people if their face were composed of two left or right sides. I was struck how different the two manufactured faces ended up appearing. Inspired by that, I decided to try my hand with current political types. First I did Barak Obama's official portrait. As with all pictures in this series, the first is his right side and the next his left. The difference in his skin tone between the two pictures is from the lighting of the original picture, I did not adjust it at all. Still, at the risk of being accused of racism, I was amused by how scrawny, dorky albeit friendly looking, the right-faced version of him was while the pursed lips and intense stare of his left-faced version gives off a hint of menace. 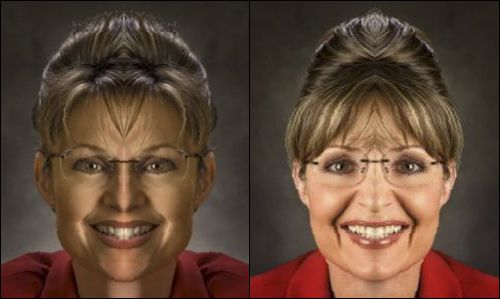 Right-faced Sarah, again because of the lighting of the original portrait, looks like she fell asleep in a tanning bed. Meanwhile, left-faced Sarah looks positively demented with her giant smile and large eyes. 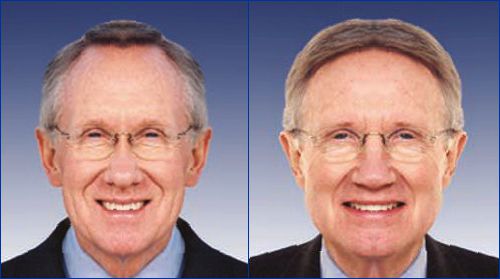 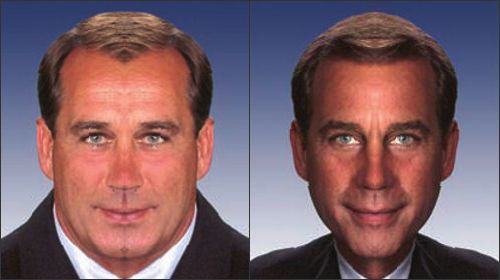 Yikes! John Boehner is either an NFL lineman or a bobble-head doll. Unless his face was titled slightly to the left in the photo I used (and it didn't appear to be), he has a very asymmetrical face to say the least. 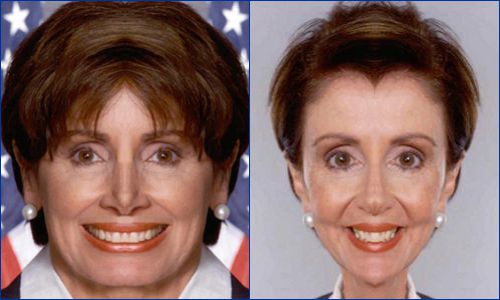 Gadzooks!!!  And I thought Boehner was a asymmetrical. Thick or thin, the right and left faced versions of the botoxed Pelosi both make her look completely bonkers. Hmmm... I wonder if there is a message in that?

I hope you enjoyed this foolishness, but I don't think I dare find out if the two faces of Pelosi can be topped for strangeness.

Posted by ambisinistral at 8:44 PM

Dear Friend,
I’ve greatly enjoyed looking through your blog. I adore your way of presentation.
I was able to get some of the information from your blog as well as by following external links from your blog.
So I have added your link in My Reciprocal Links section. Please check it. If any changes has to be made please mail me. I would be glad if you could provide a link.
It would be great pleasure if you can add my blog. Here is my blog information:
URL: http://satellitesnews.blogspot.com/
I hope you find this link appropriate and useful. Thanks for your help and consideration.

I've been looking at your site for a couple of days now. I do like it. I've added it to our blog roll.

I wonder what a disfigured old coot like me would look like in this analysis. I bet crooked noses and offset eyes and ears don't help matters one little bit.

It was Pelosi's nose that gave me a lot of problems. Her head was slightly tilted to I had to rotate it to get it as vertical as possible. Her nose was crooked and I had a devil of a time finding an angle I could slice her face along.

Looks like Pelosi was turned to face the camera, rather than head-on