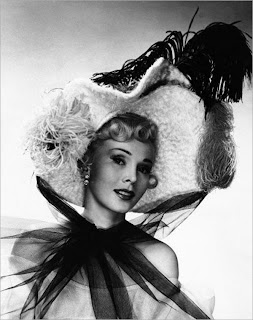 In this Stratfor article George Friedman begins a series that will be an overview of the changing national strategies and regional balances on a global scale. The main areas he's concentrating on are the crisis in Europe, China's slowing economic growth, Iran's ascendance in the Middle East, and the challenges the U.S. faces as these areas go through flux.

Since the article dealt with issues of a planetary scale, I decided that the Hot Stratfor Babe likewise had to be that grandiose, so it was only natural that my mind turned towards that 1954 cinematic masterpiece Queen of Outer Space.

From the film I selected Za Za Gabor for the honor. Technically she isn't the Queen, rather she's a mere courtier to the Queen, but come on... this is Za Za were talking about.

In the film some 1950s style astronauts are headed for a space station when it gets blown up by a death ray. When the death rays seeks them out they open up their ship's throttle, scrunch their faces up to simulate high Gs and pass out from the strain.

When they wake up they find they've crash landed on Venus -- all things considered, a stroke of luck for them that of all of the directions their space ship could have gone off on, it picked the one trajectory that led to a planet. Even more fortuitous, Venus has an atmosphere they can breathe.

They leave the ship to explore the planet and are soon captured by some Venusian babes in miniskirts, high heels. and wearing gobs of makeup. Wondering where the men are, our intrepid explorers soon discover that Venus is ran by a race of Amazons who have eliminated all of the men on the planet.

The Queen, who always wears a mask (gee, I wonder if she was disfigured by a guy at one time?) really, really hates men and plans on blasting apart the Earth with her death ray because the place is knee deep with men. However, upon being exposed to the manly-men of Earth, many of the women, including Za Za, have fallen crazy-mad-in-love with them, so they stage a rebellion and foil the Queen's nefarious scheme.

Queen of Outer Space is a great piece of silly 1950s sci-fi. The science is ridiculous, much of the dialog is comical, the sexual politics are a hoot, and to top it all off,the whole thing is filmed in gorgeous technicolor which is a real rarity for the genre of that era. If you haven't seen it, it is well worth watching.


The State of the World: A Framework
By George Friedman, February 21, 2012

Editor's Note: This is the first installment of a new series on the national strategies of today's global power and other regional powers. This installment establishes a framework for understanding the current state of the world.

The evolution of geopolitics is cyclical. Powers rise, fall and shift. Changes occur in every generation in an unending ballet. However, the period between 1989 and 1991 was unique in that a long cycle of human history spanning hundreds of years ended, and with it a shorter cycle also came to a close. The world is still reverberating from the events of that period.

On Dec. 25, 1991, an epoch ended. On that day the Soviet Union collapsed, and for the first time in almost 500 years no European power was a global power, meaning no European state integrated economic, military and political power on a global scale. What began in 1492 with Europe smashing its way into the world and creating a global imperial system had ended. For five centuries, one European power or another had dominated the world, whether Portugal, Spain, France, England or the Soviet Union. Even the lesser European powers at the time had some degree of global influence.

After 1991 the only global power left was the United States, which produced about 25 percent of the world's gross domestic product (GDP) each year and dominated the oceans. Never before had the United States been the dominant global power. Prior to World War II, American power had been growing from its place at the margins of the international system, but it was emerging on a multipolar stage. After World War II, it found itself in a bipolar world, facing off with the Soviet Union in a struggle in which American victory was hardly a foregone conclusion.

The United States has been the unchallenged global power for 20 years, but its ascendancy has left it off-balance for most of this time, and imbalance has been the fundamental characteristic of the global system in the past generation. Unprepared institutionally or psychologically for its position, the United States has swung from an excessive optimism in the 1990s that held that significant conflict was at an end to the wars against militant Islam after 9/11, wars that the United States could not avoid but also could not integrate into a multilayered global strategy. When the only global power becomes obsessed with a single region, the entire world is unbalanced. Imbalance remains the defining characteristic of the global system today.

While the collapse of the Soviet Union ended the European epoch, it also was the end of the era that began in 1945, and it was accompanied by a cluster of events that tend to accompany generational shifts. The 1989-1991 period marked the end of the Japanese economic miracle, the first time the world had marveled at an Asian power's sustained growth rate as the same power's financial system crumbled. The end of the Japanese miracle and the economic problem of integrating East and West Germany both changed the way the global economy worked. The 1991 Maastricht Treaty set the stage for Europe's attempt at integration and was the framework for Europe in the post-Cold War world. Tiananmen Square set the course for China in the next 20 years and was the Chinese answer to a collapsing Soviet empire. It created a structure that allowed for economic development but assured the dominance of the Communist Party. Saddam Hussein's invasion of Kuwait was designed to change the balance of power in the Persian Gulf after the Iraq-Iran war and tested the United States' willingness to go to war after the Cold War.

In 1989-1991 the world changed the way it worked, whether measured in centuries or generations. It was an extraordinary period whose significance is only now emerging. It locked into place a long-term changing of the guard, where North America replaced Europe as the center of the international system. But generations come and go, and we are now in the middle of the first generational shift since the collapse of the European powers, a shift that began in 2008 but is only now working itself out in detail.

What happened in 2008 was one of the financial panics that the global capitalist system periodically suffers. As is frequently the case, these panics first generate political crises within nations, followed by changes in the relations among nations. Of these changes, three in particular are of importance, two of which are directly linked to the 2008 crisis. The first is the European financial crisis and its transformation into a political crisis. The second is the Chinese export crisis and its consequences. The third, indirectly linked to 2008, is the shift in the balance of power in the Middle East in favor of Iran.

Read the rest of The State of the World: A Framework at Stratfor.

Posted by ambisinistral at 5:34 PM