What an absolute disgrace 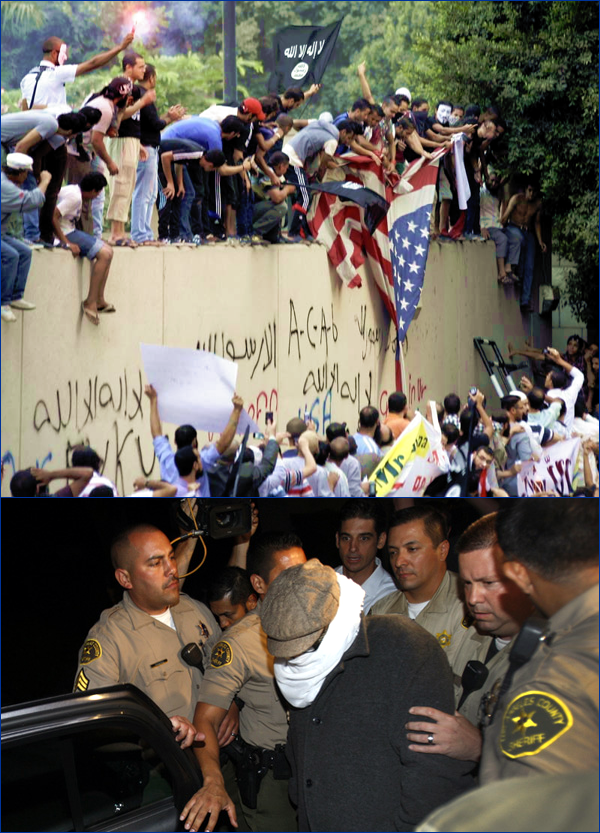 How in the world does the top picture lead to the bottom? Obama responds to an attack on American embassies with a midnight knock on the door of somebody who posted a YouTube video? What an absolute disgrace.

The flimsy excuse for the region-wide and supposedly spontaneous Islamic protests was some obscure film that 'offended' the so-called prophet Mohamed. Only an idiot would have given any credence to that story. In fact, these were coordinated attacks, one of which led to the the murder of one of our ambassadors, and they were obviously timed to occur on the 11th anniversary of 9/11. We've now learned that warnings were given of such a possibility.

In the face of all that, since day one, Obama's administration has been treating seriously the claim that this is all about some YouTube video. In a time where it may just pay to have Middle Eastern governments, who are the ones that can dispel those rioters in a heartbeat after all, to be worrying about what sort of angry response the U.S. might adopt, we have Obama and company ignoring the reality of the First Amendment and enabling the protests by harassing a YouTube filmmaker.

It is the price of having a fool in office who knows how to campaign, but not how to govern. In a post called Obabbler's speech I said this:


Obama gave his big Middle East speech today. My reaction to it is colored by my suspicion, which I cannot shake, that Obama has largely dialed out of the foreign policy component of the Presidency.

The initiatives he tried to implement in the beginning of his Presidency have all been reduced to a shambles; and rather than rethink his policies, the biggest Brainiac in the Universe has simply shoved the mess aside. Out of sight, out of mind.

My belief is that when he clocked out of directing foreign affairs other elements in his administration began to, in the resulting power vacuum, struggle with each other over the direction of America's policy.  I think you see this in the confused response to the Egyptian crisis, then in the dithering and eventual incomprehensible intervention as Europe's lapdog in Libya, and in the US's obvious uncertainty as to what to do in Syria. Even the multiple and conflicting stories that came out of the raid that killed Bin Laden point to multiple sources pushing multiple narratives.

As a result I thought he speech was a bit of a hodgepodge: his Howard Zinn-like understanding of history as a pastiche of exploited fuzzy-wuzzies, mixed with the Clintonista's pro-Arab slant, mixed with the State Department's usual inertia.

I still think that is true. Obama has been skipping his intelligence briefings for some time, he is so little interested in the rioting that he's not stopped campaigning and fundraising, the State Department appears to be frozen with indecision as it flounders in contrary directions. And the media in all of this? About as useful as tits on a bull.

Posted by ambisinistral at 7:32 PM

Presumably, the person whose face is hidden in picture two is a felon currently on parole who told the AP and WSJ that he was an Israeli who'd made a movie with the financial backing of 100 Jews on the same day that picture one was taken.

Manufacturing outrage. It's a game that two (or more) can play.

This is the United States. The film-maker has a right to his opinions and the right to express them.

That aside, my post was directed at the Obama administration's response to the crisis. Flying to Las Vegas for a fundraiser was politically tone deaf and appalling, trying to blame some obscure YouTube video for the failure of his administration's pre-9/11 intelligence and planning is disgusting and, in effect kowtowing to the mobs that ransacked our embassies by hauling in this fellow at midnight is beyond the pale.

I don't care about Nakoula Basseley Nakoula, or his film, or his police record. I do care about how our government responds to serious crisis.