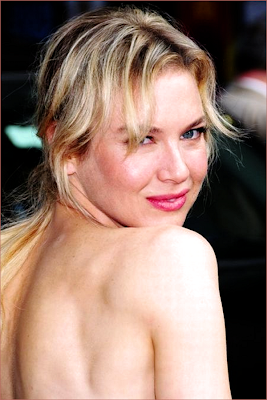 In this Stratfor article Ben West discusses the September 15th arrest of Adel Daoud, a wanna-be jihadist, in Chicago.

He had planned to detonate an IED outside of a chicago bar, but it turned out that the FBI had been tracking him and that they had provided him with a dummy IED and arrested him as soon as he tried to trigger it.

It is an interesting article. It covers how and why he came to be on the FBI's radar, and the steps they took to ensure that he would have, at best, a weak entrapment case.

For the article's Hot Stratfor Babe, since the arrest took place in Chicago the movie Chicago naturally sprang to mind. After careful consideration, and mindful of the fact I should pick a blonde before Strafor heads back to Asia, Africa, the middle East or Latin America, I selected Renée Zellweger for the singular honor.

Ms Zellweger has had a solid and successful career. I've seen her in a few films and she has an appealing screen presence. She can be considered an A-List actress by today's standards. She's been in film for 20 years already and she's gotten over the hump of age 30 that torpedoes so many actresses, so I expect she'll continue to have success in the film industry.

On the evening of Sept. 15, Adel Daoud parked a Jeep Cherokee loaded with a large explosive device outside a bar in downtown Chicago. As he walked down the street away from the vehicle, he activated a trigger to detonate the bomb. The bomb, however, was inert, and FBI agents positioned nearby immediately took Daoud, an 18-year-old from the Chicago suburbs, into custody.

Daoud had been the subject of a four-month FBI investigation and sting operation, during which undercover agents had been communicating with Daoud and recording his statements. Sting operations have become the tactic of choice for the FBI and other U.S. law enforcement organizations when investigating would-be jihadists. As U.S. law enforcement agencies perfect their sting operations to identify aspiring jihadists and prevent attacks, jihadists, too, can be expected to innovate and evolve alternate means of communication and vetting of those with whom they collaborate.

Daoud was a typical aspirational jihadist. He read Inspire magazine (an online jihadist publication), watched jihadist training videos, cited arguments from the late Anwar al-Awlaki, participated in jihadist forums denouncing U.S. policy and justified attacks against U.S. citizens. He was not shy in voicing his intent to kill Americans in retaliation for the wars in Afghanistan and Iraq.

Daoud tried to recruit at least six people over the span of seven months to help plot an attack against the United States before he crossed paths with an undercover agent on the Internet around May 2012. Based on records later obtained by investigators, Daoud did not appear to have any hard skills to conduct a bombing attack. He downloaded several instructional documents and videos on how to make explosives and build bombs, but there is no indication that Daoud attempted to make any weapons himself. Instead, he talked about going to Saudi Arabia or fighting in Yemen, although he expressed a desire to conduct attacks in the United States before going abroad.

By himself, Daoud was still a long way from posing a direct threat to the United States, but he was bent on conducting an attack. Along the way, he made a number of mistakes. For one, it is apparent from Daoud's conversations with the undercover agent, documented in the Sept. 15 criminal complaint, that Daoud did not heed all of the advice that he read in Inspire magazine. Over the years, Inspire has emphasized that big, elaborate attacks are risky, expensive and hard to put together. One of the magazine's main contributors, Nasir al-Wahayshi, has argued that small, simpler attacks such as the Fort Hood shooting in 2009 are much easier to execute, are more effective than bombings and do not open up aspiring jihadists to discovery by the authorities during the planning stage.

Daoud unequivocally rejected the idea of a shooting attack, even mocking the July 20 shooting that killed 12 people at a movie theater in Aurora, Colo. Daoud insisted on carrying out a spectacular attack, killing "a lot of enemies" and making headlines worldwide. One of the characteristics of dramatic attacks of the sort Daoud envisioned, however, is that they are difficult to execute alone -- especially if the individual doesn't know how to make explosives or a bomb. Early in Daoud's planning, he saw it necessary to reach out for help, which helped to tip off law enforcement agents.

Rather than immediately arresting Daoud and making a weak case to a federal judge based on an 18-year-old's online rants, investigators continued to monitor Daoud, seeking more evidence to make a stronger case and get a more severe sentence. The FBI set up a sting operation, during which authorities recorded Daoud plotting an attack with an undercover law enforcement agent. The FBI also watched Daoud conduct surveillance on the bar he intended to attack. In a textbook sting operation targeting an aspiring jihadist, an undercover agent offers the suspect an explosive device (or other deadly weapon). As soon as the suspect attempts to use the inert explosive device, authorities have all the evidence they need to charge the suspect with attempt to use a weapon of mass destruction. The FBI has conducted dozens of these sting operations, where it finds an individual who self-identifies as an aspiring jihadist and then uses informants or undercover agents to collect more evidence against the suspect. Many of those put on trial have received 20- to 30-year sentences.

While the government's pursuit of an incompetent, would-be jihadist may seem extreme, individuals like Daoud (known in some law enforcement circles as "Kramer jihadists," after the bumbling character from Seinfeld) have posed a threat before when they have linked up with competent jihadist operatives. For example, the FBI conducted surveillance on the group that would conduct the 1993 World Trade Center attack but dropped the investigation when the informant turned out to be problematic and when it was determined that the group did not possess the skills to pose a threat. Later, the group met Omar Abdel-Rahman (also known as the Blind Sheikh), who arranged for competent jihadist operatives -- Abdul Basit (also known as Ramzi Yousef) and his partner, Ahmed Ajaj -- to come in and lead the group of amateur jihadists. Under the leadership of Basit, the group transformed into the terrorist cell that successfully attacked the World Trade Center.

Other jihadist operatives, such as Richard Reid and Umar Farouk Abdulmutallab, were similarly incompetent but became dangerous when competent bombmakers and operatives exploited their willingness to conduct jihad. Given these past failures, U.S. counterterrorism officials have no appetite for letting aspiring jihadists slip through the cracks just because they appear incompetent on the surface.

With the investigation under way, the FBI initiated its efforts to dispel any inklings of coercion. Defense attorneys, civil rights groups and some in the media have alleged that FBI sting operations targeting aspiring jihadists are entrapment -- where law enforcement agents coerce an individual who would not otherwise have posed a threat into an illegal act. The FBI's handling of Daoud's case shows that it is taking steps to combat these charges.

Several times during recorded conversations, the FBI undercover agent gave Daoud opportunities to back away from his planned attack. The agent cited Ramadan as a reason to delay the attack and further delayed by fabricating excuses, such as needing to wait for approval from his sheikh. On at least two occasions, the undercover agent directly asked Daoud if he was sure he wanted to carry out his attack. The agent emphasized that Daoud had to have jihad in his heart in order to carry out a justified attack. He stressed that Daoud couldn't be pressured into the attack, that he had to be completely self-motivated to execute it. Any outside help would be just that -- help, not coercion.

As stated above, this step was likely included deliberately. Entrapment has been raised as a possible defense in the upcoming trial of Mohamed Mohamud, the 21-year-old Somali-born American accused of attempting to bomb a Christmas ceremony in Portland, Ore., in November 2010. Even though the entrapment defense hasn't proved to be successful, to avoid a recurrence of this defense in Daoud's case, the undercover agent cleverly used jihadist principles to get Daoud to emphatically show that he wanted to commit an attack himself and that nobody was forcing him to do it. Recordings of these conversations will make for a more solid case when prosecutors put Daoud on trial in the coming weeks or months.

The Effectiveness of the Sting

U.S. law enforcement agencies have been extremely active with these types of jihadist sting operations, especially in the past three years. While most of the suspects that the stings involve do not appear to pose a serious threat at the outset, aspiring jihadists can be dangerous if they encounter the right people with the right tradecraft.

In addition to being an effective law enforcement tactic, sting operations also threaten the integrity of jihadists' communication channels. Such operations will increasingly make aspiring jihadists skeptical of the person to whom they are speaking. In Daoud's case, he told the undercover agent that one of his contacts thought he was talking to a spy. Daoud's sheikh, who was not aware of the planned attack, also repeatedly discouraged him from talking about jihad and violence. Others around him knew the risk of discussing plans of attack, but Daoud persisted due to his inexperience.

U.S. law enforcement's struggle with aspiring jihadists will be a drawn-out affair, punctuated by action and counteraction. The FBI and other U.S. agencies are refining their skills in sting operations, which have proved to be an effective tool for pre-empting terrorist attacks. The success of these stings will plant doubts in aspiring jihadists' minds about who they can trust, further complicating their efforts to conduct dramatic attacks. Now the onus is on the jihadists to adjust. They can be expected to implement alternate methods of communication and to step up efforts to verify one another's identities to avoid detection and arrest.

Aspiring Jihadist Arrested in Chicago is republished with permission of Stratfor.
Posted by ambisinistral at 7:53 PM