From Egypt (Big Pharaoh) a demonstration against Islamist violence against the Copts: 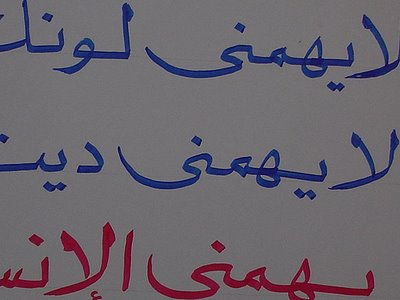 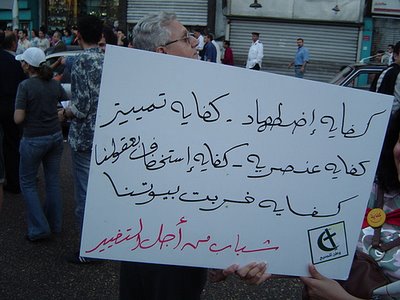 "Enough persecution, enough discrimination,
enough racism, enough underestimating our intelligence,
enough you have destroyed our homes. Youth for change."
(Oh, and notice the cross and crescent sign in the corner.)

From Iraq the Model (emphasis mine):

Posted by Charlie Martin at 7:54 PM

Thanks for posting this StY. Not bad news at all with which to end the day.

The cross and crescent symbol comes from Lebanon, look at the photos in this Michael Totten post. It is interesting to see this symbol get picked up in Egypt. I have to say the demonstration looked pretty small, although bigger than the others the Big Pharaoh has posted photos of. I'm glad someone is making the effort. Tough job.

I'll be in Egypt in 3 weeks and I hope things calm down there.

Notice that the signs are actually in Arabic?

You know, Terrye, that's such a good point that I sat here for at least 30 seconds saying "huh?" until I got it.

yes, exactly. Those signs aren't for US consumption, like the ones we see so often. Those are for making a local point.

Yes, they did it for each other.