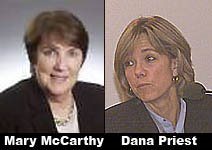 Finally some action taken against a CIA leaker. A CIA employee was fired on Wednesday for providing classified information about rumored secret CIA prisons in Eastern Europe to Washington Post reporter Dana Priest.

The terminated employee, identified as Mary McCarthy, worked in the CIA's inspector general's office and had worked for the National Security Council under the Clinton and George W. Bush administrations.

McCarthy is now being investigated by the Justice Department for possible criminal prosecution.

Ironically, word about the firing came as the result of another leak from anonymous sources, and was confirmed by CIA spokeswoman Jennifer Millerwise.

McCarthy may have had more than a dozen unauthorized contacts with Priest and may have revealed information about other subjects as well.
Posted by brylun at 4:23 PM

I wonder how Priest will look in felony orange? She may want to darken her hair a little for better contrast.

gosh, i wonder which way she leans politically??

Rick, thanks for the tip. I fixed the picture and the article to reflect the update.

I hope they actually do prosecute Priest. The legal basis is there. But is the political will?

I'm not sure. She and her husband gave a total of $4k to Kerry and she gave another $500 to the DNC but I don't want to make a rush to judgement.

The problem is that I can't find a law that she has broken in Chapter 37. That's why our great national brothel on the Potomac works in the manner that it does.

Don’t worry, I will do it for you. Mary McCarthy is almost certainly an elitist Democrat who believe that she possesses the true political faith. She therefore perceives herself as an anointed one who is above the laws devised for lesser human beings.

And remember, as a lefty at Tom's blog said, 'but she didn't out a NOC!

Each and every report I saw about this on CNN and MSNBC mentioned Plame as well.

The difference here is not the NOC, it's the damage. Was it Goss himself who said this damaged our relationship with some foreign intelligence services? Time of war that's extremely serious.

I read part of her duties were in investigating possible prisoner abuse in Iraq. Wonder if she knows Sy Hersh?

A Pulitzer for Priest.
Seriously, Hewitt had Lovejoy from Columbia Journalism Review on, and there really are no secrets that are off the table in their mind, although he is to subdued in his stonewall to say it.
Hugh's next caller said it best:
Hewitt kept upping the stakes and the guy remained non-commital.
Finally he got to launch codes for Nuke Missiles:
Still couldn't decide!
Jay Rosen thinks there's no way she'll be punished, and that it is up to the govt to out her.
Suicidal Nation.

There is neither law against nor penalty for sedition. The journos know it and the pols know it.

We must wait to see what reward the public grants to those who flirt with treason.

In my previous post in March on the New York Times and Keller, Risen and Lichtblau, there is an article from Commentary and some cases that should be considered for a prosecution of McCarthy and Priest.

798 looks like a very tight sqeeze for McCarthy unless something to do with communication in the narrow sense of its definition within the statute applies. I'll reread that Commentary piece but I remember thinking that it would fit Risen, Lichblua and Keller to a tee just because of the communication aspect.

793(d) is clear about the photos and 641 hangs up on 'thing of value' - which I believe relates to the photos themselves and the fact that he was paid for them.

It's a very curious situation and I think that 'information' purveyed without financial gain is going to be a tough nut.

But I think there's enough in 793(d) to get McCarthy: "document, writing" or "information relating to the national defense." And 641 is the routine theft of government property.

I think based on Morison that the Justice Department can put McCarthy away for many years. And doing just that will have a very chilling effect on other potential leakers.

Now Priest is more problematic, at least according to Gabriel Schoenfeld's Commentary article. 793(e) would apply to Priest, and it's probably worth a try given the Supreme Court's current makeup.

"Thing of value" - consider how much it would cost to get that info on your own.

I don't think a judge would find the information McCarthy leaked to be valueless (unless it's a Clinton judge).

And I can't believe that they would just fire McCarthy and let it go at that.

I can't wait for the next shoe to drop: Risen and his leaker.

That's cheering news. I wonder if it has been tested?

"It's a very curious situation and I think that 'information' purveyed without financial gain is going to be a tough nut. "
---
Either Lovejoy or Rosen were looking at it as an
Intellectual Property Matter!
Life and Death, of course,
DON'T MATTER!

Whether they can put her in jail or not, simply making her known to the public destroys her usefulness as a mole.

“Whether they can put her in jail or not, simply making her known to the public destroys her usefulness as a mole.”

If nothing else, she has probably lost all of her benefits. My guess is that she may only be a few years away from retirement. On top of that, the doors in the private sector will be shut tight. The leftist establishment can only take care of so many of its “brave heroes."

Mary McCarthy will also not be able to earn money via a major book deal and the lecture circuit. She is royally screwed in this regard.

From what I hear this is only the beginning.

apparently, she also gave $5,000 to the Ohio Democrats before the 2004 election.