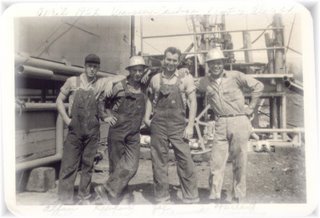 My Daddy is the good looking one.

He would be critically injured on a rig just like this one two years after this picture was taken. The company, Viersen-Cochran Drilling Co. had neglected to replace a chain holding the block used a counter balance. The chain broke, the block fell and my father was the man it hit. It cracked his skull, broke 6 ribs, punctured a lung, broke his collarbone, broke his pelvis, broke his right leg, shattered his knee cap and split his foot in half. He was 28 years old. That is what saved his life. The company told my terrified 23 year old mother they would get him the best of medical help if she signed a form saying the family would not sue. She did and they brought doctors from all over the country to Oklahoma City to work on Daddy. He survived and they called him the Walking Miracle.

But he was never the same. I was a very young at the time, not quite three..but I can remember going to the hospital and seeing the nuns in the black habits gliding down the halls like great black birds and seeing my father in that white bed with the crucifix on the wall. I did not recognize him until he began to weep.

Later when my Daddy went to work selling oil tools I would go to the rigs with him. He would take a box of work gloves and a cooler of Orange pop and crushed ice with him and I would sit in the dog house with the men and watch them put out cigarettes on the palms of their work worn hands. To this day I can still remember the smell of crude oil and hot metal and sweat.

These are the kind of men who worked the oil fields back in the day when they called such people oil field trash. God bless them. We may never see their kind again.
Posted by terrye at 2:56 PM

What a wonderful story. Quite the man. But yes - we do see their kind, right now. I knew them on the railroad and driving trucks and working in disasters. They are the guys on the fishing boats that leave Seattle for the Bering Sea and who work on the oil rigs and in the mines of Alaska. And that is just what I see in my part of this continent.

They are still very much among us. Good thing, too. Just ignored by the media and therefore not in the public eye.

When I'd go with my dad down to Alabama to visit his family I was always fascinated by their hands. Their palms were like leather and it seemed they all had one or more fingers bent in some odd way.

It seemed like everyone had some injury that was never properly fixed. Uncle Thusandsuch's one leg was short 'cause he'd broken it. Things like that were especially interesting to me 'cause I was forever breaking bones and none ever wound up shortened or wildly crooked. Someone else was missing a hand lost to a cultivator. And so on.

There are, as Skook points out, still people who live hard lives and are proud of it. Once upon a time, though, such things were ordinary. Life used to wear people out. If they lived to 65 they weren't playing golf and traveling the world. We don't even have a clue what a luxury liner we're sailing on anymore.

I saw young guys like your Dad, great men actually, in Vietnam. Some didn't go home. In comparison with those unlucky heroes, you are fortunate that your Dad survived. Even after the serious accident, I hope you have some very fond memories of him.

The guys like your Dad are the ones who always save us in the end. Take the hurricanes. After the citizens have poured down the freeways getting out during the evacuations, it is guys like your Dad who come back in to do the work.

Performing blue collar work in the oil industry is still quite dangerous. A “minor” mistake can easily lead to a catastrophic accident. There are some jobs that can never entirely eliminate the physical risks. I used to be a merchant marine on the Great Lakes. A number of my buddies were severely injured. I came close to losing my own life twice in a relatively short period of time. My safety chain broke and I was almost fell onto the conveyor belt. This would have resulted in my instantly being crushed. And yes, it would have definitely been a closed casket affair.

Yes, I did have some memories. My Dad was in the war, at the very end. His three brothers were in the service too. My Uncle Robert came back in bad shape, but he came back.

I hope you are right.