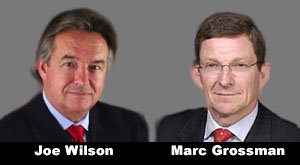 Strata-Sphere is asking some interesting questions about the relationship between Joe Wilson and Marc Grossman. A summary:

"1) Grossman held the same position in the Turkish Embassy Joe Willson did in the Iraqi Embassy at the same time during Gulf War I. (I bet they met!)

(2) Grossman was in charge of the European area for State when Valerie Plame was under cover in Europe and pulled out due to the Aldrich Ames leak. (I bet they met!)

(3) Who else would Wilson call in the State Department in spring 2003 whom he knew well enough and who was high enough in the ranks to pass a threat to Condi Rice to set the record straight on the SOTU or else?"

These individuals are starting to remind me somewhat of Alger Hiss. They attended the “best schools” and perceive themselves as elitists who know so much more about the world than the rest of us. Betraying America’s institutions is deemed justified. Has Joe Wilson consciously sold our country out to our nation’s enemies? No, but he did everything he could to curry favor with our own leftist establishment.