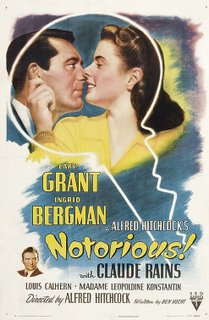 No, thank you. I don't go for patriotism or...or patriots.

I could dispute that with you.


It's been a few weeks since the Writers Guild of America released its list of the 101 Greatest Screenplays as selected by a vote of members of both the east and west branches. Premiere Magazine devotes five pages to the first 25 movies in the issue that went on sale earlier this week. As lists go it's nothing special. I would personally have warned the participants that the criteria were going to be modified to make it a list of screenplays for English-language movies only, for only two non-English-language movies, La Grande Illusion at #85 and 8 1/2 at #87, are among the 101 top vote-getters.

My first inclination was to do mini-reviews of the two movies I believe least deserve to be on the list, but the more I thought about it the less it appealed to me to watch—and then write about—Broadcast News and Thelma & Louise. On the other hand, for whatever reason, 101 screenplays are on the list and the screenplay which became Notorious occupies that one additional spot and that one additional movie is one I did want to write about (presumably just before August 15th—the 50th Anniversary of its premiere.) 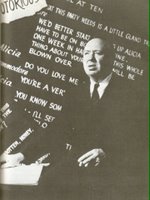 In 1962, Francois Truffaut spent 50 hours interviewing Alfred Hitchcock in the latter's office at Universal Studios. They and their translator went movie by movie through the director's career. When they arrived at his second 1954 release, the French journalist-director-actor began by saying: "My two favorite Hitchcock pictures are Notorious and the one we're going to talk about now, Rear Window." They're my favorites too.

I'm unable to think of a better title for Rear Window. Yet Notorious is a rather poor title, primarily because it highlights one of the few weaknesses in the screenplay: American officials think the Ingrid Bergman character Alicia notorious, but they are the only ones who do. The gossip about her personal life is never heard by the Germans in Brazil. "The story of Notorious is the old conflict between love and duty," Hitchcock remarks to Truffaut when they're discussing the movie. I agree, and had I the chance to re-title it with a single word, it would be Patriotism. 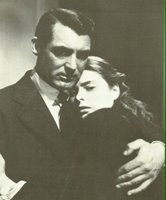 You don't think a woman can change?

Sure, change is fun, for awhile.


Now to the movie. Hitchcock and Ben Hecht, the credited writer, began with a short story given to them by a producer. They retained an idea (girl sleeps with spy to get secret information) and got to work. Somewhere along the line it was decided that Ingrid Bergman and Cary Grant (both of whom had once worked for Hitchcock, but had never worked together) would play the girl, Alicia Huberman, and her handler, T.R. Devlin, respectively. The MacGuffin, i.e., the movie device (secret information) whose only importance is to advance the story, eventually became uranium samples in a wine bottle. In 1944 the atom bomb was at best a rumor, but a rumor which had reached Hitchcock's ear. David O. Selznick the producer did not understand and could not be made to understand how unimportant the MacGuffin was. The project was eventually sold to RKO, either because Selznick needed money to complete Duel in the Sun, or because he had no confidence that it would play. He should have had some idea by the time he sold it because with Hitchcock the movie was always largely complete and in the screenplay before actual filming began. 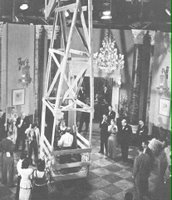 Notorious tells its very old story very simply. The movie begins in a specific time and space. A title card reads: Miami. Florida. Three-twenty P.M., April the Twenty-Fourth, Nineteen Hundred and Forty-Six..... One hundred or so minutes later a door closes. In between a woman of dubious repute, a woman whose father has gone to jail for treason against the United States, is recruited to find out what a group of Germans in Rio de Janeiro are up to. She and her handler fall in love, but the circumstances of the assignment make it impossible for them—and especially for him—to give themselves over to that love. They both must change; she changes first. The movie ends when he chooses her over any hope of completing the assignment. The point of no return for his change isn't reached until he keeps their target Alexander Sebastian (played by Claude Rains) from joining them in the car.

Bergman and Grant play characters. There is none of the "star making the requisite gestures to acknowledge his or her audience" here. All the seriousness of their situation shows in their faces, if not always in their words. The most dynamic of the scenes are made so by camera movement rather than by editing or surprising points-of-view. The long take of them necking while they make dinner plans and he calls to retrieve his messages is justifiably famous. So is another which will be described shortly. 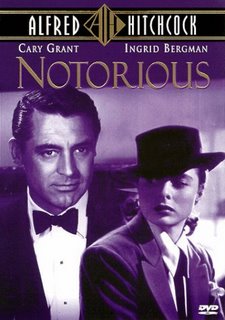 This is a very strange love affair.


Bergman and Grant were never romantically involved off-screen. They would work together only once more in the pleasant but instantly forgettable Indiscreet. Notorious was enough. Grant was heard to say shortly after they had finished filming: "I think the Academy ought to set aside a special award for Bergman every year whether she makes a picture or not." He agreed to accept, should she win, the Academy Award she won for Anastasia in 1957 because he didn't want to risk having someone else get up and say "We forgive you" after all the unpleasantness that resulted when she left her husband and child to live with and become pregnant by Roberto Rossellini in 1949. They were visually recorded together for the last time when the American Film Institute (AFI) gave Alfred Hitchcock its seventh annual Lifetime Achievement Award.

We must leave you now, but thanks to film, Hitch's work never will. Now there's just one little thing I want to add before we finish this evening.

You remember that agonizing shot when you had built some kind of elevator. It was a basket or something with you and the cameraman and you were shooting this vast party in Notorious. And you come zooming down with your elevator and all the way down into my hand, where you see the key in a close-up.

Now, well, you know that Cary stole that key after the scene. Yes. And he kept it. He kept it for about ten years. And one day he put it in my hand. And he said 'I've kept this long enough. Now it's for you. For good luck.' I've kept it for twenty years. And in this very same hand there is the key.

It has given me a lot of good luck and quite a few good movies, too. And now I'm going to give it to you with a prayer that it will open some very good doors for you, too. God bless you, dear Hitch. I'm coming to give you the key.

With that the mistress-of-ceremonies, Ingrid Bergman, brought the evening to a close by making her way back to the main table to give Alfred Hitchcock, with Cary Grant standing to his immediate left, a hug and a key*.

There are two DVD versions of Notorious. I, Netflix, and every DVD rental and retail outlet I visited during the past few days have the Anchor Bay version. It includes no extras. There is a Criterion Collection version which includes many extras. Good luck and good hunting.


*Ingrid Bergman realized it was the wrong key midway through her closing remarks. She mailed him the right key and an apology and after another couple of letters finally received a reply: I got the key.
Posted by MeaninglessHotAir at 9:14 PM

Claude Rains and that weird mother of his got it in the end though, didn't they?

That is implied but never stated. Part of the beauty of the older movies, where they don't hit you over the head with it several times. It gives you a good feeling going out because your intelligence as the audience has been complimented.

Inspired by this review I watched the movie last night. I thought I had seen it before but I hadn't. Yet another gem I had missed passed along to me by Loner. Thank you Loner, you have enhanced my life.

There's no doubt it's a good solid movie albeit a little dated. But dated in a good way. I think it's important to remember that the people in the 1940's were as close to us in time (and hence in attitude) as they were to the people in the 1880's. Think about that for a minute.

The precise manner in which a film shows its datedness gives us valuable insight into a previous time.

The whole "notorious" schtick almost completely goes over the head of the modern audience. We've seen so many movies of high school girls "getting it on" for so many years that the whole concept of a woman being a "tramp" is almost completely lost to us. It's a foreign language. We have to work hard to even imagine what they were thinking, much like trying to put ourselves into the heads of ancient Chinese emperors. We can try, but how likely are we to really succeed?

The Bergman character marries the baddie to get the secrets and we think--why did she bother to marry him? Why not just rent a motel room?

And we the modern audience are so jaded in so many ways. The tension as the Germans look at the Claude Rains character is largely lost on us. Of course they're evil. They've been demonized by Hollywood for so long that if they don't eat brains for breakfast we're surprised. Of course they're going to condemn him to death by torture--what else would they do? Why the surprise? To the modern audience, Germans plotting murder is a cliche not a plot device.

But dated in a good way.

Heh. I haven't seen the movie but the posted pictures immediately caught my attention: Cary Grant was handsome, Ingrid Bergmann was beautiful, and they both look like adults. I don't see that in many movies these days, the protagonists tend to look like kids, aging kids perhaps, but kids nonetheless. Kids can't be handsome and beautiful, at best they achieve cute.

I think you've hit on something deep there. Think of one of Hollywood's current top stars, John Cusack. He plays the same confused kid in movie after movie, exhibiting the same puerile and overgrown adolescent attitude to everything life throws at him.

When I look at all the aging hippies in Boulder (some over 70 now!) I think we've definitely become the Land of Peter Pan. Hollywood, as always, gives us what we want.

I swoe to myself that I would not be one of those women who refuses to show her age. it is just so tacky to try and look like a teenager.

They were the real deal.

There are a couple of other anachronisms that I noticed. The Miami of 1944 was apparently an all-white place without a single black or hispanic face. Everybody spoke English. Havana was a short wonderful boat ride away and a great vacation spot (evidently the Cozumel of its day). Rio was nice and clean and safe and filled with Europeans. It didn't know smog. Florida was filled with empty beaches that were completely in the countryside because nobody had built on them yet.