He must be an awful dope

Sailor Boy Bill goes on shore leave with a cocky attitude and seven months pay on him. He meets a friendly young lady in a bar and gets drunk. What could possible go wrong?

Posted by ambisinistral at 9:06 AM No comments:

Welcome To The Machine

Get ready for a compliant weekend with Musicfor Korydallos.

Posted by ambisinistral at 7:04 AM No comments:

The walk starts in a regular market in Bangkok, Thailand and the moves to the part of the market that sells flowers. I half expected to see Chompoo, Peun, Prim, Foon and Art, but it looked like it was early in the morning so maybe they were sleeping off one of their benders at Go's bar.

OK, enough of my stupid jokes. It was filmed in December of 2020. The mask usage seems to be fairly random.

The delivery of meaning 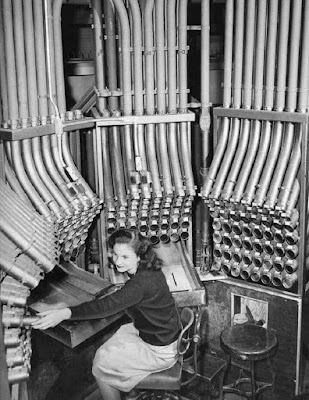 The newest computer can merely compound, at speed, the oldest problem in the relations between human beings, and in the end the communicator will be confronted with the old problem, of what to say and how to say it. - Edward R. Murrow

'It's a beautiful thing, the destruction of words. Of course the great wastage is in the verbs and adjectives, but there are hundreds of nouns that can be got rid of as well. It isn't only the synonyms; there are also the antonyms. After all, what justification is there for a word which is simply the opposite of some other word? A word contains its opposite in itself. Take "good", for instance. If you have a word like "good", what need is there for a word like "bad"? "Ungood" will do just as well -- better, because it's an exact opposite, which the other is not. Or again, if you want a stronger version of "good", what sense is there in having a whole string of vague useless words like "excellent" and "splendid" and all the rest of them? "Plusgood" covers the meaning, or "doubleplusgood" if you want something stronger still. Of course we use those forms already. but in the final version of Newspeak there'll be nothing else. In the end the whole notion of goodness and badness will be covered by only six words -- in reality, only one word. Don't you see the beauty of that, Winston? It was B.B.'s idea originally, of course,' he added as an afterthought.

A sort of vapid eagerness flitted across Winston's face at the mention of Big Brother. Nevertheless Syme immediately detected a certain lack of enthusiasm.

'You haven't a real appreciation of Newspeak, Winston,' he said almost sadly. 'Even when you write it you're still thinking in Oldspeak. I've read some of those pieces that you write in the Times occasionally. They're good enough, but they're translations. In your heart you'd prefer to stick to Oldspeak, with all its vagueness and its useless shades of meaning. You don't grasp the beauty of the destruction of words. Do you know that Newspeak is the only language in the world whose vocabulary gets smaller every year?'

Winston did know that, of course. He smiled, sympathetically he hoped, not trusting himself to speak. Syme bit off another fragment of the dark-coloured bread, chewed it briefly, and went on:

'Don't you see that the whole aim of Newspeak is to narrow the range of thought? In the end we shall make thoughtcrime literally impossible, because there will be no words in which to express it. Every concept that can ever be needed, will be expressed by exactly one word, with its meaning rigidly defined and all its subsidiary meanings rubbed out and forgotten. Already, in the Eleventh Edition, we're not far from that point. But the process will still be continuing long after you and I are dead. Every year fewer and fewer words, and the range of consciousness always a little smaller. Even now, of course, there's no reason or excuse for committing thoughtcrime. It's merely a question of self-discipline, reality-control. But in the end there won't be any need even for that. The Revolution will be complete when the language is perfect. Newspeak is Ingsoc and Ingsoc is Newspeak,' he added with a sort of mystical satisfaction. 'Has it ever occurred to you, Winston, that by the year 2050, at the very latest, not a single human being will be alive who could understand such a conversation as we are having now?'

Posted by ambisinistral at 9:07 AM No comments:

These Boots Are Made For Walking

Get ready for a pedestrian weekend with Limouzina Express.

Posted by ambisinistral at 7:18 AM No comments:

Email ThisBlogThis!Share to TwitterShare to FacebookShare to Pinterest
Labels: Limouzina Express, Music, TGIF, These Boots Are Made For Walking

These images are from the Book of Miracles, a German early Renaissance work that shows various miracles, natural disasters and visions of the apocalypse drawn from Biblical sources and legends. There are more examples after the jump. 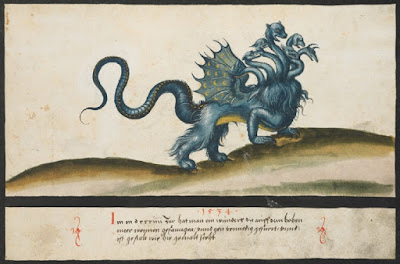 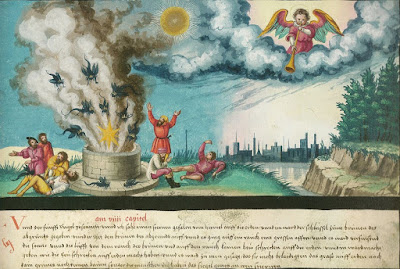 Read more »
Posted by ambisinistral at 9:27 AM No comments:

A while back I did a post on Cossack sword dancing. Today we follow that post up with some Korean sword dancing. Above is a video of young ladies from Chungnam Arts High School doing a sword dance. Their swords are no where near as long and dangerous looking as the Cossack swords, but the costuming and choreography is very nice.

Posted by ambisinistral at 4:03 PM No comments:

Get ready for a match made in heaven weekend with WORLD ORDER and SKE48.

Posted by ambisinistral at 6:45 AM No comments:

The above video explains cold welding, a process in which two surfaces of the same metal can adhere to each other in a vacuum. This of course can cause problems in satellites and other space vehicles. The video offers a nice demonstration of how cold welding occurs and discusses some of the issues it causes in the space programs and their solutions.

Posted by ambisinistral at 8:17 AM No comments:

Walter Molino was a 20th century illustrator and caricaturist. He did the cover art for Italian magazines that featured lurid tales of disaster. His over the top illustrations teasing the stories, most of which actually had happy endings, are quite striking and entertaining. 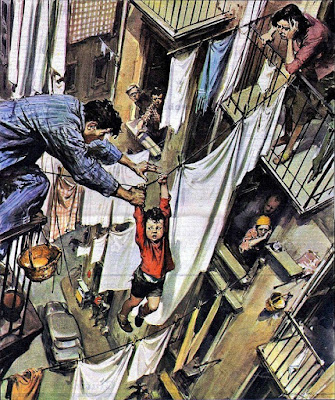 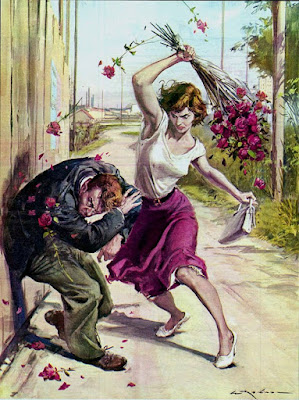 Read more »
Posted by ambisinistral at 7:28 AM No comments:

Get ready for a festive(?) weekend with Night Meeting.

Posted by ambisinistral at 9:40 AM No comments:

These little boats sure packed a lot of fire power. The layout of the interior spaces was of interest to me (at 78 feet it is a little under 3 times as long as my little 30ft sailboat). PT-658 was built by Higgins and commissioned in 1945, so it represents the culmination of PT boat design based on WWII experience.

Posted by ambisinistral at 7:47 AM No comments: