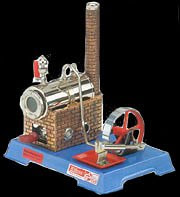 When I was a kid my brother owned a toy steam engine. It was similar to the Wilesco engine pictured to the right. You could connect a belt to its wheel and drive toy pieces of machinery with it. I remember it having a miniature table saw that could cut paper. We chopped up a lot of paper with that thing.

As you can imagine, it vastly entertained a young male's mind. There was an element of danger about it, with its little boiler of scalding water under pressure chugging away and, in our fevered imaginations, always ready to explode at any moment. Thus, we had great respect for the engine's pressure release valve. We fiddled with it endlessly to make sure it wasn't clogged.

However, the point of this post isn't really nostalgia. The other day I ran across a website called Animated Engines. The owner of it has methodically drawn frame by frame diagrams of engines with Autocad, which he then animates (and the speed of his animated gifs can be controlled). He's got 7 types of internal combustion engines, 10 steam engines, and 4 Stirling engines diagrammed. Quite fascinating to see all the approaches to building engines.

It was watching the animations of the steam engines that reminded me of my brother's toy. As much as we played with it, and as much as we fretted over the pressure release valve, watching the animation made me realize I never actually knew how it worked. Turns out the things had some really clever valve mechanisms to spin the drive wheel. The variety of their form is also interesting.

The site is worth spending a bit of time exploring.

Posted by ambisinistral at 10:05 PM 4 comments:

What happens in Avaza stays in Avaza 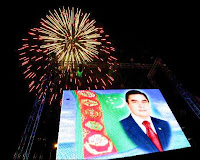 The fireworks, in the picture to the left, are in celebration of the opening of the newest tourist destination on the planet -- Avaza. The 5 billion dollar project bills itself as the next Las Vegas, a must visit destination for the discerning, upscale tourist.

As you plan your next vacation you no doubt wonder, could this be true or is it all hype? Well, the fellow in the picture is President Gurbanguli Berdymukhamedov, successor to the dearly departed Turkmenbashi as the ruler of Turkmenistan.

That fact alone should probably be enough to tip the scales solidly into the hype over truth department.

Yes, this is but the latest monstrous building scheme to be cooked up by the leadership of Turkmenistan. It boast of having luxurious hotels, seaside villas, casinos, an artificial island, a ski center and a children's area. However, during its opening ceremonies the hotels were decorated with huge portraits of President Berdymukhamedov, and there was a giant TV displaying his mug, so I wonder about the ambiance of the place. I know nothing speaks luxury to me quite as much as gigantic propaganda posters. I wonder if it has a copy of the Ruhnama in every night stand?

You can read about it here.

Posted by ambisinistral at 6:24 PM No comments:

While we're obsessing over Michael Jackson...

While we're obsessing over Michael Jackson, according to the blog English Russia, a craze sweeping the Russian blogsphere are Russian Haired Sausages. They're "modding" sausages by sticking hard spaghetti into uncooked sausages and then boiling the whole mess.

They then photograph the result, sometimes decorating them with edible eyeballs and what-not, and post them to their blogs.

The link above includes pictures of some of them, a silly animated gif of a dancing hotdog, and a video instructing you in the culinary art of making Haired Sausages. Myself, I'll take a Hairy Sausage over Michael Jackson blather any day of the week.

Which party does Gov. Ritter belong to? Surely there is no need to ask, it's the invisible party, the party whose name shall not be spoken. Shhh.
Posted by chuck at 1:44 PM 2 comments:

Of course you know, this means war!

To the extent several websites, most notably liberal Alaska blogger Shannyn Moore, are now claiming as “fact” that Governor Palin resigned because she is “under federal investigation” for embezzlement or other criminal wrongdoing, we will be exploring legal options this week to address such defamation. This is to provide notice to Ms. Moore, and those who re-publish the defamation, such as Huffington Post, MSNBC, the New York Times and The Washington Post, that the Palins will not allow them to propagate defamatory material without answering to this in a court of law. The Alaska Constitution protects the right of free speech, while simultaneously holding those “responsible for the abuse of that right.” Alaska Constitution Art. I, Sec. 5. http://ltgov.state.ak.us/constitution.php?section=1. These falsehoods abuse the right to free speech; continuing to publish these falsehoods of criminal activity is reckless, done without any regard for the truth, and is actionable.

Complete notice here. They have a little list, and I hope Sullivan is on it.

Isn’t elegance forgetting what one is wearing? 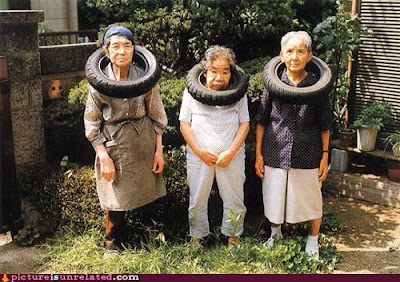 I have no explanation for this picture. Maybe it is an obscure joke, maybe it is photographic evidence of some hideous punishment from Mao's Cultural Revolution. The title of this post is a Yves Saint Laurent quote. Who knows, maybe it is just elderly fashionistas who have finally gone 'round the bend.

I have no idea. Any guesses?

Posted by ambisinistral at 7:55 PM 3 comments: