One interesting detail -- the air needs to be well circulated or, in the weightlessness, a bubble of exhaled carbon dioxide will form around their heads as they sleep.

Posted by ambisinistral at 6:54 AM No comments:

Sleeping on the Moon

Amy Shira Teitel of Vintage space has an article, Astronauts
Didn’t Sleep So Well on the Moon, on the discover website. The above video is a companion to that article. All of the early capsules -- from the Mercury program through Apollo -- were remarkably small and cramped. It always struck me they must have been agony to sit in for days on end, but it never crossed my mind how miserable the sleeping conditions were as well.

Below is an excerpt from her article. Be sure to follow the above link and read it all.


History’s first lunar sleep period came after Neil Armstrong and Buzz Aldrin walked on the Moon; the original plan called for a sleep period before going outside but excitement prevailed and the EVA was moved up. Once back inside, Armstrong and Aldrin tried to make themselves as comfortable as possible without any beds. As per an early schematic of rest positions, Armstrong lay on the ascent engine cover with his legs in a makeshift sling, his boots under the DSKY, and his head on a flat shelf. Aldrin curled up in a semi-fetal position on the floor — neither could properly stretch out in the tiny spacecraft.

Exacerbating the already uncomfortable setup was their bulky spacesuits; this was NASA’s attempt to keep any dust they tracked back inside after the EVA from behind inhaled. Mission planners also hoped that the buttoned up suits would cut out some of the ambient noise, but it didn’t. All night the glycol water pump whirred. The suits got uncomfortably cold even with the cooling system disconnected. And it was uncomfortably bright. A fair bit of sunlight bled in past the windows shares, and the display lights and illuminated switches only added to the brightness. The crew eventually took off their helmets but nothing really helped. Sleeping in the LM became a battle to find what Armstrong called in the post-flight debriefing “a minimum level of sleeping conditions,” and it was a battle they lost. “The rest period was almost a complete loss,” he said.

Posted by ambisinistral at 7:08 AM No comments: 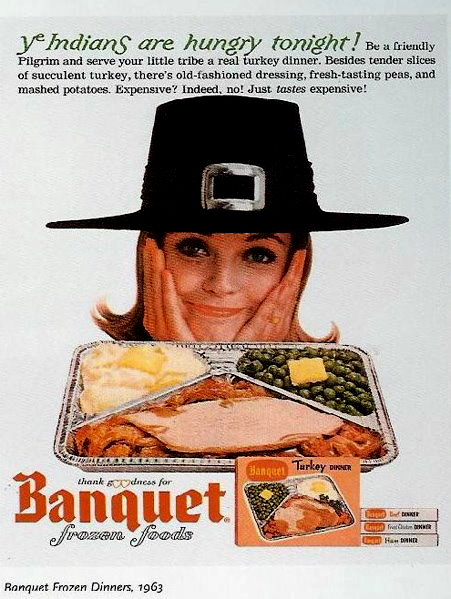 Yum, yum, yum! Have a good one, but don't stuff yourselves too much.

I cannot shake off the sparks that fall on my hands

Posted by ambisinistral at 8:48 AM No comments:

Attitude adjuster for our elites 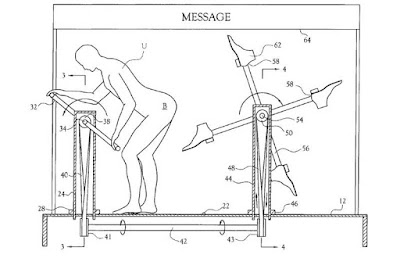 Reading the headlines lately, I can think of several people that would serve our needs best by retiring from public life and spending several hours a day exercising one of these machines. If nothing else, it sure would beat listening to their insincere apologies.

Posted by ambisinistral at 9:43 AM No comments:

Get ready for a different perspective on things this weekend with Katja Ebstein.

The artist Lydia Ricci makes amazing little sculptures of everyday objects from scraps and bits of trash she's collected. You can see more of her sculptures after the jump, and at her website From Scraps. 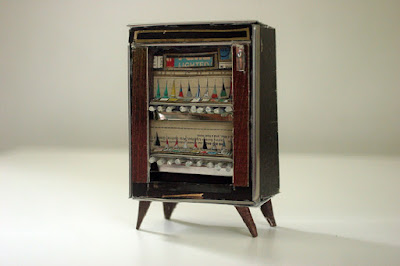 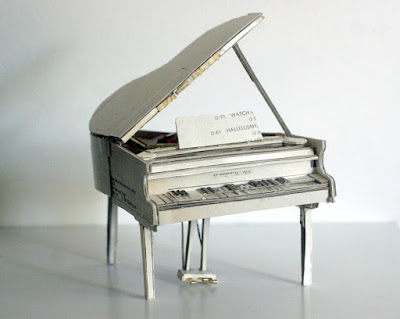 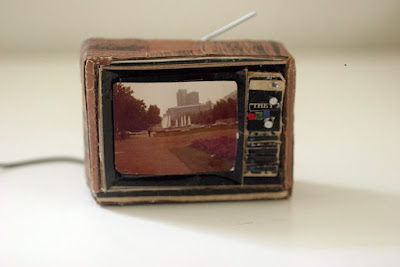 Read more »
Posted by ambisinistral at 10:00 AM No comments:

Making a bow, arrows and a quiver the old school way

A fellow makes a bow, arrows and a quiver using nothing but a stone axe and a stone chisel. He has much more at his website Primitive Technology.


Posted by ambisinistral at 9:12 AM No comments:

Email ThisBlogThis!Share to TwitterShare to FacebookShare to Pinterest
Labels: Technology

I was looking for pictures for another topic when I ran across the one posted above. I could not pass on using it, so I'll post it in isolation. All I've got to say is the outfits those two young lads are wearing are a sight to behold, and they're rendered all the more ridiculous by how conventionally everybody else is dressed.

Posted by ambisinistral at 2:43 PM No comments:

Art of the Russo-Japanese War

The imperial ambitions, in Manchuria and Korea, of both Russia and Japan led to the first modern war between western and Asian militaries forces. It was a bloody war that is largely forgotten today.

Sitting in the interval between the American Civil War and WWI, its battles, on both the land and at sea, featured armies and navies struggling to integrate modern firepower into their tactics and strategies. Russia further suffered from having to fight the war at an enormous distance from its heartland. In the end Russia lost the war to a presumed inferior Asiatic opponent and the path towards WWII's Pacific battles was set.

The artwork from the war is interesting in that it features both European and Japanese styles. The contrast between the two artistic heritages is striking. There are more examples after the jump. 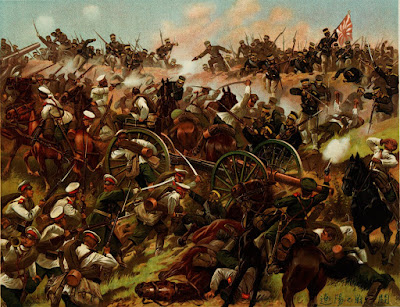 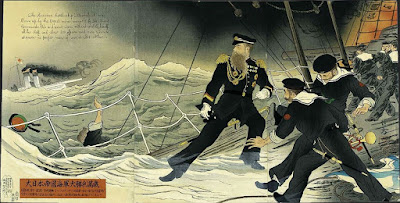 Read more »
Posted by ambisinistral at 10:25 AM No comments:

Get ready for an overwrought weekend with iL Divo's Italian version of Knights in White Satin.


Posted by ambisinistral at 9:47 AM No comments:

Walking a street in Addis Abba

Another in my series of videos of people just walking down streets in cities. In spite of the relative poverty of the Ethiopian capital, the contrast with the scenes in my last street walk -- Buying street food in Pyongyang, North Korea -- is striking. The north Korean capital, even in a scene that was likely staged, seems very empty and bleak in comparison.

Prior to the rise of motels 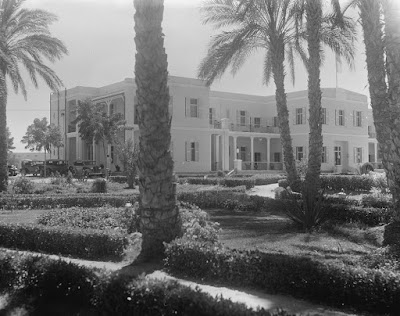 Back in the day, before the era of the automobile, hotels and inns were the main accommodations for travelers. Here, and after the jump, are just a few of those old hotels.

And, as long as we're talking about inns, below is Chapter 16 of Don Quixote, which details his adventures in an inn he imagines to be a castle.


The innkeeper, seeing Don Quixote slung across the ass, asked Sancho what was amiss with him. Sancho answered that it was nothing, only that he had fallen down from a rock and had his ribs a little bruised. The innkeeper had a wife whose disposition was not such as those of her calling commonly have, for she was by nature kind-hearted and felt for the sufferings of her neighbours, so she at once set about tending Don Quixote, and made her young daughter, a very comely girl, help her in taking care of her guest. There was besides in the inn, as servant, an Asturian lass with a broad face, flat poll, and snub nose, blind of one eye and not very sound in the other. The elegance of her shape, to be sure, made up for all her defects; she did not measure seven palms from head to foot, and her shoulders, which overweighted her somewhat, made her contemplate the ground more than she liked. This graceful lass, then, helped the young girl, and the two made up a very bad bed for Don Quixote in a garret that showed evident signs of having formerly served for many years as a straw-loft, in which there was also quartered a carrier whose bed was placed a little beyond our Don Quixote's, and, though only made of the pack-saddles and cloths of his mules, had much the advantage of it, as Don Quixote's consisted simply of four rough boards on two not very even trestles, a mattress, that for thinness might have passed for a quilt, full of pellets which, were they not seen through the rents to be wool, would to the touch have seemed pebbles in hardness, two sheets made of buckler leather, and a coverlet the threads of which anyone that chose might have counted without missing one in the reckoning.

On this accursed bed Don Quixote stretched himself, and the hostess and her daughter soon covered him with plasters from top to toe, while Maritornes- for that was the name of the Asturian- held the light for them, and while plastering him, the hostess, observing how full of wheals Don Quixote was in some places, remarked that this had more the look of blows than of a fall.

It was not blows, Sancho said, but that the rock had many points and projections, and that each of them had left its mark. "Pray, senora," he added, "manage to save some tow, as there will be no want of some one to use it, for my loins too are rather sore."

"Then you must have fallen too," said the hostess.

"I did not fall," said Sancho Panza, "but from the shock I got at seeing my master fall, my body aches so that I feel as if I had had a thousand thwacks."
(continues after the jump) 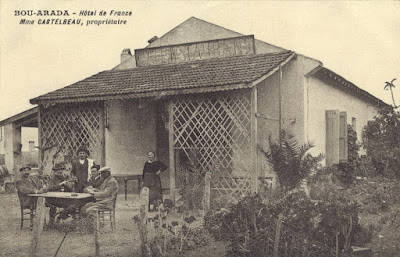 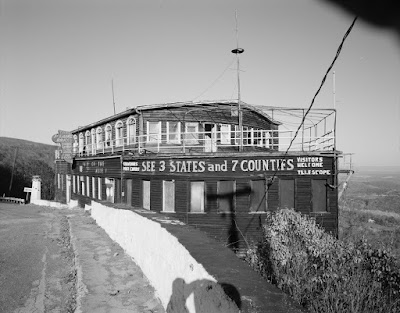 Read more »
Posted by ambisinistral at 10:27 AM No comments:

Get ready for a felonious weekend with Postmodern Jukebox featuring Robyn Adele Anderson.

Pour yourself a glass of wine


Posted by ambisinistral at 4:21 PM 3 comments: