Cooking in a rural village

This is a video taken in what I assume -- although I am just guessing here -- is an extended family compound in a village in Bangladesh. The camera man, along with focusing on the cooking, spends a lot of time filming a long brick building subdivided into separate rooms. There are piles of bricks about, so I suppose this is fairly new.

The video is connected to Limax Trade and Services, a company that makes jute stick charcoal which is used in the manufacture of fireworks. I suppose the people in the video are small business owners in their community. I hope they are having luck in their business dealings.

Posted by ambisinistral at 11:22 AM No comments:

The apple draws the Earth

The apple tree that dropped the apple that so enlightened Isaac Newton is still alive. That's it above. As entertaining as the common version of the story is, the apple didn't actually bounce off his head. As he recounted to his biographer William Stukeley:

After dinner, the weather being warm, we went into the garden and drank the, under the shade of some apple trees ... he told me, "he was just in the same situation, as when formerly, the notion of gravitation came into his mind. It was occasion'd by the fall of an apple, as he sat in contemplative mood. Why should that apple always descend perpendicularly to the ground, thought he to himself ... Why should it not go sideways, or upwards, but constantly to the Earth's centre? Assuredly, the reason is, that the Earth draws it. There must be a drawing power in matter. If matter thus draws matter, it must be in proportion of its quantity. Therefore the apple draws the Earth, as well as the Earth draws the apple."

Posted by ambisinistral at 2:02 PM No comments:


Get ready for a heart broken weekend with Carlos Santana and Mana.

Posted by ambisinistral at 8:25 AM No comments:

When my brother, wife and myself watched the movie Dunkirk one thing that amused us was the owner of the civilian boat went to sea wearing a tie. Obviously our sartorial choices when we go sailing are lacking.

These are 1942 men's clothing ads from the New York Public Library Digital Collection. In studying them it is clear that I am still an oaf when it comes to dressing like a proper Gentleman. I must try to remember to smoke a pipe and dress in a suit next time I go golfing.

There are more examples after the jump, and of course even more at the above link. 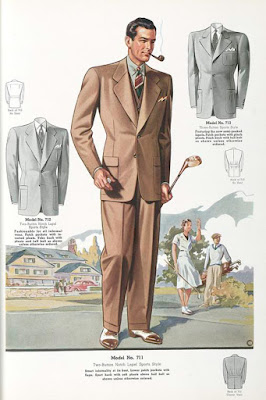 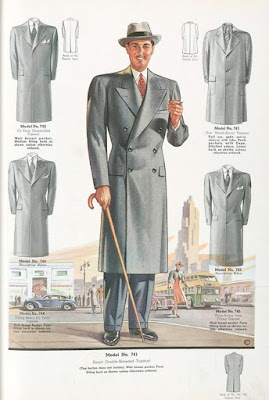 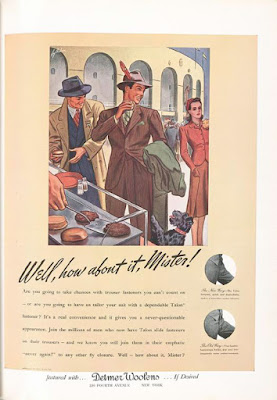 Read more »
Posted by ambisinistral at 12:06 PM No comments:


Get ready for a Gooberment Shutdown weekend with Semisonic.

Posted by ambisinistral at 8:10 AM No comments:

These are covers from a magazine called Travel. It was published in the early part of the 20th century. The covers are quite striking. They are uncluttered, have fairly simple graphics and feature an extremely vibrant color palette.

More can be seen after the jump, and more at Magazine Art, a favorite site of mine, where I found these samples. Enjoy. 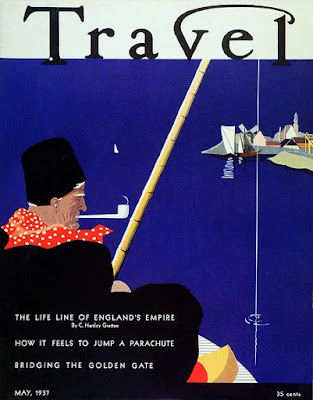 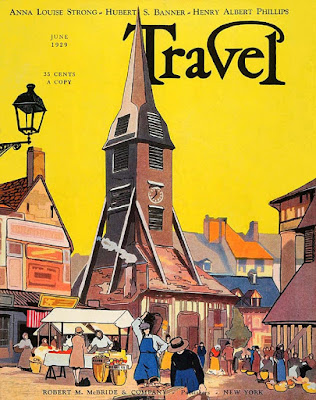 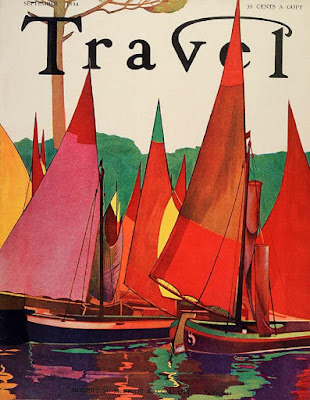 Read more »
Posted by ambisinistral at 4:11 PM No comments:

Time to go walking again. Considering the 'shit-hole- kerfuffle I almost used a Haitian location, but making some sort of a statement would not be in keeping with the reason I post these videos. I post them because they show a slice of a neighborhood. That neighborhood may be exotic to us, but to the people living there it is a familiar corner of their universe. It is a place they know like the back of their hand.

Above is a couple of young girls in Ulan Bator, Mongolia, taking us on a tour of their daily walk from their home to a school. It is full of shortcuts, advice and silliness. Enjoy.


Posted by ambisinistral at 8:20 AM No comments:

The First Time Ever I Saw Your Face

Get ready for a love struck weekend with Johnny Cash's version of the well known song.

Posted by ambisinistral at 8:09 AM No comments:

Email ThisBlogThis!Share to TwitterShare to FacebookShare to Pinterest
Labels: Johnny Cash, Music, TGIF, The First Time Ever I Saw Your Face

Much of our image of the ancient world comes through stone. This is of course a distorted view, with much of the transient materials and colors of the historical world lost to us. However, along with paintings and mosaics, there are also some old fabrics left to us that give a brief glimpse to another aspect of the lost world of antiquity. The fabrics shown in this post are from Europe, India and the Americas.

These images, and the ones after the jump, are all from the following articles at The History Blog (http://www.thehistoryblog.com/). By the way, that is an excellent site and it is well worth a visit and time spent viewing their archives. 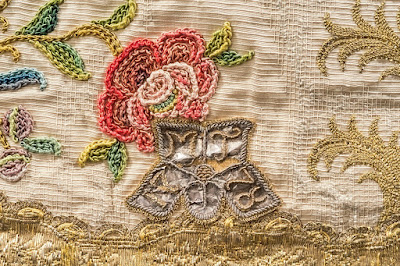 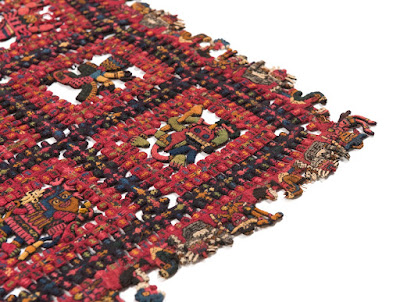 Read more »
Posted by ambisinistral at 8:49 AM No comments:

OVER the western sea, hither from Niphon come,
Courteous, the swart-cheek’d two-sworded envoys,
Leaning back in their open barouches, bare-headed, impassive,
Ride to-day through Manhattan.

Libertad!
I do not know whether others behold what I behold,
In the procession, along with the nobles of Asia, the errand-bearers,
Bringing up the rear, hovering above, around, or in the ranks marching;
But I will sing you a song of what I behold, Libertad.

When million-footed Manhattan, unpent, descends to her pavements;
When the thunder-cracking guns arouse me with the proud roar I love;
When the round-mouth’d guns, out of the smoke and smell I love, spit their salutes;
When the fire-flashing guns have fully alerted me—when heaven-clouds canopy my city with a delicate thin haze;
When, gorgeous, the countless straight stems, the forests at the wharves, thicken with colors;
When every ship, richly drest, carries her flag at the peak;
When pennants trail, and street-festoons hang from the windows;
When Broadway is entirely given up to foot-passengers and foot-standers—when the mass is densest;
When the façades of the houses are alive with people—when eyes gaze, riveted, tens of thousands at a time;
When the guests from the islands advance—when the pageant moves forward, visible;
When the summons is made—when the answer that waited thousands of years, answers;
I too, arising, answering, descend to the pavements, merge with the crowd, and gaze with them.
Superb-faced Manhattan!
Comrade Americanos!—to us, then, at last, the Orient comes.

To us, my city,
Where our tall-topt marble and iron beauties range on opposite sides—to walk in the space between,
To-day our Antipodes comes.

The Originatress comes,
The nest of languages, the bequeather of poems, the race of eld,
Florid with blood, pensive, rapt with musings, hot with passion,
Sultry with perfume, with ample and flowing garments,
With sunburnt visage, with intense soul and glittering eyes,
The race of Brahma comes!
See, my cantabile! these, and more, are flashing to us from the procession;
As it moves, changing, a kaleidoscope divine it moves, changing, before us.

For not the envoys, nor the tann’d Japanee from his island only;
Lithe and silent, the Hindoo appears—the Asiatic continent itself appears—the Past, the dead,
The murky night morning of wonder and fable, inscrutable,
The envelop’d mysteries, the old and unknown hive-bees,
The North—the sweltering South—eastern Assyria—the Hebrews—the Ancient of Ancients,
Vast desolated cities—the gliding Present—all of these, and more, are in the pageant-procession.

Geography, the world, is in it;
The Great Sea, the brood of islands, Polynesia, the coast beyond;
The coast you, henceforth, are facing—you Libertad! from your Western golden shores
The countries there, with their populations—the millions en-masse, are curiously here;
The swarming market places—the temples, with idols ranged along the sides, or at the end—bonze, brahmin, and lama;
The mandarin, farmer, merchant, mechanic, and fisherman;
The singing-girl and the dancing-girl—the ecstatic person—the secluded Emperors,
Confucius himself—the great poets and heroes—the warriors, the castes, all,
Trooping up, crowding from all directions—from the Altay mountains,
From Thibet—from the four winding and far-flowing rivers of China,
From the Southern peninsulas, and the demi-continental islands—from Malaysia;
These, and whatever belongs to them, palpable, show forth to me, and are seiz’d by me,
And I am seiz’d by them, and friendlily held by them,
Till, as here, them all I chant, Libertad! for themselves and for you.

For I too, raising my voice, join the ranks of this pageant;
I am the chanter—I chant aloud over the pageant;
I chant the world on my Western Sea;
I chant, copious, the islands beyond, thick as stars in the sky;
I chant the new empire, grander than any before—As in a vision it comes to me;
I chant America, the Mistress—I chant a greater supremacy;
I chant, projected, a thousand blooming cities yet, in time, on those groups of sea-islands;
I chant my sail-ships and steam-ships threading the archipelagoes;
I chant my stars and stripes fluttering in the wind;
I chant commerce opening, the sleep of ages having done its work—races, reborn, refresh’d;
Lives, works, resumed—The object I know not—but the old, the Asiatic, renew’d, as it must be,
Commencing from this day, surrounded by the world.

And you, Libertad of the world!
You shall sit in the middle, well-pois’d, thousands of years;
As to-day, from one side, the nobles of Asia come to you;
As to-morrow, from the other side, the Queen of England sends her eldest son to you.
The sign is reversing, the orb is enclosed,
The ring is circled, the journey is done;
The box-lid is but perceptibly open’d—nevertheless the perfume pours copiously out of the whole box.

Young Libertad!
With the venerable Asia, the all-mother,
Be considerate with her, now and ever, hot Libertad—for you are all;
Bend your proud neck to the long-off mother, now sending messages over the archipelagoes to you;
Bend your proud neck low for once, young Libertad.
Were the children straying westward so long? so wide the tramping?
Were the precedent dim ages debouching westward from Paradise so long?
Were the centuries steadily footing it that way, all the while unknown, for you, for reasons?
They are justified—they are accomplish’d—they shall now be turn’d the other way also, to travel toward you thence;
They shall now also march obediently eastward, for your sake, Libertad.


Posted by ambisinistral at 11:20 AM No comments:

Get ready for a smooth weekend with a Lemon's slow jamzz of the Tracy Chapman classic.

Posted by ambisinistral at 11:00 AM No comments: 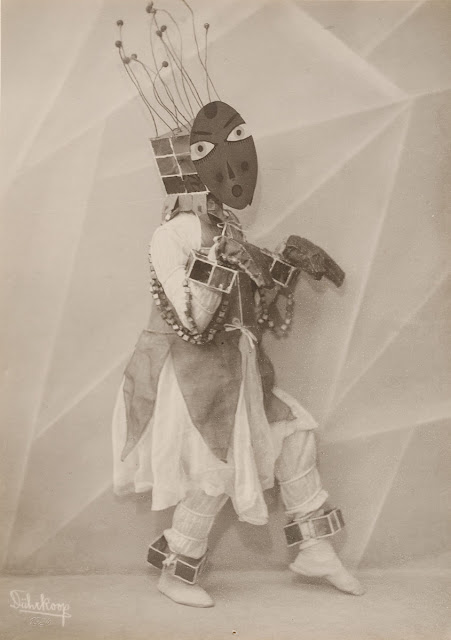 Sooner or later even things that are modern and daring look quaint. These costumes were made by the German expressionistic artist and dancer Lavina Schulz in the 1920s. They are via La boite verta.

I did like the detail that she and her husband lived without furniture, but lived in their dance tights so they could choreograph dances and design costumes. Sadly, although perhaps predictably, she came to a sorry end, shooting her husband and then herself as financial ruin closed in on her.

The photographs were taken by Minya Diez-Dührkoop, another German artsy-fartsy type who travelled in the same circles as Lavina. 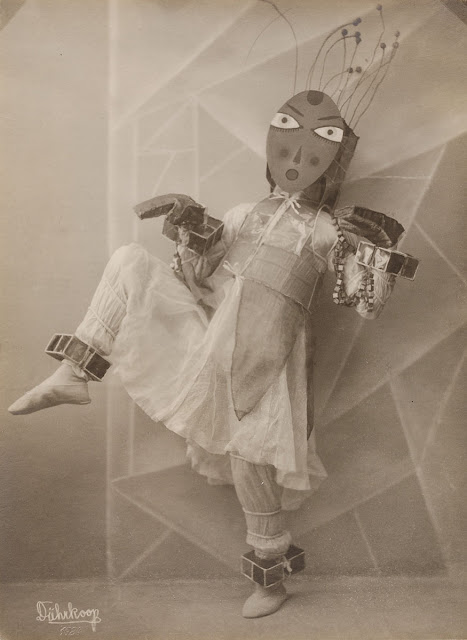 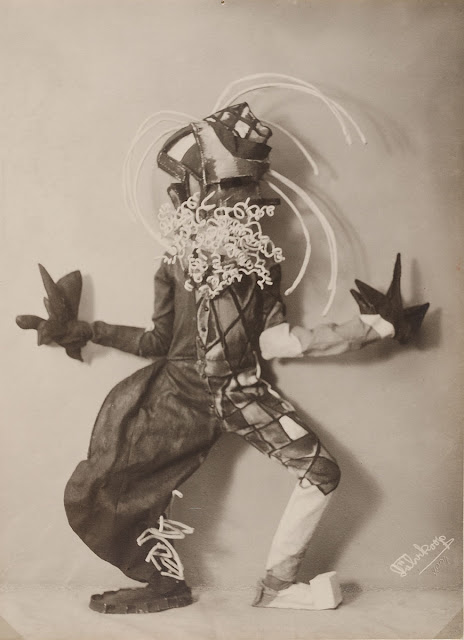 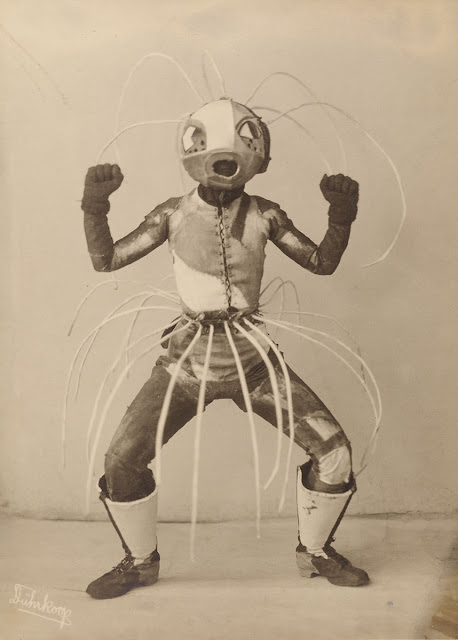 This is a video made by the artist Bartholomäus Traubeck. He's cut a disk from a tree trunk and mounted it to a turntable where, as it spins like an old record album, it is optically scanned. The signal from the scan is then analyzed, manipulated and output to an electronic piano.

The highly processed output is billed as the music of trees. Well, if you say so...


Posted by ambisinistral at 2:24 PM No comments: