"While we do not have enough bread, the peasants should give a natural tax in the form of bread to the Soviet economy for fear of a merciless massacre." Leon Trotsky

The Holodomor (literal translation Death by hunger) was a man-made famine in the Ukrainian SSR, part of the Soviet famine of 1932–1933. During the famine, which is also known as the "terror-famine in Ukraine" and "famine-genocide in Ukraine", millions of Ukrainians died of starvation in a peacetime catastrophe unprecedented in the history of Ukraine.

It is not often mentioned in the news of the Russian invasion, but memories of it almost certainly animates the resistance the Ukrainians are putting up to the attack. These are a few pieces of Ukrainian artwork remembering the Holodomor. 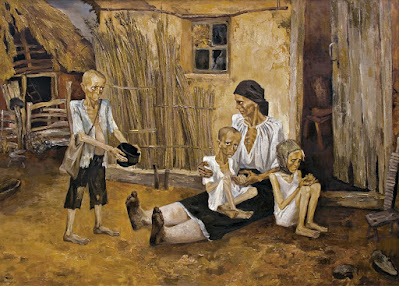 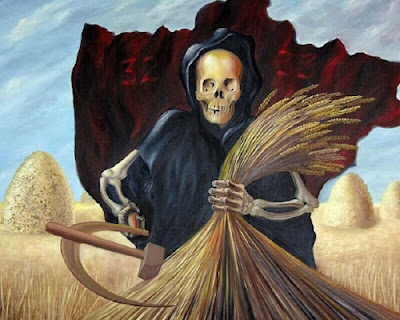 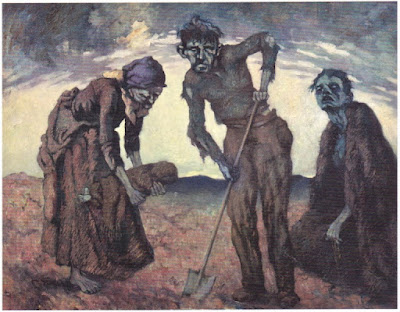 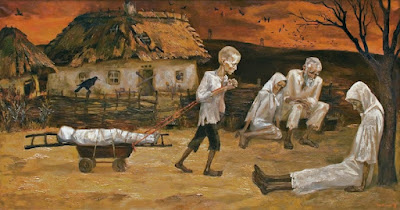 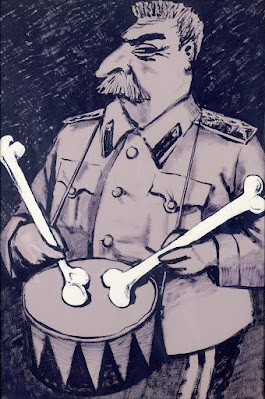 Posted by ambisinistral at 9:58 AM No comments:

Get ready for a parting weekend with The Horse Puppets.

Posted by ambisinistral at 6:25 AM No comments:

One of the great engineering achievements of the 19th Century was the laying of the tans-Atlantic telegraph cable which greatly reduced the time needed to communicate between the old world and the new. The first attempt was laid between 1854 and 1858 but failed after only three weeks. In the the late 1860s a second attempt was made and two cables were put into service.

These cables were laid by the SS Great Eastern. Abord that ship was the artist Robert Charles Dudley who painted a series of watercolors chronicling the effort. There are more images after the jump. 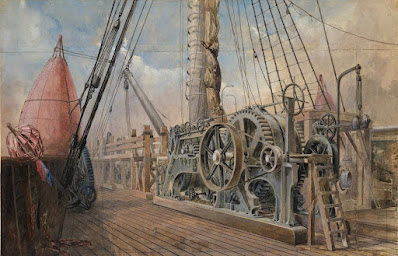 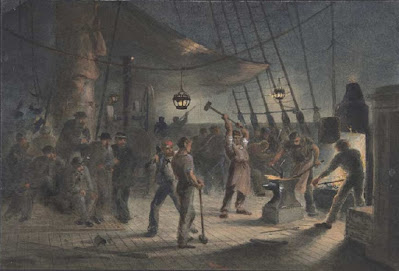 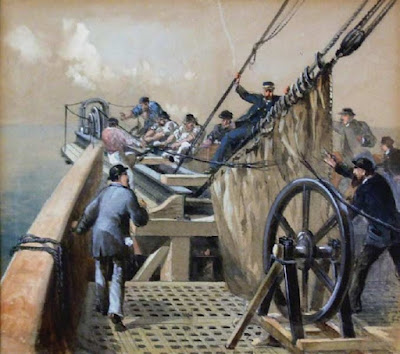 Read more »
Posted by ambisinistral at 9:05 AM No comments: It used to be Washington's Birthday, but then it morphed into the amorphic President's Day. So, now we honor all Presidents, even the likes of the hapless James Buchanan (modern time isn't the only era of Presidential dunces) who said, regarding the slavery issue, that it was "happily, a matter of but little practical importance".

Feh, it's nothing but a holiday for government workers these days. I won't be popping any champaign corks to toast Buchanan and his like. Washington was a fine fellow though.

Posted by ambisinistral at 6:25 AM No comments:

A fish market on Lake Victoria

This is the Ggabba Landing fish market in Kampala, Uganda on the shores of Lake Victoria. The videographer orders a fish fried over an open fire with sides of fries and salad. It is all very tasty looking. Later in the video he talks discusses the economics of running the stall with the vendor. The accent can be a bit thick, so you might want to turn on the captioning.

Posted by ambisinistral at 12:32 PM No comments:

Get ready for a placid weekend with Song Hee Jin featuring Lee Yo Han.

Posted by ambisinistral at 7:02 AM No comments:

It's always the quiet ones

I have visitors and I am also going to travel a bit. My already erratic posting may get even more erratic for a week or two.

As for the picture, I like to imagine the mermaid affixed the boot to his hook to protect her fish buddies. Then again, maybe mermaids eat fish, so she was just saving her dinner. It's hard to say who's the villain of this piece.

Posted by ambisinistral at 8:23 AM No comments:

Get ready for a stranded weekend with Jeffrey Foucault.

Eating dogs for fun and fame

A first-person view of a hotdog eating contest. It's unpleasant looking, but who am I to judge another's hobby? I was amused at the end when he kept saying, "it hurts, it hurts".

Posted by ambisinistral at 7:01 AM No comments:

In the olden days, since comets were such a visible anomaly in the sky of fixed stars, comets were taken as omens of momentous happenings. Eventually, as their nature began to be better understood, they became an object of scientific curiosity and study. They have been featured in art in both their guises. There are more images after the jump. 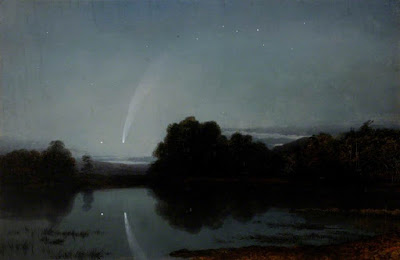 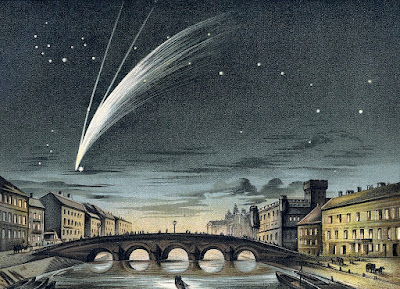 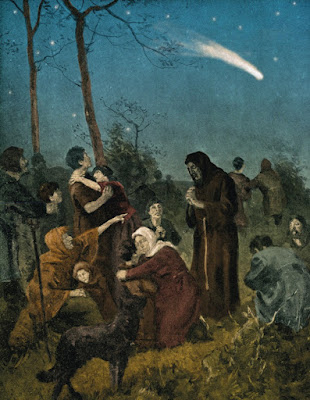 Read more »
Posted by ambisinistral at 11:51 AM No comments:

There is an ongoing cultural genocide against the Uyghurs of western China. Less reported, there are also attempts to stamp-out Mongolian culture in north-eastern China. Add to that the annexation of Tibet and Hong Kong, the attempts to seize the South China Sea as well as the persecution of religious minorities and the endless belligerence aimed at the country of Taiwan.

These boardrooms have placed profits over conscience. In whatever way you can, you don't have to do the same. One easy, albeit only a small step, is not to watch a minute of the Olympics. Let those advertising dollars go to waste.

Posted by ambisinistral at 3:15 PM No comments:

Eye of the Tiger

Get ready for a surmounting weekend with Walk off the Earth.

Posted by ambisinistral at 6:28 AM No comments:

Email ThisBlogThis!Share to TwitterShare to FacebookShare to Pinterest
Labels: Eye of the Tiger, Music, TGIF, Walk off the Earth

These clips are from the Artger YouTube channel. The site primarily focuses on Mongolian cooking and cuisine. The first clip, in honor of the opera singers in Penthouse: War in Life, features a real Mongolian opera singer who shares a meal with Nargie, the host of the video. They order meat and vegetables from a shop in the city which gets delivered to them, and then they cook it over an open fire. Their jovial conversation is either in English or subtitled. It is a cold day with winter approaching.

The next video is another delivery, this time to a fellow lazing next to a river. He gets the equipment and ingredients for a hot pot. In a hot pot soup is heated and you add whatever you want to stew in it. In a restaurant the soup will be at the table, and you go to a buffet to pick the ingredients you want.

Finally, we have hamburgers and hot dogs. The meat is just shredded beef, and whether it is a hamburger or a hot dog depends on the type of bun you put it on. Still, the sandwiches are tasty looking.

Posted by ambisinistral at 9:51 AM No comments: