One community organizer to another... 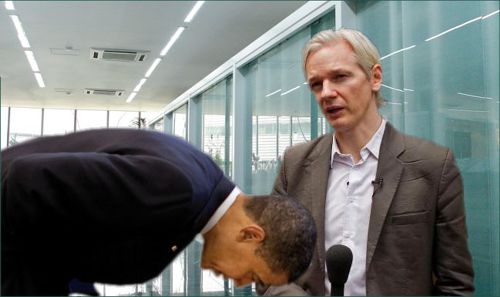 Except for the amount it embarrasses his bumbling administration, I can't imagine Obama really being all that upset by the antics of Julian Assange.  'Course he'll have to throw him under the bus, but it seems to me like the sort of a stunt a community organizer would admire.


"It is safe to say that the president was, as an understatement, not pleased this information becoming public,"' Gibbs said. "As you saw during the presidential campaign and as during his time in the White House, open and transparent government is something that the president believes is truly important."

"But the stealing of classified information and its dissemination is a crime."

Oh brother, I wonder how he managed to keep a straight face as he gas-bagged on about the transparency of the Obama administration? If nothing else, at least they seem vaguely aware that espionage is a crime.
Posted by ambisinistral at 9:10 PM No comments:

While looking for material for a Thanksgiving Day post I got sidetracked when I stumbled upon the Australian Brush Turkey. An interesting thing about them is they can walk up walls, particularly when they are chicks, even if the wall is inclined at a greater than 90 degree angle. Above is a video showing them in action.

They're not actually turkeys, they're some sort of mound building bird and they can be quite a bit of pest in suburban areas.  The Australian ABC News has an article Man v bird: the brush turkey battle that discusses the problem. From the article:


Professor Jones says once a pesky male brush turkey has decided his mound, his nest which he uses to attract females, is going in your backyard, it's all downhill from there.

"It's just about impossible to get rid of the guy," he said.

"He has decided that's where he's going to put his precious mound, which is the most important thing in his world, and nothing will dissuade him.

"It happens all the time. People say 'I'm sick to death of that bloody bird', so they spend back-breaking hours spreading it all back out again.

"Next morning they wake from their exhausted sleep to find it all back in place.

"It's like the turkey is saying 'look I've made a big decision about where my mound is going and look buddy this is it, I'm staying'."

I have a suggestion for Professor Jones -- declare a national holiday, chop their heads off, jam stuffing into their carcasses and stick them in a pre-heated oven for a few hours. That should thin their flocks some.

Anyway, Happy Thanksgiving all. Enjoy your family, the meal, pumpkin pie and football on TV.
Posted by ambisinistral at 2:47 AM 1 comment:

Important successes will be accomplished 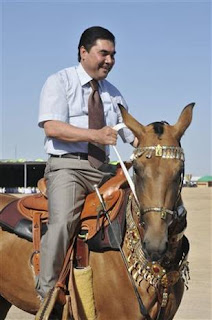 For those that don't know, Turkmenistan is a county rich in natural gas and lunatic leaders. The combination has led to some strange and expensive construction ventures, such as gargantuan spinning statues and the Las Vegas of Central Asia among others.

I confess to having been been remiss in keeping folks abreast of the latest news of grandiose and completely crazy engineering projects moving forward in Turkmenistan.

For example, I never posted about the opening ceremony for the Golden Age Lake that happened last year. This is a scheme left over from the Turkmenbashi (may he rest in peace). This project involves digging hundreds of miles of canals to channel water to the Karashor Depression.

The purpose of all this is to create a 750 square mile lake in the middle of the desert. I'm not sure, but it may have something to do with the late Turkmenbashia's rather odd notion to start cultivating rice in the deserts of Turkmenistan.

Meanwhile his successor, Gurbanguli Berdymukhamedov, is apparently quite the sports enthusiast. That's him on the horse. He's come up with the idea to blow gobs of money building a gigantic sports complex in Turkmanistan.

The suspicion is that he is building it so he can bid on hosting the Olympics. This in spite of the fact that Turkmenistan has never won an Olympic medal. My favorite bit from the article:


Since coming to power, Berdymukhamedov has earnestly cast himself as a man of action, striking a stark contrast with his epicurean predecessor, President Saparmurat Niyazov (ed - a.k.a. the Turkmenbashi), who died of heart failure in late 2006 at the age of 66.

Niyazov did sporadically attempt to instill his subjects with an understanding of the benefits of exercise. His most eye-catching practice was to lead his ministers and government workers on an annual 8-kilometer trek up the Walk of Health, a concrete staircase built into the hills overlooking the capital, Ashgabat.

But while officials trudged up the hill, rotund Niyazov reputedly took a helicopter ride to the summit, thereby undermining the entire purpose of the exercise.

Posted by ambisinistral at 9:43 PM 2 comments:

While my contributions are nearly insignificant I do try to contribute some small amount of money to be used for the benefit of our troops and veterans. For the past few years I've done that through Wounded Warriors Project and Soldiers' Angels.

Unfortunately these charities are not highly rated by Military Money Matters Veterans Charities Ratings - both received a "D" grade. Charity Navigator rates Wounded Warriors Project at only 48.66 (presumably out of 100) - apparently because nearly 86% of their fundraising is consumed in costs. They rate Soldiers' Angels at 50.85.

Are any of our readers familiar with these charities enough to either defend or condemn them? Do you have any service member and/or veterans charities you KNOW to be top notch?
Posted by Knucklehead at 3:44 PM 3 comments:

And you thought red light cameras were bad... 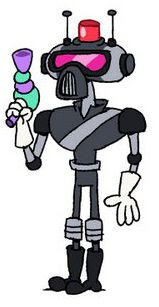 
The aim of ASSET is to contribute substantially to the improvement of safety in the field of sustainable road transportation.

Improving driver support, awareness and behaviour is a key issue.

This will be achieved through an advanced sensor/processing network providing assistance and information for drivers, traffic control agencies and infrastructure operators.

Wondering what the heck gibberish like "sustainable road transportation" is about you may delve further into the website for more information. If so, you will discover that it is "a practical holistic approach generating an overall safety theory to manage the complex interactions" which involves "a competent team of experienced and multidisciplinary experts (Kybernetikwerkstatt)" which examine "chains of interdependencies and processes will be analysed to identify critical parameters influencing road safety".


Each of the £50,000 (about $80,000) cameras can naturally tell just how fast you're going and, if you're speeding, take a picture of you and your license plate number. That's just the beginning. It can also look up the status of your insurance, tell if you're wearing a seatbelt, and ding you for tailgating, all while sitting alone on the side of the road, relying on a wireless data connection and an internal generator to be totally self-sufficient.


Speeding? Seatbelts? Tailgating? So, all the happy talk at the Project ASSET website is just a smoke screen for yet another means of city hall, under the guise of "sustainable road transportation" and other such claptrap, to vacuum money out of your wallet via traffic fines.

Posted by ambisinistral at 9:45 PM 2 comments:

I've recently began following a blog called Borderland Beat. It is covering the escalating violence in northern Mexico. It is depressing reading (and be forewarned if you follow the link -- it sometimes has rather graphic pictures).


Today the Zetas (one of the criminal cartels fighting to control the drug trade) and the Mexican federal police backed by soldiers engaged in a large scale gun battle. So far 47 people have been reported killed, including Tony Tormento who was one of the cartel's leaders. The astonishing video above is gives a feel for the volume of gunfire. I don't speak Spanish so I don't know what the camera men and the people on the streets are saying to each other. Brave man, the fellow who filmed that.


Most sobering to a U.S. citizen is that Matamoros is just across the border from Brownsville Texas and the gunfight was so intense that the University of Texas at Brownsville and Southernmost Texas College had to cancel or move some events. With violence increasing in northern Mexico it seems only a matter of time before a serious and deadly border incident happens.


Posted by ambisinistral at 7:13 PM 5 comments:

Sorry suckers, but the race goes to the swift 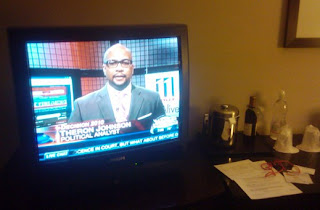 I'm in Atlanta this week. To the left is the TV news I can watch here. The local coverage is about Georgia races I know little about. It doesn't matter, I voted in Florida last week before I took my trip.

As for my vote, after observing Al Gore's life style I decided that if I aligned my self as a member of the Elite Class I could, with a clear conscience, have a huge house filled with many flat screened TVs, incandescent light bulbs, SUVs parked in the drive and what-not,  so I voted a straight Green ticket.

'Course, there's a rather different fate in store for you. I'll now be exhorting you to live in a hovel, eat nothing but locally grown gruel, and in general keep your carbon footprint as small as possible. Sorry for tossing you all under the bus, but -- what can I say -- a weasels gotta do what a weasels gotta do.  Go Green and Hoo-rah!!!

Anyways, here's to a happy election day and bear in mind, whatever else may happen, at least we won't have to watch any of those damn campaign commercials for a while. 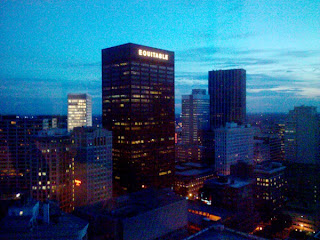 Posted by ambisinistral at 11:01 PM 2 comments: