She Drives Me Crazy

Get ready for a berserk weekend with Emancquea.

Posted by ambisinistral at 8:31 AM No comments:

Email ThisBlogThis!Share to TwitterShare to FacebookShare to Pinterest
Labels: Emancquea, Music, She Drives Me Crazy, TGIF

From a blurb about the book In Her Kitchen: Stories and Recipes from Grandmas Around the World:


"On the eve of a photography trip around the world, Gabriele Galimberti sat down to dinner with his grandmother Marisa. As she had done so many times before, she prepared his favorite ravioli. The care with which she prepared this meal, and the pride she took in her dish, led Gabriele to seek out grandmothers and their signature dishes in the sixty countries he visited."

These are pictures of a few of the grandmas he visited and their dishes. There are more after the jump, and more at Amusing Planet's What Grandmas Around The World Cook. 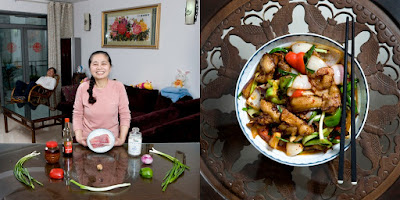 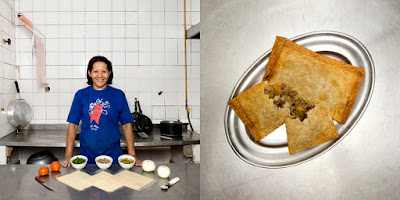 Read more »
Posted by ambisinistral at 12:41 PM No comments:

My operation recoveries always seem to involve popping painkillers, lounging in a lounge chair and watching goofy TV shows. For this operation's recovery the main show I've settled on is the Russian TV show Vyzhit Posle, which on Amazon Prime goes by its English title The Day After.

The show starts with 11 young people waking up in a cold war era bunker with no idea how they got there, or what's in store for them. Later it turns out that they're there to be test subjects in an experiment cooked up by some Eeeeevil Russian Oligarchs to create a master race (more on that in a bit). However, in the mean time they mainly get hysterical, flirt with each other and pair off.

The above video focuses on one of the couples: Velera who starts out as a rather frightening skinhead but morphs into the hero and Aijan, the beautiful but sensitive Asian girl from Kazakhstan who he falls crazy mad in love with for no apparent reason. At any rate, if you've watched the video you'll know there is a bump or two on their path to true romance -- mainly the fact Aijan gets bit by a zombie girl and ends up zombified herself.

As long as we're talking about zombie girls, you may have noticed in the video clip that Moscow appeared to be a bit deserted except for black-eyed zombie girls. Well, it turns out that the Eeeeevil Russian Oligarchs' plan to create a master race didn't exactly go according to plan. They intended to have all the hot Russian girls become fertile, while the ugly ones went sterile. I dunno… the Eeeeevil Russian Oligarchs claim this was to clear Mother Russia of future riff-raff, but I'm having a hard time following their logic. It just seems like a scheme to create a plethora of hot looking Russian woman down the road to me. Not that I'm objecting to their aim mind you, although sterilizing all the ugly people seems a bit crass.

Anyway, the experiment is a flop. Instead of creating more hot babes a master race it accidentally turns all the hot women into screeching, black-eyed zombies while the virus kills everybody else off. Oops.

Part of the charm of the show is its Russian nature as opposed to how an American show would portray things. For example the women, even the zombie babes, are pretty much girly-girls running around in high heels and dressed to the nines. The guys are of course pretty macho, endlessly threatening each other with guns when they're not babbling about the 'broads' they're locked up with. And some of the captioning is pure gold, such gems as "you are entering a zone of top secrecy" and referring to the promiscuous Russian escort in the bunker as a yum-yum girl.

The plot can be all over the place, with chunks of it just tossed out and forgotten once the story moves on, but all in all the show is actually entertaining in spite of all its plot holes and preposterous storylines.


Posted by ambisinistral at 12:13 PM No comments:


Get ready for a recrudescent weekend with Acoustic Hits.

Posted by ambisinistral at 6:46 AM 2 comments:

Email ThisBlogThis!Share to TwitterShare to FacebookShare to Pinterest
Labels: AC/DC, Back in Black, Music, TGIF

Going under the knife again 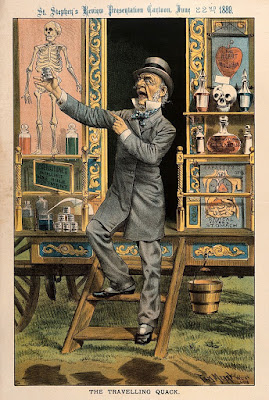 My handful of regulars may remember that a few months ago I had an operation and part of my recovery involved sitting in a lounge chair and watching crappy movies while riddled with pain killers.

Sadly for me my recovery took its toll, all the lounge chair lounging causing problems with my ulnar nerve. So now, since patent medicine miracle cures and internet advice did me no good, I need another operation to fix that problem. Again I'll be off-line for a bit, but it shouldn't be as bad as before.

Ah, the wonders of growing old.
Posted by ambisinistral at 4:13 PM 2 comments:


Get ready for a targeted weekend with Natacha Atlas.

Here's a few pictures of 1960s Florida from a tourist's perspective. Some of the kitsch is gone, some has just evolved. For example, Weeki Wachi, in the picture below got converted from a private tourist trap to a State owned park. The mermaid shows are still being staged.

There are a few more pictures after the jump, and more at Flashbaks post ‘Home to Meet God’ – 1960s Florida in Kodachrome. 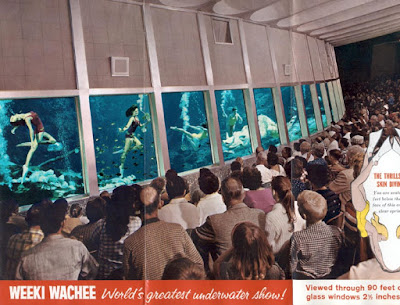 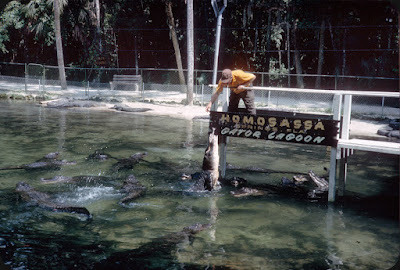 Read more »
Posted by ambisinistral at 8:34 PM No comments:

Walking in a Moroccan bazaar

Posted by ambisinistral at 8:55 PM No comments:

Email ThisBlogThis!Share to TwitterShare to FacebookShare to Pinterest
Labels: Morocco, walking in cities

The Thrill Is Gone


Get ready for an invisible horn section this weekend with Lucid Wake.

Posted by ambisinistral at 5:17 AM 3 comments: