These pictures look like they are stills from an old film noir movie, but these are actual crime scene photos from the 1930s-1950s. The photographer Merrick Morton discovered the negatives in 2014, restored them, and cataloged them. They can be scene at the Fototeka LAPD archives.

This small sample of the pictures is via Flashbak's Bloody Brutal Vintage Crime Scene Photos from the Los Angeles Police Department Archives. 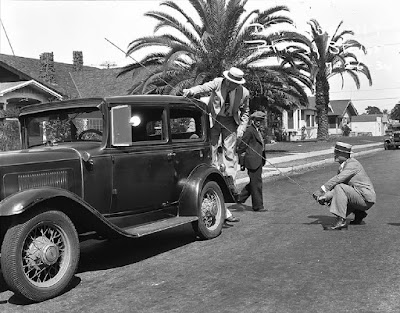 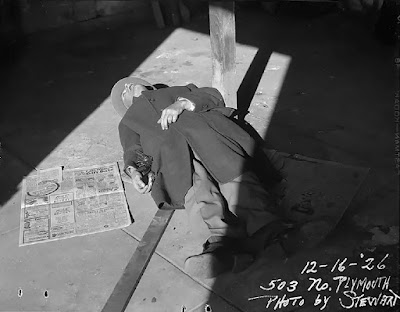 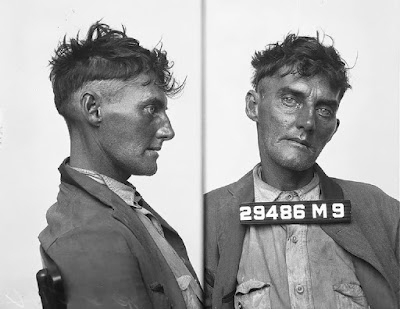 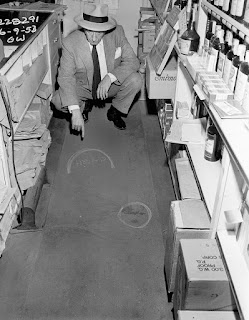 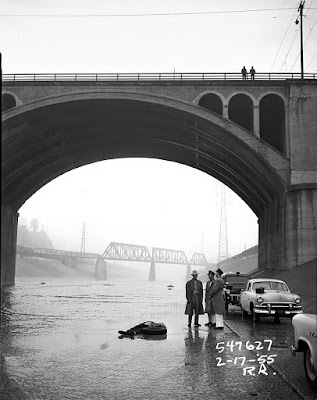 Get ready for an off-kilter weekend with Drew D'Agostino.

Posted by ambisinistral at 8:16 AM No comments:

A process which led from the amoeba to man appeared to the philosophers to be obviously a progress -- though whether the amoeba would agree with this opinion is not known. - Bertrand Russell

A group of people in Nepal cook and eat a meal. A comment to the video that I translated says it was a meal of chicken, soup with millet flour, fish, pickle, radish pickle and veggies. I don't know about the soup -- maybe that brown goopy looking stuff was a sort of millet paste?

The group cheerfully chats as they all have hand in the cooking at one time or another. It looks cold there to me. I did find it interesting how much time the kids spent fiddling around with their cellphones.

Posted by ambisinistral at 8:38 AM No comments:

Get ready for a certain weekend with The Coffis Brothers & the Mountain Men.
Posted by ambisinistral at 8:21 AM No comments:

Deborah Griscom Passmore, pictured below, was an artist who worked for the U.S. Department of Agriculture (USDA) in the late 19th and early 20th centuries.

At that time there was rapid growth in the cultivation of new varieties of fruit and nut trees. Color photography was not widespread, so artists were hired to record the varieties of fruit. The artist's drawing we used for documentary purposes, so above their aesthetic appeals, they had to be accurate portrayals.


Deborah Griscom Passmore (1840–1911), the most prolific of the Division’s pomological artists, produced over 1,500 paintings of a large variety of fruit and nuts—over 700 paintings of apples alone. She was raised in an Orthodox Quaker community in Pennsylvania before leaving to study at the Philadelphia School of Design for Women and the Academy of Fine Arts in Philadelphia. After teaching art for several years, Passmore relocated to Washington D.C. and began working at the USDA in 1892. She was immediately tasked with creating many of the Department’s exhibits for the World’s Columbian Exposition in Chicago in 1893. Her career at the USDA continued until her death in 1911.

Illustrating the subtle details of such a wide variety of fruit required technical and observational skills, patience, and long hours. An unnamed writer, whose informal biography of Passmore is kept with her papers at NAL, noted the following: “Her diversion was yellow cats, and, when exhausted from intense application of mind and body, nothing rested her so much as watching the graceful gambols of kittens. On any Sunday evening one might see her sitting under a lamp … with a large Bible across her knees, Dandy Jim in her arms, and Buttercup, as jealous as a cat can be, ready to spring at the first opportunity.” 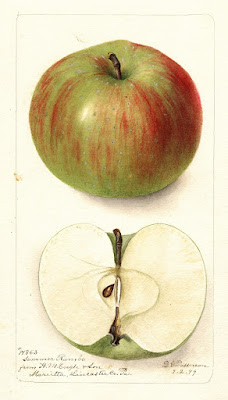 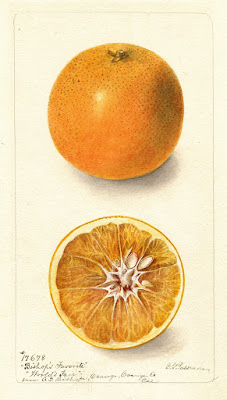 Read more »
Posted by ambisinistral at 9:17 AM No comments:

Her appearance changed his boring life

A tale of loneliness defeated and true love blossoming. Also, along with the poignant story and the beautiful locations for their dates, the acting really carries it. Oscar-level emoting in scene after scene. Always remember, "true love can never be silent."

Ermm... by the way, this may be a bit NSFW and if your wife/girlfriend walks in and catches you watching it you probably will get knocked upside the head. Aside from that, it is an emotional tour de force. You have been warned!

The Girl from Ipanema

Get ready for a wistful weekend with Elise Trouw.
Posted by ambisinistral at 8:01 AM 2 comments:

Kung Fu masters getting beat up

My YouTube feed recommendations are frequently a look into bizarre corners of the internet. I think it is YouTube's algorithm struggling to make sense out of my search patterns. Anyway, for some reason recently I've been getting all sorts of videos of obviously fraudulent Kung Fu masters getting the snot beat out of them by MMA fighters.

The above video by serpentza gives background on what that's all about. If you watch any of the Kung Fu master's videos they are obviously staged. Why they would then be stupid enough to get in a ring with an actual fighter is a head scratcher. Serpentza explains that it is the outgrowth of Chinese nationalism  that can't abide a western fighting style being superior to Chinese martial arts. It's all very strange.

By the way, serpentza's videos about China are pretty good. He is not a fan of the CCP. His YouTube page is worth browsing.
Posted by ambisinistral at 10:55 AM No comments:

Get ready for languorous weekend with Ella Fitzgerald and Louis Armstrong.
Posted by ambisinistral at 7:15 AM No comments:

These are romance magazine covers from the early and mid 20th century. It is striking that so few of them feature couples or men, mainly they are just portraits of stylish looking women. These examples, and those after the jump, are from Magazine Art's Romance and Confession Magazine collection. There are more at the link. 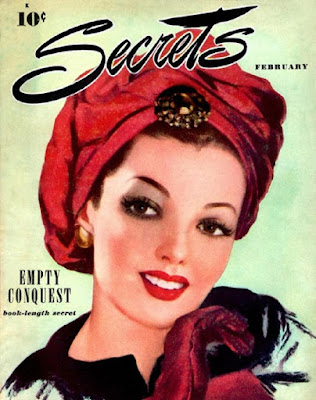 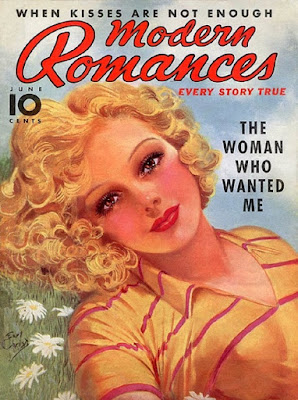 Read more »
Posted by ambisinistral at 12:58 PM No comments:


Based on the data, there seems to be no relationship between lockdowns and lives saved. That’s remarkable, given that we know for sure that lockdowns have destroyed economies the world over.


Every epidemic model being flung around in March built in the assumption that lockdowns would control the virus. In the early days, it was about preserving hospital capacity. Later it became a general principle: slow the spread. The methods were the same in nearly every country. Ban large gatherings. Close schools. Shutter businesses. Enforce stay-home orders. Mandate human separation. Masks. Travel restrictions.

Nothing like this has been tried in the whole history of humanity, certainly not on this scale. You might suppose, then, there was absolute certainty that there would be a causal relationship between lockdowns and the trajectory of the virus. Just as the FDA doesn’t approve a drug unless it is proven to be safe and effective, one might suppose the same would be true for a policy that shattered every routine and trampled human rights in the name of disease mitigation.

Surely! It turns out that this is not the case. It was pure speculation that lockdowns would suppress this virus, and that speculation was based on a hubristic presumption of the awesome power and intelligence of government managers.

For five months, governments all over the world have been freaking out, ordering people around to do this and that, passing mandate after mandate, and yet there is no evidence that any of it matters to the virus.

-The Virus Doesn’t Care about Your Policies by Jeffrey A. Tucker

Posted by ambisinistral at 3:51 PM 2 comments:

Drone flight through the Grand Palais

Posted by ambisinistral at 8:41 AM No comments: