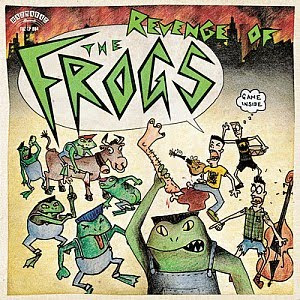 Anyways, the end result of all this tomfoolery was, after a barrage of mockery from the press over their idiocy, the police dropped the matter.  I was rather surprised by that. Usually in these depressingly silly matters the bureaucrats stick to their guns as best as possible to save face.
Posted by ambisinistral at 9:35 PM No comments:

Via walyou.
Posted by ambisinistral at 3:22 PM No comments:

Mad as hell, and not going to take it any more! 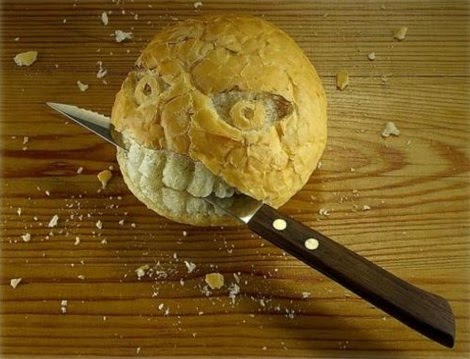 Actually I'm not mad, I just needed an excuse to post the above picture of a pissed-off dinner roll with a knife in its teeth. Although not as artfully done as the bread sculptures of Kittiwat Unarromhas, it serves it purpose as one of my pointless running blog themes. I call this theme -- Fun with Bread.

The above picture comes from BreadBlog. Although not a large blog, it has a good collection of odd things done with bread, including bread furniture, boxing gloves, toast with Hitler's face on it and a sandwich made from Legos.

More pictures below the fold.

The Things You Never Knew 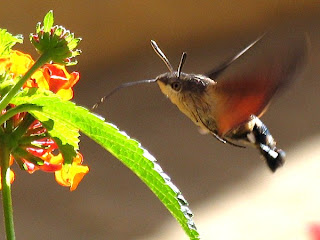 So Saturday I'm sitting on the patio with the Better Two-Thirds and a neighbor and we're having a beer or two and chatting. Out of the corner of my eye I see something in the Mrs. impatiens that I take for a big wasp, maybe one of those cicada killers.

I need to pay attention 'cause maybe it is and maybe it ain't, but some wasps or bee types can render me quite ill if they decide to zap me. But this thing is very odd - there it went again.

I finally went over and looked and here's what I found - a Hummingbird Hawk Moth. Never knew such a thing existed. Lovely little critter.

Posted by Knucklehead at 6:56 PM 9 comments:

Have you no sense of decency, madam? 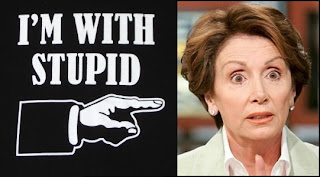 Obama stepped into a political mine field when he waded into the Ground Zero Mosque issue.

He allowed the notion of tolerance, which by itself is a laudable goal, to trump any consideration of other issues surrounding the proposed mosque. In particular, he dismissed the skepticism much of the American public feels towards the motives and funding sources for the mosque.

His political miscalculation has inflamed the issue, and in fanning the flames he has forced many of his fellow Democrats to take a stand on an issue they would rather avoid. Perhaps the most bizarre and tone deaf of all is the reaction of Nancy Pelosi. As the Wall Street Journal reports:

Pelosi told San Francisco's KCBS radio that "there is no question there is a concerted effort to make this a political issue by some. I join those who have called for looking into how is this opposition to the mosque being funded," she said. "How is this being ginned up?"

Again, the American public who are opposed to the mosque being built so close to Ground Zero oppose it because they see it not as an act of outreach, but as an act of triumphalism. They also, since the backers of it are opaque, suspect that it is going to be funded by sources inimical to the U.S.

Pelosi blithely dismisses those concerns as nothing more than a smoke screen for political opportunism, and rubs salt into the wound by distastefully, and absurdly, questioning the funding sources of the people who are arguing against the mosque's location. Further, she calls for an investigation of opponents to the project.

However, we're still not done. It gets even more absurd. From the Washington Examiner we discover that at the same time she is working herself into a lather over the anti-mosque cabal her colleague  Rep. Debbie Wasserman Schultz, D-Fla, an addled-headed nitwit I'm sorry to say is from Florida, is sending out the following emails:

Let’s show the Tea Party crowd that they’re no match for our grassroots strength. Stand with us against the Right’s despicable attacks and their fat cat fundraising by joining Team Pelosi — an elite group of grassroots Democrats who are leading the fight against radical Republican candidates in races nationwide.

We have set a goal of reaching 10,000 new members for Team Pelosi. House Republicans are claiming to have experienced a five-year high fundraising surge. We can’t let up now — we must keep pace. That means we need just 11 new members from Washington by our deadline this Thursday.

As a member of Team Pelosi you will receive the inside scoop on what’s happening in our campaign to strengthen and secure our House Majority. You will be invited to attend members-only phone and web-based political briefings by top Democratic experts and receive special Red Alerts about breaking campaign news.

So, at the same time she is calling for an investigation of the funding of wide spread and genuinely grassroots anger over the mosque situation, she is sending out a mass emailing begging for money and feigning popularism. Have you no sense of decency, madam, at long last? Have you left no sense of decency?

By the way, if you so desire, you too can bolster your grassroots, street cred by owning your own Team Pelosi tote bag. You'll have to Google for it though, I can't quite bring myself to link to the thing.

Posted by ambisinistral at 7:57 PM 3 comments: 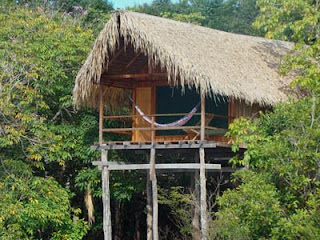 I'm on vacation at the moment so posting will be erratic. Then again, my posting is always erratic so likely nobody would have noticed.. The wife and I flew to Manuas in Brazil. Odd airport. The runway was, outside of a dirt strip in Masawa, the roughest I've ever landed on. The plane bounced and rattle during it's entire roll out. To reduce a traveller's confidence even more, pushed onto the grass were three or four completely filthy cargo jets.  The whole place had a slap-dash feel to it.

We stayed in Manaus for only one day, and then headed for a place called Juma Lodge in jungle. The a picture is of one of their cabins. I didn't take it, I swiped it off of the internet. perhaps when I get back I'll post a photo or two of my own.

I must say the rain forest was not at all what I expected. Many more people were living in it than I expected (the place I stayed is only about 4-5 hours south of Manaus -- I imagine human habitation thins out considerably the farther upriver one goes). I expected to be swatting bugs endlessly, but they really weren't a problem at all. The heat was oppressive during the day, but at night there were nice breezes that were refreshing.

The jungle was very peaceful. Above all, it is very nice to be out of the news loop for a bit and just laze in the hammock.At any rate, 'll be off the blog for a bit, so the Chinese spambots will have a field day.

Posted by ambisinistral at 2:53 PM 2 comments: