These are covers, mainly from the 19th century, of Scientific American. The magazine bills itself as a publication that covers art, science and mechanics, with other subjects occasionally added to the tag line. It is interesting in just how much it does focus on technology, unlike today's Scientific American, which is much more science oriented.

The covers on this page, and those after the jump, are from the Magazine Rack's Scientific American (1845-1909) Collection. If you follow that link you can actually page through the old issues and see all of their content. Be warned, it can be a tremendous time sink. 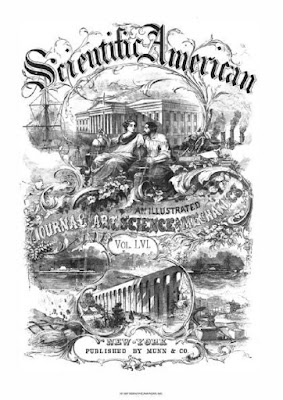 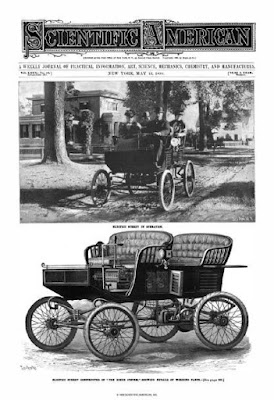 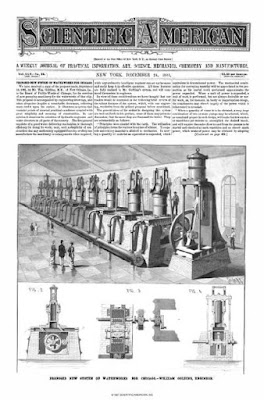 Read more »
Posted by ambisinistral at 5:01 PM No comments:

These films are from Envisioning Chemistry, which is part of The Beauty of Science website. Much good stuff at both links.


Get ready for a goofily gothic Halloween weekend with HIM.

Posted by ambisinistral at 8:47 AM No comments:

The Lights of Canopus

These are illustrations from the 19th century Persian book Anvār-i Suhaylī (Lights of Canopus). It is a translation of a much older Indian work, the Panchatantra. The book is a collection of animal fables. 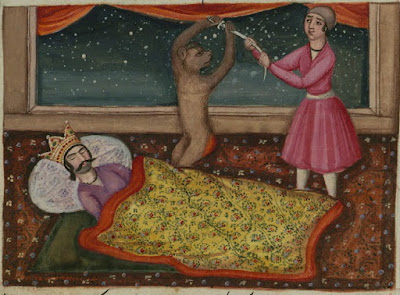 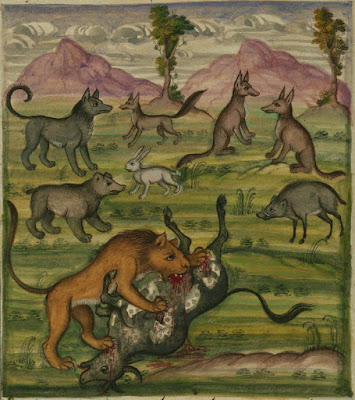 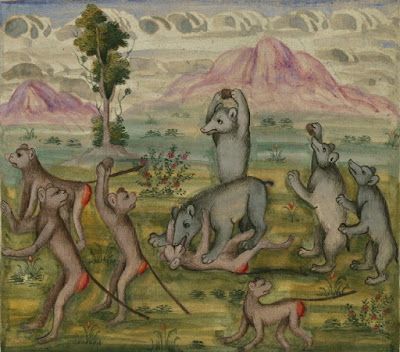 Read more »
Posted by ambisinistral at 4:28 PM No comments:

Jaka Parker, an Indonesian variously described as a freelance photographer or embassy employee has a YouTube channel with numerous videos of North Korea. I imagine they are a bit dodgy -- how dodgy I don't know -- but they are still quite interesting.

Even if this video is an attempt to film a Potemkin village, the largely empty streets and line of uniform, green food stalls deliver their own message.


Posted by ambisinistral at 11:19 AM No comments:

Scandal in the art world

OK, I can understand a rake like Vincent being in this picture, but Mona? Tsk, tsk, tsk... if she's not careful, she'll be getting earlobes through the mail.

The image is from The Surreal Collages of Barry Kite.

Posted by ambisinistral at 5:29 PM No comments:

Bird on a Wire

Get ready for an avian weekend with Willie Nelson's cover of the Leonard Cohen classic.

I guess you could say an organette (Rolmonica is a brand name) is the harmonica version of a player piano. They were first made in the 1860s and were still being sold in the early part of the 20th century. Rolls were available for all popular songs of the time.

Posted by ambisinistral at 6:17 PM No comments:

Ladies and gentlemen of the Victorian era naturally wanted to be physically fit, particularly if they rode trains and might have to fend of a railroad lunatic or two. However, physical labor was for the lower classes, so they needed a rather more civilized and gentile method of exercising.

As the Daily Mail chronicles in their article Inside the Victorian gym, the Swedish physician Dr. Gustav Zander solved their dilemma by inventing numerous exercise machines for use in spas and gyms worldwide.

Pictures here, and after the jump, are some of his machines. There are more, as well as information about Dr. Zander at the above Daily Mail link. 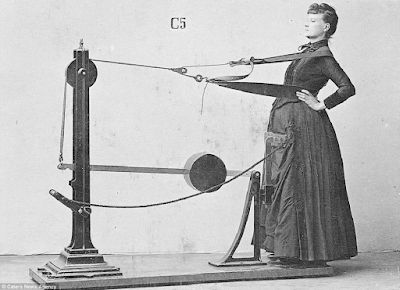 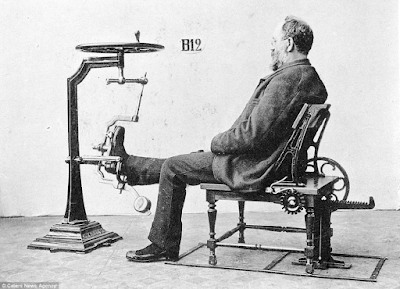 Read more »
Posted by ambisinistral at 10:53 AM No comments:

“Everything made by human hands looks terrible under magnification--crude, rough, and asymmetrical. But in nature every bit of life is lovely. And the more magnification we use, the more details are brought out, perfectly formed, like endless sets of boxes within boxes.”


Posted by ambisinistral at 7:28 PM No comments:

Get ready for a domestic weekend with Big Joe Turner and his band.

Posted by ambisinistral at 7:58 AM No comments:

Sovetskoe Foto (Soviet Photography) was a magazine aimed at amateur Russian photographers. It features articles on technique, equipment and examples of photographers work. These are covers from Sovetskoe Foto, and as you can see many of them in the style of Soviet realism so familiar from their propaganda posters.

They're from the Magazine Rack's archive of  Sovetskoe Foto, a site that digitizes magazines. At that site the contents of the magazines are archived as well, so you can flip through them and get all their content. There are more covers after the jump, and many more at the link. 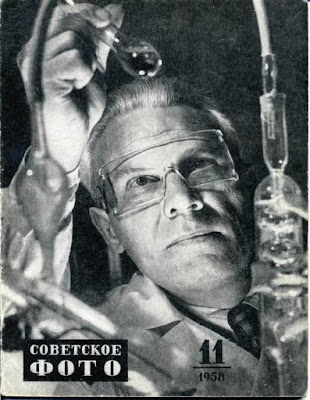 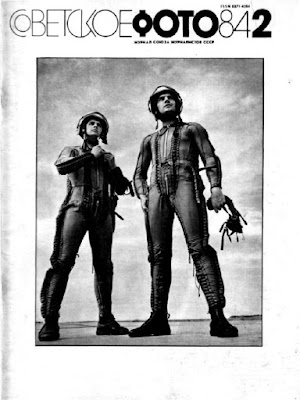 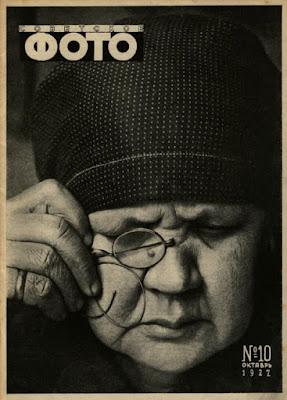 Read more »
Posted by ambisinistral at 11:38 AM No comments:

Posted by ambisinistral at 6:47 PM No comments:

One does not discover new lands without consenting to lose sight of the shore for a very long time. - André Gide


Posted by ambisinistral at 9:07 AM No comments:

Email ThisBlogThis!Share to TwitterShare to FacebookShare to Pinterest
Labels: Columbus

We have scary clowns popping up on roadsides, the Victorians were plagued with railroad lunatics. When railroads were a new development there were numerous reports in the papers of normal people going berserk and causing all sorts of mayhem on them.

It was thought that the very act of riding a train could trigger such behavior, From Atlas Obscura:


As the railway grew more popular in the 1850s and 1860s, trains allowed travelers to move about with unprecedented speed and efficiency, cutting the length of travel time drastically. But according to the more fearful Victorians, these technological achievements came at the considerable cost of mental health. As Edwin Fuller Torrey and Judy Miller wrote in The Invisible Plague: The Rise of Mental Illness from 1750 to the Present, trains were believed to “injure the brain.” In particular, the jarring motion of the train was alleged to unhinge the mind and either drive sane people mad or trigger violent outbursts from a latent “lunatic.” Mixed with the noise of the train car, it could, it was believed, shatter nerves.

In the 1860s and ‘70s, reports began emerging of bizarre passenger behavior on the railways. When seemingly sedate people boarded trains, they suddenly began behaving in socially unacceptable ways. One Scottish aristocrat was reported to have ditched his clothes aboard a train before “leaning out the window” ranting and raving. After he left the train, he suddenly recovered his composure.

There was also a concern that insane asylums were often situated close to rail lines and that escaped inmates would gravitate to the trains to escape the area and cause all manner of mischief in the process.

Finally, trains allowed women to travel alone, and so there was an aura of sexual danger in riding them. From the same article:


After going on a particular train ride, female novelist George Eliot stated with tongue firmly in cheek that upon seeing someone who looked wild and brutish, she was reminded of “all the horrible stories of madmen in railways.” Elliot seemed to relish the excitement of a possible confrontation and sounded rather disappointed when the figure turned out to be an ordinary clergyman. 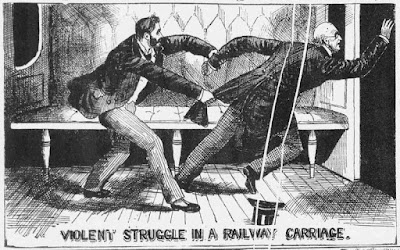 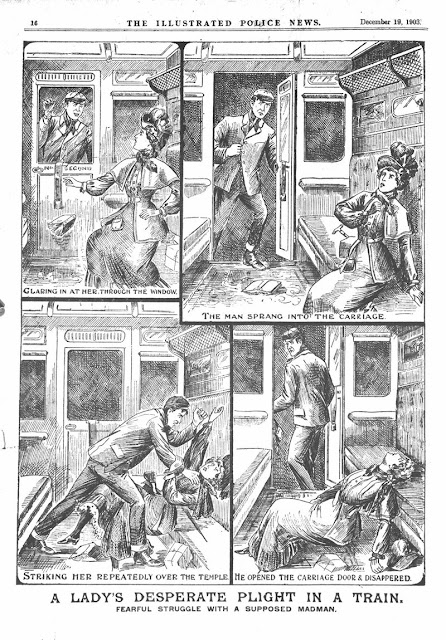 Posted by ambisinistral at 9:42 AM No comments:

Get ready for a weekend of gypsy hipsterism with the Barcelona Gipsy Klezmer Orchestra.

In the above video a fellow by the name of Mike Paterson chats with his buddy Nephetia (sp). What sets this conversation apart is the fact that Nephetia (sp) is a Bigfoot, and a talkative one at that!

I'm not sure why the picture of the tent and the "orbs" accompany the audio. One would think a video, or at least some pictures, of Nephetia (sp) would be more useful in establishing the authenticity of this little woodland coffee klatch.

Then again, no need to be a cynic. After all, if you can't believe what you find on the internet, what can you believe?

Posted by ambisinistral at 1:17 PM No comments: 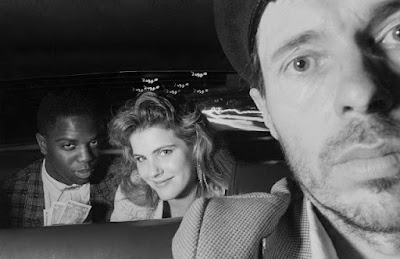 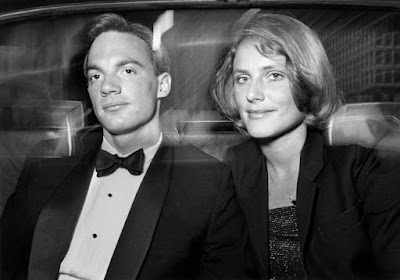 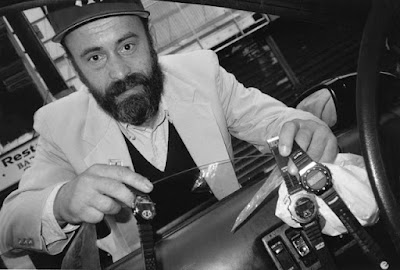 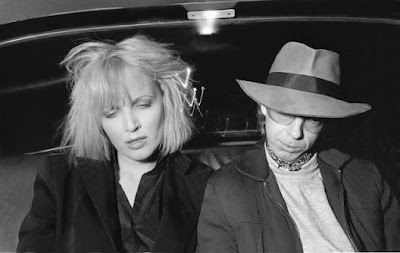 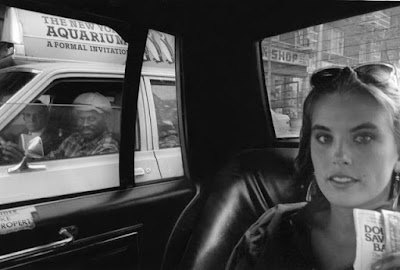 Posted by ambisinistral at 4:30 PM No comments:

It's Good To Be King

Sad news about Tom Petty. He suffered a heart attack and is now off life support with no brain activity. He is not expected to survive. RIP Tom, you were a king for sure.

Email ThisBlogThis!Share to TwitterShare to FacebookShare to Pinterest
Labels: It's Good To Be King, Music, Tom Petty

The book China, in a series of views : displaying the scenery, architecture, and social habits of that ancient empire was published in 1843. As the title implies, it was a guidebook to China when it was still largely unknown and mysterious to Westerners.

These, and the images after the jump, are some engravings from that book. They are particularily fine examples of plates from travelers' books of the time. The scans are from Old Book Illustrations. Enjoy. 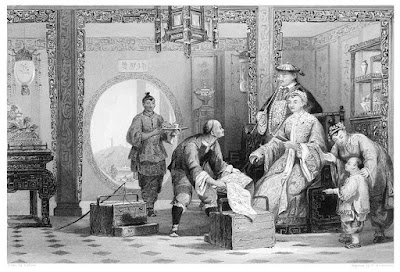 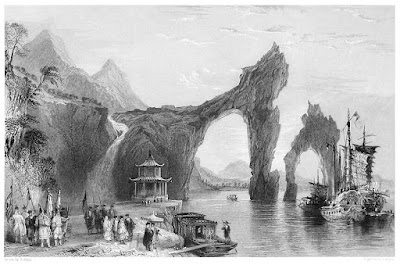 Read more »
Posted by ambisinistral at 5:10 PM No comments: