Canals are man-made waterways that either serve as drainage controls or for transportation. Mankind has been digging canals for a long time. Many are scenic as well as being utilitarian. These are some paintings of canals, from Europe to Asia. I left out the two largest canals, Suez and the Panama Canal.

I almost bought a house on a canal. We called it a large drainage ditch, but on the map it is called the Pearce Canal, so a canal it is. Alas, the homeowner was asking too much for the place, so we lost out on the bid. 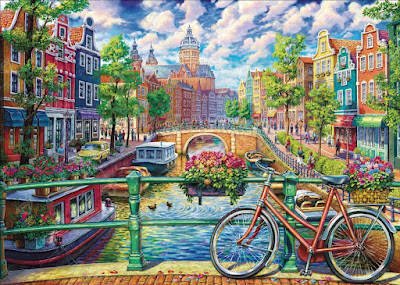 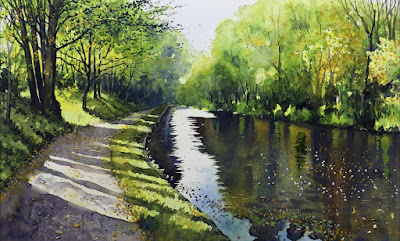 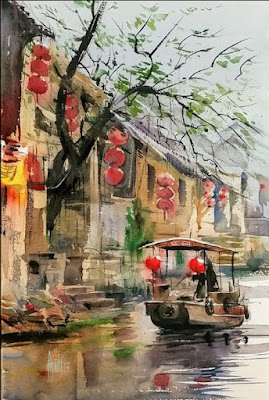 Read more »
Posted by ambisinistral at 11:02 AM No comments:

Email ThisBlogThis!Share to TwitterShare to FacebookShare to Pinterest
Labels: Art

A fellow at Warped Perceptions builds and tests a jet powered scooter. It seems dangerous to me, but who am I to question another man's ambitions. At his YouTube channel you can see a lot of other crazy projects he's embarked on.

Posted by ambisinistral at 11:57 AM 2 comments:

Going Up The Country

Get ready for a bumpkinized weekend with Pumpkins Trio.

Posted by ambisinistral at 6:41 AM No comments:

A helicopter ride in the mountains of Kyrgyzstan

A helicopter was transporting some British, German, Polish and Japanese tourists to a camp at the base of a glacier in the mountains of Kyryzstan. It crashed when it attempted to land. The ground at the landing site gave way. The pilot attempted to recover, but the copter ended up rolling down a hill. Above is video from inside of the helicopter by one of the passengers. Below is a picture of the helicopter after the crash.

All things considered, it is amazing how quiet the passengers are during the crash. Surprisingly there is no screaming -- if I had been aboard my Navy training would surely have clicked in and a stream of hysterical cusswords would have spewed out of my mouth. Nobody was killed, but there were some serious injuries.

From a Daily Mail article David, the person who shot the video, describes the crash:

The weather on that day was almost perfect for a flight. There was barely any wind and the skies were clear. We took off around 8:30 in the morning. The flight time was estimated to be around 45 minutes. We climbed to about 4500 meters in altitude, which is close to the maximum altitude this helicopter can manage.

The glacier base camp was at 4010m. At about 9:05am, I started to record the video which would eventually capture the crash. The descent to the base camp was very calm and we barely felt any turbulence.

The helicopter slowly lowered over the landing platform, which was really just a smoothened-out part of a gravel hill, about 100m from the main camp and was marked with two spray painted oil barrels. When we finally touched down, the wheel on the right side seemed to slide away, perhaps because of a hole underneath or a rock getting lose.

As a reaction to this, the pilot started to accelerate again and pitched the helicopter to the left rather rapidly. At this point he had already lost control of the machine.

We were probably too heavily loaded and too high in altitude for a sudden go-around manoeuvre. While trying to gain altitude again and turn the aircraft around, we violently hit the ground with the wheels and bounced off again.

After that it seemed for a moment like the pilot was regaining control again as he was trying to fly a curve back towards the lower parts of the valley. At that time, we were already too low and flying directly towards a steep wall of ice and gravel. We collided with the wall head-on and the force of the impact threw everyone and everything to the front of the cabin.

The wreckage rolled down sideways until it came to a stop at the bottom, right next to a small glacier lake. All of the passengers and their luggage, including us, lay piled up in the front of the cabin.

I was buried under several large backpacks and the Japanese tour guide who was lying on top of my legs, making it impossible for me to move. The panic set in when I felt the stinging of kerosene around my feet as my shoes were being drenched in it and the fear of being burnt alive at any second made me struggle even harder.

Eventually, I managed to push myself out and scramble towards the back of the cabin. Luckily for us, there was a large hole torn into the side by the impact, through which we could escape. Help was already on the way and people from the base camp came running over to offer their help. They barely had any medical equipment though, so they had to transport the badly injured on wooden boards or pallets.

The gift of reading your mind

First thing will be
a breakdown. To cleanse myself.
Then― burn the cenotaph
of black bridge.

The fringe vocabulary
repeats the axe's argument.
You can kill a star without
dust and slogans.

You were thirsty. Don't
drink large tears of
sky. No sun, no moon was
worthy of witnessing a
fall of pride.

The evil thoughts. Do
they come on their own? You
did not try to invite them?

I will not purchase the gift
of reading your mind.

Posted by ambisinistral at 8:22 AM No comments:

Get ready for an unruly weekend with First to Eleven.

Posted by ambisinistral at 8:59 AM No comments:

The mystery of holes in plugs

Posted by ambisinistral at 9:24 AM No comments: