Because it follows the Thanksgiving holiday this Friday isn't really the start of a weekend, so I will forgo my usual Friday video and instead, in honor of Black Friday shopping madness, I'll post a stampede video.

Not sure what would be more intimidating, those elephants or Walmart shoppers at the moment the doors open for the Black Friday sales.
Posted by ambisinistral at 12:30 AM No comments:

In popular culture the word voodoo has came to be indelibly associated with sticking pins into dolls, black magic and creating shambling zombies. To differentiate the actual Haitian religious practice -- which is a mixture of West African beliefs and Catholicism -- the spelling vodou is used these days. Normally such renaming annoys me, but I can see the rationale in this switch.

Vodou flags are a mixture of French battle flags with West African bead work. They feature beads and sequins. Originally they were religious in intent, although with the growth of tourism to Haiti they have also adopted a more secular and commercial purpose. From Haitianna's article Vodou Flags - An Essay on Collecting:


As Vodou flags made their way out of temples and into Port-au-Prince galleries and the hands of foreign buyers, curiosity about their purpose and function grew along with the numbers of people making flags. Some artists like Georges Valris imbue their flags with Christian imagery such as angels. Valris , who denies any belief in voodoo, regards flag-making as a commercial enterprise. Other flag makers, including Jean Baptiste Jean Joseph, are diehard voodooists. He once told me a story about seeing the mermaid figure of La Sirene, who controls the fate of anyone dealing with the ocean, actually walking out of the sea. But Joseph is also practical, using the flag medium in documentary fashion to portray what he sees around him including cats and lizards. This broad range of pictorial representation makes him a welcome anomaly among the current crop of voodoo flag makers, a group whose numbers seem to be swelling in recent years. With his innate color sense and use of luxurious materials such as velvet and satin, Joseph is setting a high standard for the next generation of flag makers to follow.

Each flag maker is known for something special. For Yves Telemaque, it’s the fantastic and optically challenging borders of his flags. By surrounding the central image in triangles and circles, then using faux pearls to accentuate contrasting colors, Telemaque rivals the paintings of Jasper Johns. Then there are traditionalists like Clotaire Bazile, who adheres to voodoo heritage in his portrayal of gods and goddesses and their symbolism. His simple diamond borders recall the careful workmanship on American patchwork quilts. Even newcomers to the field are distinguishing themselves. Lerisson Dubreus uses the trapunto technique of his forebears who made flags half a century and more ago.

These examples, and those after the jump, are from Indigo Arts Gallery's catalog of Haitian Vodou Flags. They sell the flags (as well as artwork from other regions) if you're interested in purchasing one. 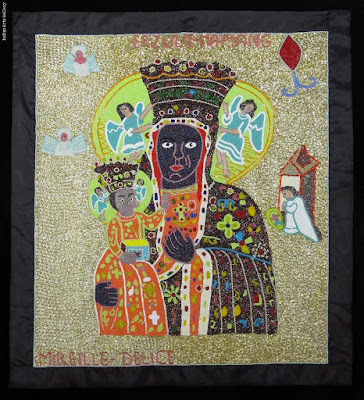 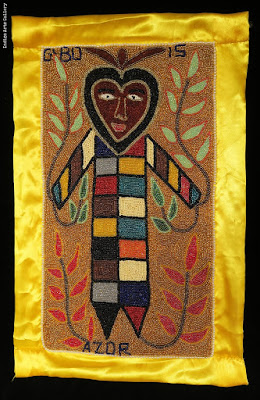 Read more »
Posted by ambisinistral at 8:50 AM No comments:

A small and complex machine

A nicely filmed video that shows the design and fabrication of a Patek Philippe wristwatch. The effort and care put into machining, finishing and then assembling the tiny parts of the watch's mechanism is amazing.

In an earlier post The evolution of complexity in watches I did reflect upon how deceptive the apparent complexity of watches could be:


Above are three main types of time pieces: ... a cheap crystal watch, ... a mechanical watch's mechanism, ... a digital alarm clock.

Of the three the mechanical watch visually seems to be the most complex, but there is little doubt that the digital clock is actually more complex by orders of magnitude. While the switches, LEDs, capacitors and resistors are simple enough, hidden within the IC chip, and discernible only by microscope, are circuits of immense complexity.

Indeed, just like extremely large scales escape us, our perception is far too crude to make real sense of something so small. In the end we only see a slice of reality.


Get ready for an multi-national weekend with various artists.

Posted by ambisinistral at 6:32 AM No comments:

This video is about three stews that were made from ancient Babylonian tablets that contained the oldest known historical food recipes. From The History Blog's article Babylonian stew which is about the Yale project that recreated these dishes:


The Yale-Harvard team prepared three recipes which were all from one tablet [cuneiform tablets in the Yale Babylonian Collection]: two lamb stews — one with beets and one with milk and cakes of grain — and a vegetarian recipe enriched with beer bread.

The variety of ingredients, complex preparation, and cooking staff required to create these meals suggest that they were intended for the royal palace or temple — the haute cuisine of Mesopotamia, says Lassen. Few cooks were able to read cuneiform script, she adds, hence the recipes were most likely recorded to document the current practices of culinary art.
...

“Making a stew is a very basic human thing and I think that is one of the reasons that we really went into this project,” says Lassen. “There is something really human about eating and food and tasting things, and that’s what we wanted to explore by recreating these recipes. Maybe not entirely as they as they would have prepared it — maybe our ingredients taste a little bit different — but still approximating something that nobody has tasted for almost 4,000 years.”

Posted by ambisinistral at 9:04 PM No comments:

These are covers from Beadle's New Dime Novels. They were published between 18974 to 1886. The featured a mix of historical, war, adventure ands western fiction. At the time of their publication the settling of the American West was in full bloom. Many of the stories revolve around the Indian wars of the time. As you might imagine considering the conflicts, the Indians are portrayed as dangerous and bloody antagonists. Not surprisingly, it seems that white women were also frequently at peril in these stories.

They are from the Nickels and Dimes website. There are more pictures after the jump as well as many more at the link. Also, if you follow the link the full magazines are archived, so you can read the stories in them. 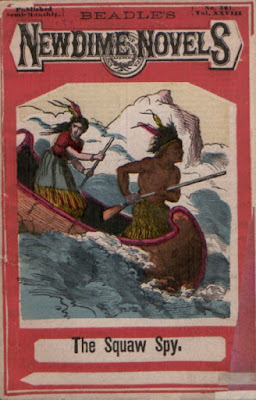 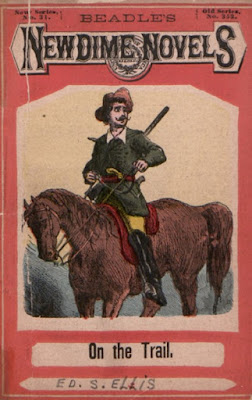 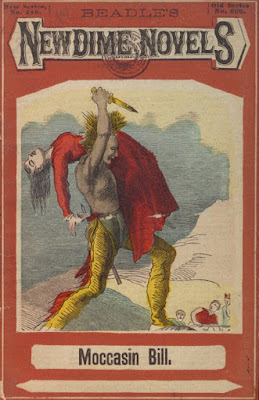 Read more »
Posted by ambisinistral at 8:52 PM No comments:

This video features interviews with three North Korean defectors who have adjusted to life outside of that country. In the first part they recount their experiences growing up in North Korea, in the second their impressions of the wider world after their defections (two of them even spent time in the States).

Their comments about Trump are interesting. Prior to him they considered Korean diplomacy to be in a sort of equilibrium, with the Kim's saber rattling to get aid. The three obviously considered Trump to be dangerously unpredictable and seemed never to understand that it is a negotiating tactic to reshuffle the diplomatic deck and limit North Korea's options in the process.

The quote that did jump out at me was when one of them discussed their impression of the U.S., "Real freedom means respecting others' freedom as much as you value your own". Sadly, not so much these days.

Posted by ambisinistral at 12:40 PM No comments:

Get ready for an early morning beer this weekend
with Daryl Hall, Robby Krieger, Ray Manzarek and others.

I can't imagine anybody who would really think that smoking anything would help with breathing problems, but I'll be generous and suppose they meant well and just missed the mark by a mile or two. I do love the "they may be safely smoked by ladies and children" line in the above ad. The voice bubble coming out of the guy's nose is also a sight to behold. Then again, who am I to doubt the medical advice of a talking nose?

These samples are from the  Messy Nessy post A Brief Compendium of Medical Quackery. There is much more quackery at the link. 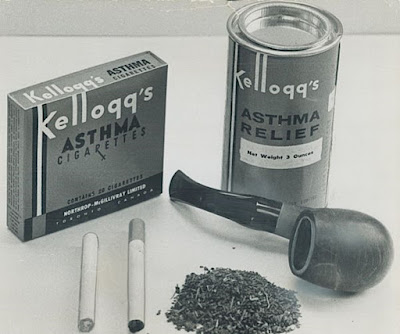 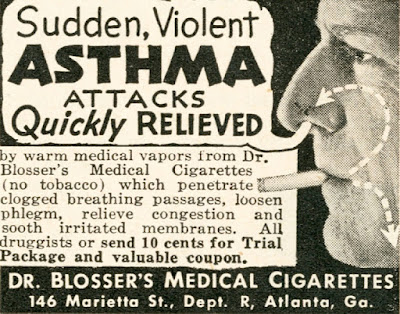 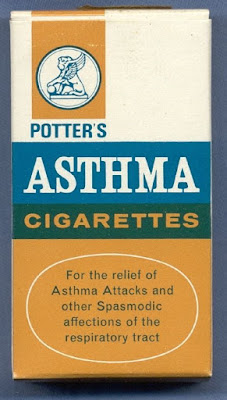 Email ThisBlogThis!Share to TwitterShare to FacebookShare to Pinterest
Labels: quackery

Returning to Earth from the ISS

An interesting video on how the Soyuz capsule is used to return crew from the International Space Station. The actual touchdown of it looks pretty brutal.

Posted by ambisinistral at 1:09 PM No comments:

Today we remember our veterans. Walter Hare of the West Yorkshire Regiment recalls when he first went to the front line in December of 1916:


We moved to the right, I remember, got into a church yard – a cemetery – and then dropped down into a trench. And I couldn’t believe it; I was knee deep in mud for a start. I’d never been told about the Somme and the mud on the Somme, it was all new to me. Well we sloshed down this communication trench and we passed a support line and then we went further up and got to what was the front line. And then that was the first we knew about trench warfare – we were told we hadn’t to show our heads above the parapet because there were snipers and they would get us if we did, you see, so we had to be careful. It was a bit of a shock because I could hear shells exploding and rifles and machine guns going, and I thought, ‘Well, I shan’t be here above five minutes.’ It depressed you a bit; just I’d not been warned about it, you see, I’d no idea what it was like. (source)

These videos are from the YouTube channel Aoyama Square. They show various example of traditional craftmanship and are very nicely filmed. Above is a woodworker making tubs and barrels. Below are examples of copper casting, wood carving and textile dyeing. There are a lot more videos at the link.


Posted by ambisinistral at 12:33 PM No comments:


Get ready for a nonsensical weekend with Big Den Hegarty.

Posted by ambisinistral at 8:33 AM No comments:

Inside the UB 110, a salvaged WWI German submarine

In 1918 the UB 110 was sunk. It may have been the last submarine sunk in WWI. The English salvaged it, intending to commission it into their navy, but the war soon ended and UB 110 was scrapped. How they could have ever figured out all the controls and valves needed to sail her is beyond me,

These pictures, and those after the jump are photographs that were taken while she was in dry dock being refitted. They are from Rare Historical Photos post Inside the German submarine SM UB-110, 1918. There are more pictures as well as more information about the UB 110 which, including a possible atrocity at the time of her sinking, at the linked article. 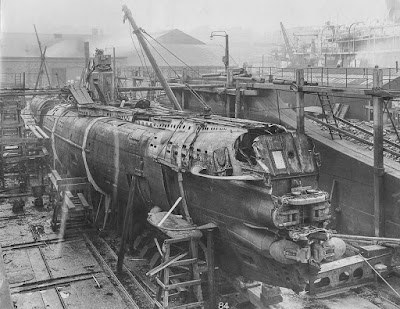 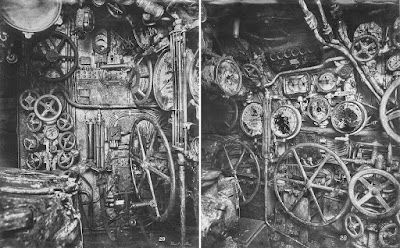 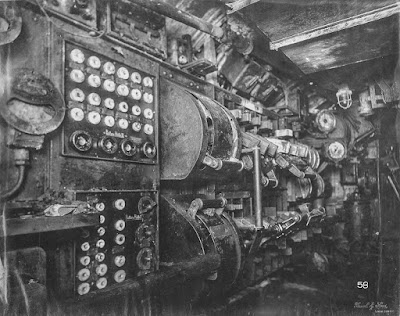 Read more »
Posted by ambisinistral at 8:44 PM No comments:

Adrift in a void

Posted by ambisinistral at 9:28 PM No comments:

A lesson in marital discord

The Adams and the Kings argue and in the process the narrator give us a lesson in marital discord. Often times when looking at old film and photos the small details rather than the central subject is what catches one's eye. In this case, for me at least, the décor of the two homes, especially the Kings', is more interesting than the fights.

Posted by ambisinistral at 10:39 AM No comments:

Get ready for a one-sided weekend with Tatia Kay.