In 2012 the U.S. Battleship Iowa set sail for San Pedro to become a museum ship. Accompanying her on departure was the WWII Liberty ship, the SS Jeremiah O'Brien. This is a short feature of the O'Brien getting underway, with a lot of shots taken inside the engine and boilers rooms showing the O'Brien's old triple-expansion steam engine in operation.

Posted by ambisinistral at 1:47 PM 2 comments:

The Ogilvy & Mather ad agency put together a clever campaign for Tamya, a company that sells plastic models and radio control kits, that featured ads for model kits of popular conspiracy theories. Here, and after the fold, are those kits. You can click any image to enlarge it.


Read more »
Posted by ambisinistral at 6:15 PM No comments:

The Wonders of Vacuum Tubes

Although they've been replaced by transistors and integrated circuits, there was a time when vacuum tubes were a fundamental component of modern electronics. Now exotic, they were common during the first electronic revolution.

Today you can buy hard drives, graphics cards and the like in stores, in the old-timey days vacuum tube testers were readily found in hardware and grocery stores. You could test vacuum tubes and buy their replacements easily, and it was a skill any do-it-yourselfer was expected to have.

Where there are products there is advertising. The problem is they were, like an oil filter in an engine, just a part of a machine, and not a very sexy or graphically interesting part at all. So how to sway consumer dollars?

The vacuum tube ads were pretty straight forward -- either a picture of a tube with copy extolling their virtues, or a their place in the wonders of radio emphasized. Here, and after a the fold, are some old ads that tried to sell what was then a mundane part of electronics. 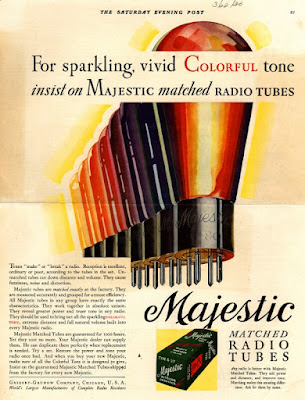 Read more »
Posted by ambisinistral at 11:18 AM No comments:

So Long. That's All. Goodbye.

With tomorrow's inauguration looming Bill Haley & Comets' See You Later Alligator springs to mind. Catchy and cheerful tune that fits my mood at the moment.

As an aside, I saw the Comets, I think it was the bassist Al Rapppa's version of the Comets, play in a slightly sketchy local bar. They put on a good show. During the break -- since they were one of the founders of Rock N' Roll I bought them a beer.

Whoo-boy, what a mistake. Talk about best friends forever! There was no getting rid of them and one drink led to another until my wallet was pretty much empty. Still, a good time was had by all and they were nice guys with good stories. In hindsight, I guess it was well worth the money.

I suspect Obama is another guy we'll be unable to get rid of, but our time with him at the table talking about the old days, betwixt lecturing us on what scum we are, will be much less enjoyable.


Posted by ambisinistral at 4:05 PM No comments:

Email ThisBlogThis!Share to TwitterShare to FacebookShare to Pinterest
Labels: Bill Haley and the Comets, Obama, Politics 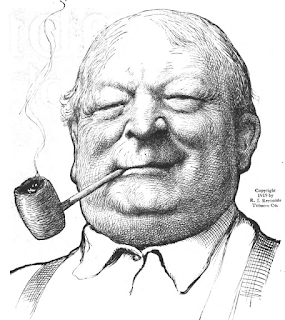 Morgan, in the comments to the previous post, pointed me towards Language Log's post "Just let some joy smoke sift into your system". It is a 1919 ad for Prince Albert tobacco, and the ad copy is absolutely hilarious, featuring such gems as " two-fisted-man-tobacco", "breezing up the pike with your smokethrottle wide open" and "put pep-in-your-smokemotor".

There are several other old Prince Albert ads at the link, and they are equally as entertaining.

The blog itself is a language-centric blog, with a lot of discussion of Chinese, and a lot of entertaining articles on other topics as well. I'll be adding it to our blog roll.

Posted by ambisinistral at 12:43 PM No comments:

Above is a video of the VZ-9 Avrocar prototype VTOL aircraft, which resembled a UFO, being built and test flown. The Avrocar was a joint venture between Canada's Avro Aircraft and the U.S. military. Originally it was supposed to be a high speed, high altitude interceptor, but -- as you can see in the video -- it fell far short of that goal.

The video is long, with the test flight portion starting at the 18 minute mark. However, the earlier part is an interesting look at 1950s technology, engineers, machinists, geek styles and so forth.

Posted by ambisinistral at 3:18 PM 2 comments: