Sooner or later in life, we will all take our own turn being in the position we once had someone else in. ― Ashly Lorenzana

Posted by ambisinistral at 7:30 AM No comments:

Get ready for a frantic weekend with the Ventures.

Beauty is youth at all ages 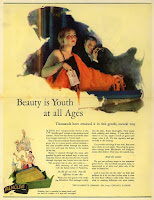 These are graphics from Palmolive soap ads from the 1920s through the 1950s. Palmolive's ad agency used several templates for the ad layouts, with one of the most common being a strong graphical image at top with teaser text (the rather incoherent phrase that acts as the title of this post is one of the teasers). The image to the left shows the full ad that the above image is taken from.
The Palmolive ads are aimed at women, and they stress youth, beauty and romance. Occasionally the interests of the day surface -- during the war years the men appear in uniform, there is a spate of ads featuring the Dionne quintuplets, while early ads featured an Egyptian motif that was probably a result of the finding of Tut's tomb and the burst of interest in Egyptology at the time.
By contrast today's soap ads are much more fixated on natural ingredients, moisturizing, scents and skin care. I wonder what the future holds?
These ad images, and those after the jump, were taken from the Duke University Archive's Palmolive Company collection. There are more examples at the link. 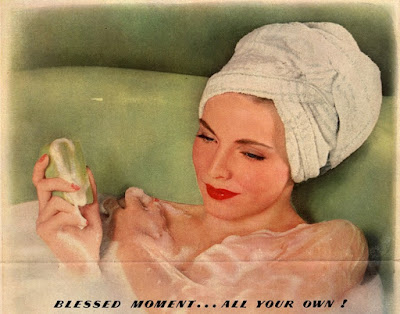 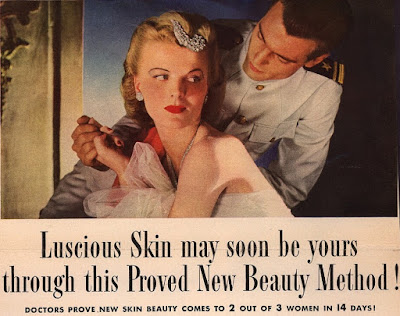 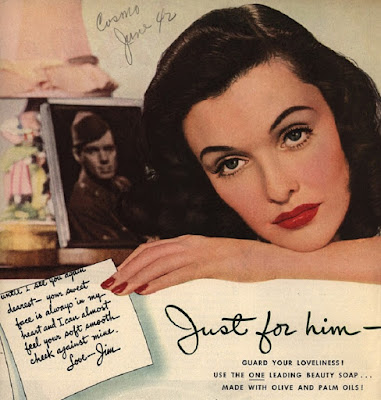 Read more »
Posted by ambisinistral at 9:53 AM 2 comments:

Get ready for a dedicated weekend with Additif s.

Posted by ambisinistral at 6:45 AM No comments:

Email ThisBlogThis!Share to TwitterShare to FacebookShare to Pinterest
Labels: Additif s, For Your Love, Music, TGIF

Juho Könkkölä is a 23 year old Finnish origami artist. The samurai warrior pictured above took him 2 months of planning and a month to fold from a single piece of paper. Below are more pictures of his paper samurai as well as other examples of his work (you can see more at the portfolio page of his website).

The post ends with a video of the steps he took in folding the origami samurai. Enjoy. 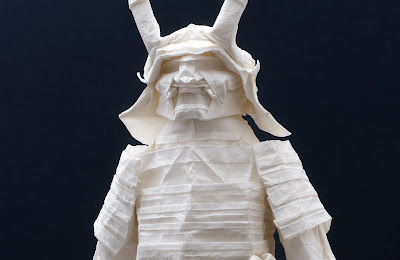 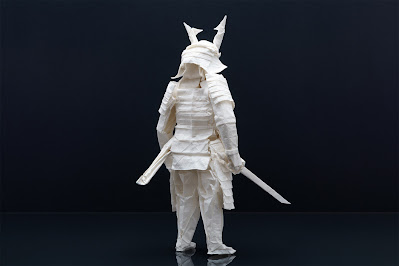 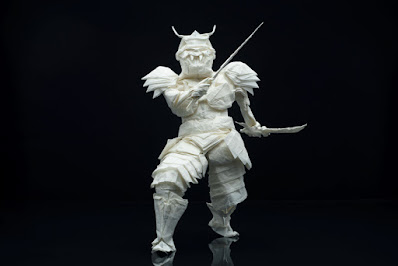 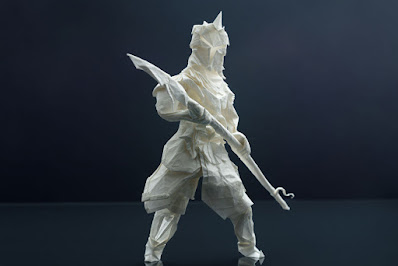 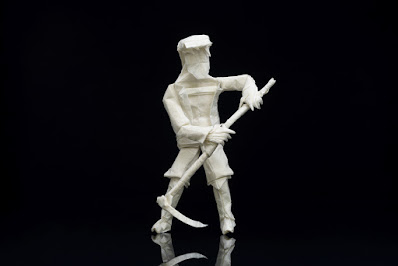 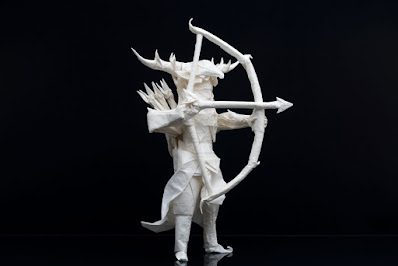 Posted by ambisinistral at 11:39 AM 2 comments:

Cossack sword dancing started out as a pantomime of fights in battles. It has evolved into showing off as you dance around while twirling swords. Above is a collection of various people doing a sword dance. I wonder what an American helicopter mom would think of their tyke swinging swords around like the lad in the video.

Below is a video by Evgeny Kolot, a Cossack martial arts instructor demonstrating a sword dance in slow motion. It is nicely filmed and rather hypnotic. There are other good videos on his channel.

Posted by ambisinistral at 1:52 PM No comments:

Get ready for a short end of the stick weekend with Sharon Little and Tim Sonnefeld. 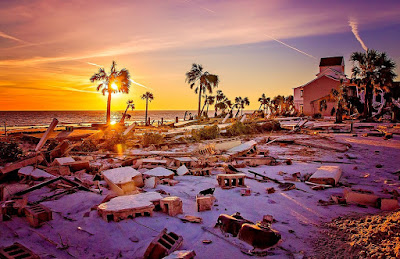 A stagecoach passed by on the road and went on;
And the road didn’t become more beautiful or even more ugly.
That’s human action on the outside world.
We take nothing away and we put nothing back, we pass by and we forget;
And the sun is always punctual every day.

Posted by ambisinistral at 9:19 AM No comments:

Converting sound into an image via an eidophone

Megan Watts Hughes was a 19th Century Welsh singer and scientist. She developed a machine she called an Eidophone which allowed her to create graphic captures of her singing notes by disturbing particles on a membrane. Some of the pictures are very striking.

These are taken from the Public Domain Review's post Picturing a Voice. There are more examples at the link, as well as a discussion of her eidophone and other early attempts to visually capture sound. 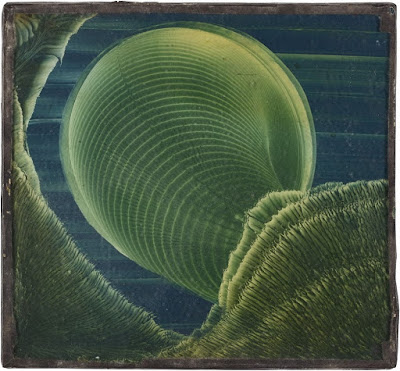 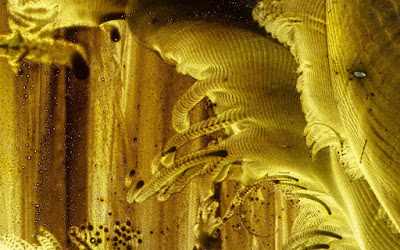 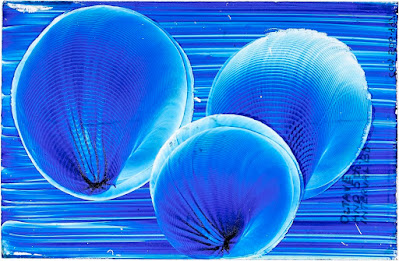 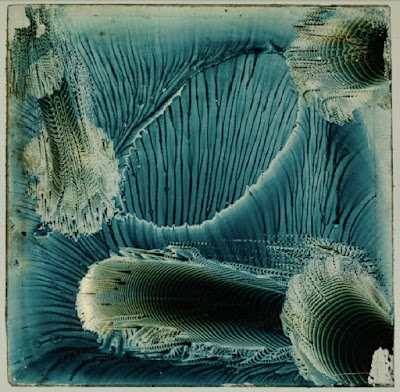 Posted by ambisinistral at 12:15 PM No comments:

All Along the Watchtower

Get ready for a subverted weekend with Lazer Lloyd.

Email ThisBlogThis!Share to TwitterShare to FacebookShare to Pinterest
Labels: All Along the Watchtower, Lazer Lloyd, Music, TGIF

These videos are of Polin, a young Cambodian woman, cooking various meals. No recipes are offered, just shots of her gathering some ingredients and preparing the food. This is a style you see in a certain genre of cooking videos -- no dialog and an emphasis on traditional living with pretty scenery mixed in.

A while back I posted Cooking snake soup, which was a video of two Cambodian sisters in the same style (I think one of them was Polin). In the comments to that post I mentioned some of these Vlogs had gotten in trouble for cooking endangered animals. Polin is connected to these dodgier Vlogs. From a Coconuts Bangkok article:

Our first-hand introduction to the world of primitive tech videos took place on an enormous resin plantation, about two-and-a-half hours outside Phnom Penh.

The set was in the back of an expansive, well-kept property just meters from the shore of the Mekong. There we found a house fashioned from wooden rods with a thatched roof. Inside, it was completely empty – a prop.

There was a small pond and a pen for the ducks, but both were empty as the ducks were being kept at the couple’s real home. Three fighting cocks sat in wooden cages —  though it was unclear if they were destined to be part of a production.

Huong Raty, the producer of NLTV, was wearing pressed slacks and a Lacoste shirt when he came out to greet us. The 31-year-old had a gold ring, a nice watch, and carefully styled hair. His wife, Touch Polin, in contrast, arrived wearing traditional Cambodian clothes, her outfit for that day’s shoot.

The video they were shooting during our visit, Cooking Cassava with Coconut Milk in My Village would be uploaded the next day, not to NLTV but to another channel they produce, one called Polin Lifestyle (PL) channel.

The production set-up was simple but professional. Shot on a tripod with an SLR, they worked with the efficiency of a crew that clearly produced these videos on a near-daily basis.

Polin slowly and deliberately cut and stripped a cassava root while being given instructions by her husband off-screen. When the camera stopped filming, she retired to the shade of the house while two men came to the table to quickly slice up what was left.

The full video, which shows Polin arriving on a riverbank in a boat, digging up the cassava roots, then later cooking them with coconut milk, follows the basic tenets of other primitive technology-type videos. There’s no talking, no background music, a lot of long shots, and plenty of repetitive action. There is a calming effect to watching it, much in contrast to the frenzied eating seen in the videos produced by PTKH and similar channels.

Not all of their videos are as innocuous, however. The top videos on their main channel, NLTV, mostly focus on Polin, sometimes accompanied by other women, cooking and eating large game (the videos that allegedly featured protected animals have been deleted from their channel).

Unmentioned in the above article, to me the videos at the Polin Lifestyle YouTube channel are closer to the Chinese Vlogger Li ZiQi (my post about her is Homemade wheat beer and crayfish)

Below are a couple more Polin's videos, with no endangered species in either. In the first she makes a white radish curry and a fish stew, in the second she goes to a beekeeper and gets some honey, which she uses to make a honey glazed grilled chicken.

Posted by ambisinistral at 11:58 AM No comments:

Zhou Yi is a Chinese patissier who has earned the tile of 'Sugar King' due to his intricate and beautiful fondant cake icings. These examples of his work are from the Veri-art post Zhou Yi - "Incredibly Detailed And Beautiful Handmade Cake". There are more after the jump, and many more at the link. 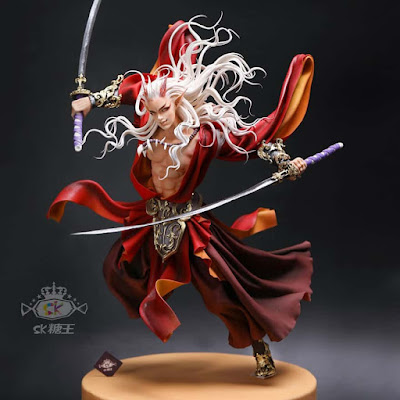 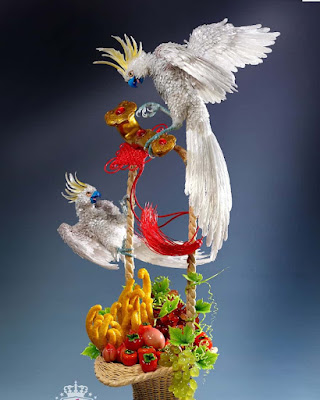 Read more »
Posted by ambisinistral at 11:56 AM No comments: