Yea... the happy looking scarecrow monster is an unfortunate development for her, but what I'm really wondering is why a damsel would go pumpkin gathering in high heels in the first place? Anyway, Happy Halloween.

Posted by ambisinistral at 12:00 AM 4 comments:

Email ThisBlogThis!Share to TwitterShare to FacebookShare to Pinterest
Labels: Halloween

Get reading for an unearthly Halloween weekend with Everette featuring Angie K.

Posted by ambisinistral at 8:05 AM No comments:

The worst place on earth

A quick tour of the steel mill in the BaoGang Steel and Rare Earth Complex in Baotou, Inner Mongolia. Looks like a delightful place to work.

Posted by ambisinistral at 12:35 PM 2 comments:

Airplanes vs apples - which will triumph?

Posted by ambisinistral at 8:04 AM No comments:

If you blink, you might miss it. You might miss the wet floor at the threshold, symbolically cleansing you before the meal begins. You might overlook the flower arrangement in the corner, a spare expression of the passing season. You might miss the scroll on the wall drawn with a single unbroken line, signaling the infinite continuity of nature. You might not detect the gentle current of young ginger rippling through the dashi, the extra sheet of Hokkaido kelp in the soup, the mochi that is made to look like a cherry blossom at midnight.

Get ready for a pertinacious weekend with Low Roar.

Posted by ambisinistral at 7:12 AM No comments:

I don't do YouTube so my clickbait is purely the title I give my posts. Mine tend to be straight forward, but some, like Updated People, give much less of a clear idea of what the post is about. However, considering my modest traffic I don't think that matters much -- for Flares noticeable bumps in traffic come from links, Instagram (a lot of my pictures get posted there) and off and on from Facebook (although I see the traffic from there, I don't see which post the traffic is going to).

Also, occasionally an older post will get a bump, presumably from a link somewhere, but the limited traffic analysis tools I have don't allow me to see where it comes from. Regardless, I don't chase traffic, so while its nice to get the odd bumps here and there, it doesn't really matter much to me. Certainly not enough to test different titles and what-not.

Posted by ambisinistral at 10:59 AM No comments:

The old-timey movie going experience was more elaborate than today's trip to the multiplex (assuming people even bother going to movie theaters in these days of streaming services). It was full night of entertainment, with a feature film, a B film, newsreels and cartoon shorts.

All were advertised to bring in viewers. Cartoons were a popular part of the package and these are posters of some of the cartoons of the day. These examples, and those after the jump, are from 100 Years of Movie Posters category Cartoon Shorts 1928-1964. There are many more examples at that link. 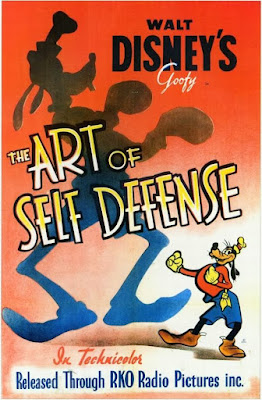 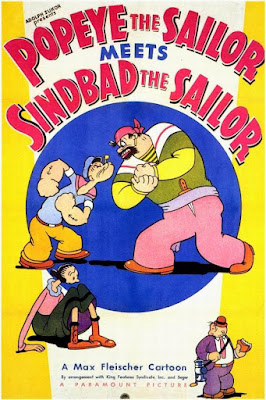 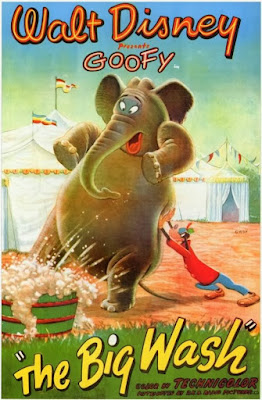 Read more »
Posted by ambisinistral at 6:58 AM No comments:

Get ready for a credulous weekend with Martin Miller and Paul Gilbert.

Posted by ambisinistral at 6:49 AM 2 comments:

These are three videos of meals served to some fellows building a wood house in Azerbaijan. They are in order of how far along the house construction is, not in order of the time of day the meals are served. The lunch looked delicious; chicken breast stuffed with potatoes, peppers and carrots with cheese melted on top.

The videos are done in a common style of a type of cooking video. They rely on no narration, sparse captioning, ambient sound and an emphasis on simple rural life. I am always a sucker for this type of video.

Posted by ambisinistral at 6:37 AM 2 comments:

The meaning of Christopher Columbus' voyages

When talking about Columbus Day, and Christopher Columbus in general, many people try to deride his accomplishments with the rejoinder, which they think is clever, that Columbus didn't discover the Americas because the Amer-Indians had found it long ago. That's all good, well and mundanely obvious, but Columbus' feat was never that he was the first man to step foot on the soil of the Americas.

In fact, Columbus was looking for a trading route to the Spice Islands (the Moluccas of Indonesia). He was to fail at that, the Portuguese pushing down Africa to round the Cape were the winners in that race. However his explorations were ultimately far more important than rounding the Cape because his voyages led to the connection of the two hemispheres. The world changed from an academic's sphere to a physical globe on which the oceans were routes to all its lands.

Consider this short passage from the Bill of Rights' article Henry Hudson and Exploration:

In early July, the Halve Maen reached Newfoundland, where Hudson and his crew encountered a French fishing fleet hauling in cod. The sailors aboard the Dutch ship caught and salted dozens of cod for their journey, and Hudson eventually plied the officers of another French vessel for information about the coast. The Halve Maen also made contact with Native Americans in or near Nova Scotia; Hudson traded knives, kettles, clothing, and beads for beaver skins and other furs. He heard tales of gold and silver, and possibly the Northwest Passage. However, because his men feared the Native Americans had stolen items from the ship, they went ashore and raided the native village. It was an ominous start to Hudson’s relationship with the indigenous people of North America.

Hudson's voyage was in 1609, or just a little over 100 years after Columbus first set out to sail to Asia and already even French fisherman were making the journey. The Old and New Worlds were becoming entangled through commerce, trade and colonization. The process was to be a difficult one -- with errors and cruelty on both sides as well as winners and losers.

Still the World is a richer place because of Columbus' accidental discovery of a wider world as he searched for a quicker trade route to the Spice Islands. That is the legacy of his travels, and it is of such consequence that it is well worth remembering.

Posted by ambisinistral at 2:00 AM No comments:

Email ThisBlogThis!Share to TwitterShare to FacebookShare to Pinterest
Labels: Henry Hudson and Exploration

Mr. Wong owns a small shoe factory in Serdang, Malaysia. He makes steel-toed work shoes that are mainly sold in Singapore. The video is not translated, but has some captions explaining the process.

Posted by ambisinistral at 12:21 PM No comments:

Has anyone ever written anything for you

Get ready for a reflective weekend with Adja.

Posted by ambisinistral at 6:33 AM No comments:

Email ThisBlogThis!Share to TwitterShare to FacebookShare to Pinterest
Labels: Adja, Has anyone ever written anything for you, Music, TGIF

Becca Saladin is an artist who uses photoshop to convert paintings and sculptures of people into more modern versions of them. Above is a video of many of her works.

She adds contemporary clothing, hairstyle and makeup to the people. Regular readers will know that I am interested by old paintings and pictures, and her modernization of old timey people is fascinating. It shows them in a whole different, and much more relatable, light.

Below are some of her pictures from around the web. You can see more at her website RoyaltyNow. You can buy prints of her work and also commission her to restore old family photographs. As she says at her site:

Working full-time as a corporate Graphic Designer on marketing collateral, my outside-of-work passions have always been art and history. Like most people, I’m so intrigued by history, yet always felt separated from the figures, likely because it’s difficult to relate to a stiff, formal portrait of a monarch. In early 2018, I created an Instagram account to share my hobby of transforming old portraits into lifelike modern-day images with fellow art and history enthusiasts. Since then, I’ve been able to expand Royalty Now to Tik Tok, YouTube & Etsy. It’s also expanded into different versions of my work - creating custom renaissance portraits for clients, retouching and colorizing old photographs, bringing an old family relative into the modern-day, and more.

Posted by ambisinistral at 10:15 AM 4 comments:

Howard Phipps is a British artist who specializes in wood engraving. His works hang in several museums. Along with his woodblock prints he also does watercolors, etchings and illustrations.

He was born in Wales, but now lives near Salisbury in the south of England where he draws inspiration from the nearby Wiltshire and Dorset downs. He does landscapes and interior scenes. As it says in his biographical information on his website:

Much of Howards art is rooted in the downs of Wiltshire and Dorset, with their deep coombes and Beech clumps. He works from drawings and watercolours made on location, using light to reveal the underlying sculptural form of the landscape. Ancient trackways and striking hill forms draw his eye – timeless places on which earlier generations have left their mark. His subsequent wood engravings are profoundly imbued with a sense of place.

This is a small sample of his prints taken from his website. There are many more examples of his work at that site. As you can see in the above example, he does colored prints as well as black and white ones. If your interested in acquiring one, his works are affordable, most in the vicinity of $300. 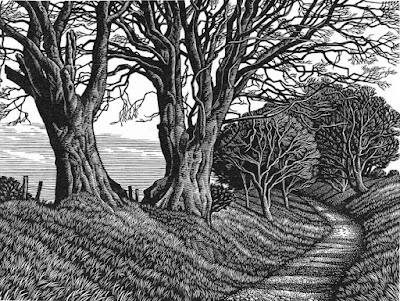 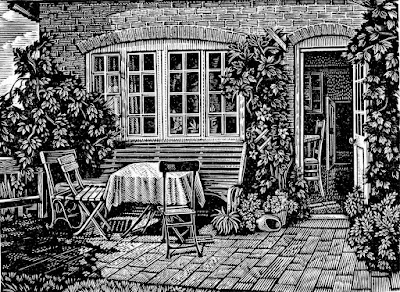 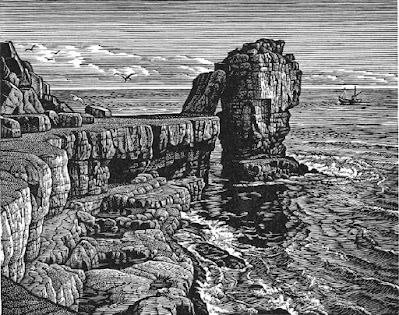 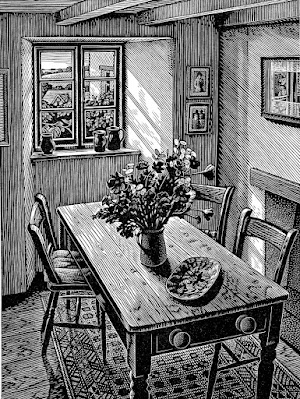 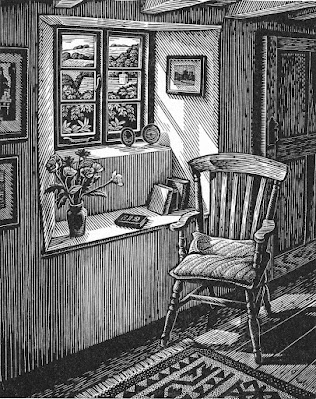 Posted by ambisinistral at 9:56 AM No comments:

Get ready for a vagabond weekend with Ólöf and Klara Arnalds.

Posted by ambisinistral at 5:55 AM No comments: