Posted by ambisinistral at 11:28 AM No comments: 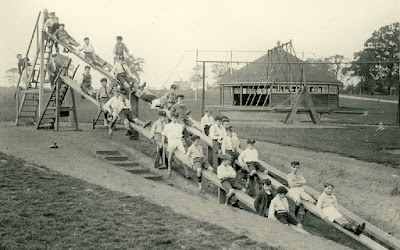 In the early 20th century Charles Wicksteed owned a company that made drills, saws and gearboxes. In 1921, to celebrate the end of WWI, he took pipes from his factory and used them to build swings in a park in Kettering, England.

A year later he introduced the world's first playground slide to the park. It stood 12 feet tall and featured polished boards that could be slid down.

Wicksteed's playgrounds were a success, and he spun off a company Wicksteed Playscapes to design and build playgrounds. That company is still in business, easily making it the oldest company in the world dedicated to creating playgrounds. In the words of Charles Wicksteed:


I came to the conclusion the great mistake so many private benefactors and public bodies make is this: they lay out a beautiful Park to sit in, and look at, but they do not realise that the people want more than this, they want something doing. And those who cannot play themselves, enjoy looking at those who can. The Play Ground should not be put in a corner behind railings, but in a conspicuous and beautiful part of a Park, free to all, where people can enjoy the play and charming scenery at the same time; where mothers can sit, while they are looking on and caring for their children.

My Play Ground is not confined to boys or girls, or old or young, it is open to all. I have seen a dozen women of forty years of age on the Plank Swing together, and enjoying it as much as the children. I have also seen old ladies of 80 go down the slides. It is a good thing to have plenty of variety and then no one tires.

I used to be told how boys abused everything and what a disgraceful thing it was for two men to swing together on the same swing. So I made up my mind it would be far easier for me, as an engineer, to make the Playthings so strong that they could not be broken, rather than try to reform the users. In this I have succeeded without disturbing the delicate balance, so that the youngest child alone can operate any of the playthings.

Posted by ambisinistral at 9:48 AM No comments:

We Gotta Get Out of This Place


Get ready for an escapist weekend with Dan Auerbach.

Posted by ambisinistral at 8:59 AM No comments:

Email ThisBlogThis!Share to TwitterShare to FacebookShare to Pinterest
Labels: Dan Auerbach, Music, TGIF, We Gotta Get Out Of This Place

These pictures, and those after the jump, are old drawings of what paleontologists used to think dinosaurs looked like. They tended to be pictured as being dull colored and very lizard like. Today it is believed that they were much more colorful and active. In fact, fossils are now yielding some information on just what those colors were.

The article How do we know what dinosaurs looked like? discusses the evolution of how dinosaurs were pictured through the years. From that article:


When ancient people were faced with strange bones, they did exactly what we do today, and used the best knowledge available to reconstruct the creatures that left them behind. Sometimes this resulted in poor conclusions. The first name assigned in print to any dinosaur remains was the ignominious title of Scrotum humanum – a label given by British physician Richard Brookes to the broken end of a femur in 1763, believing it to be the fossilised testicles of a Biblical giant.

We now know that the leg bone belonged to a Megalosaurus – correctly described as an extinct reptile by William Buckland in 1824. You can’t entirely blame Brookes for his conclusions, as dinosaurs would not be described as a group until 1842. That was when Richard Owen, head of what is now the Natural History Museum, revealed to the world a new class of strange, extinct creatures he called dinosaurs, meaning ‘fearfully great reptiles’. He imagined Iguanodon, Megalosaurus and Hylaeosaurus to be reptiles with legs sprawled out to the sides, with scaly grey or green skin: something like modern lizards or crocodiles.

In 1854 artist Benjamin Waterhouse Hawkins created life-sized sculptures of these animals as directed by Owen, and you can still see these on display in Crystal Palace Park in south London. Visit them and you will see they look very different to how we depict dinosaurs today.

Over time, we have come to completely revise our understanding of the appearance of dinosaurs, and much of this began with the description of another American dromaeosaur called Deinonychus in the 1960s. John Ostrom at Yale University made the revolutionary suggestion that this species was a bird-like, fast, warm-blooded pack hunter, and so began the ‘dinosaur renaissance’ of the 1960s and 70s. Ostrom championed the idea that birds were dinosaurs, and was spectacularly vindicated when Sinosauropteryx, the first known feathered dinosaur, was found in China in 1996. 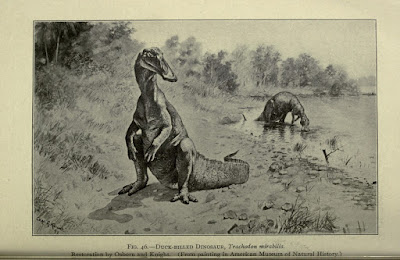 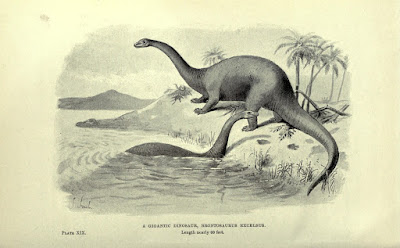 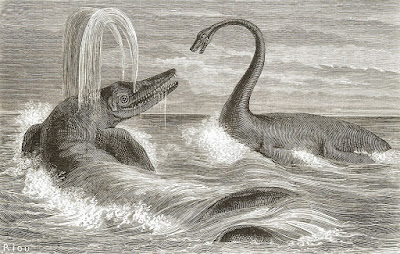 Read more »
Posted by ambisinistral at 8:17 PM No comments:

The ugly side of ice cream

Above is a video of a restored 1944 Dairy Queen ice cream making machine. The behind the scenes machinery of making ice cream is certainly grittier than a brightly lit and colorful ice cream parlor.


Posted by ambisinistral at 3:42 PM No comments:

Wish You Were Here


Get ready for a wistful weekend with Cody Jinks.

He gave us lollies

Nyuju 'Stumpy' Brown was an aboriginal artist from northern Australia. She grew up living in a hunter/gatherer lifestyle and didn't encounter white people until she was a teen. From the video:


"The first time I saw an airplane was down near the stock route. It landed near us. We thought the white people might kill us. We were frightened of the white people so we hid in a wattle tree."

Below are some of her paintings. 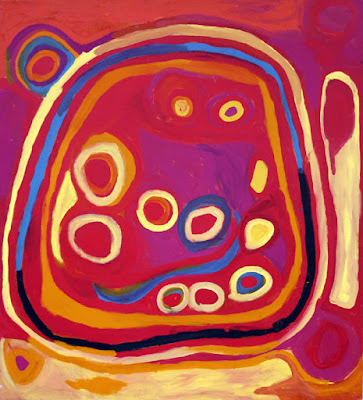 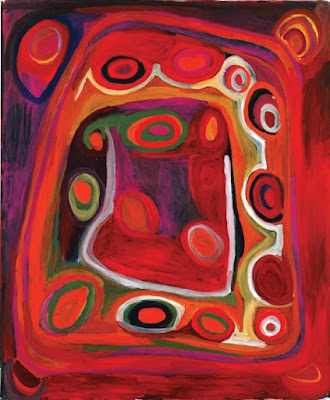 Posted by ambisinistral at 2:05 PM No comments:

There is a point at which the law becomes immoral and unethical. That point is reached when it becomes a cloak for the cowardice that dares not stand up against blatant violations of justice. -- Kurt Huber

Posted by ambisinistral at 9:12 AM No comments:


Get ready for a self-centered and cranky weekend with Frida Snell.

Posted by ambisinistral at 6:09 AM No comments:

I want to see this movie

Above is a review of Night Wars. It appears to be a cinematic tour de force of the first order. Particularly impressive are the scenes where, while sleeping with loaded guns, the protagonists return to Vietnam in their dreams to participate in fire fights.

Posted by ambisinistral at 11:23 AM No comments:

Time for yet another random walking around video. This one is through the streets of Yangon, Myanmar.

While there is no such thing as a connoisseur of walking videos, I've watched enough of them to begin to spot differences in them. In this one I particularly like his camera work. While usually the camera in these things just point ahead, he tends to focus on points of interest, sometimes even turning as he passes them. A nice touch.

Posted by ambisinistral at 10:05 AM No comments:

You Can Never Go Home Again

Get ready for a oddball fusion weekend with Gangstagrass.

Posted by ambisinistral at 7:26 AM No comments:


The illustration is from 1902. It is hard to read, but the kids in the picture are labeled: Philippines, Hawaii, North, Porto Rico, South, Mass., Texas, New York and Alaska, with the black boy bearing no label. The concerned looking lady in the white robes is Peace.

Enjoy the 4th all.

Posted by ambisinistral at 12:30 AM No comments:

Ernst Haeckel was a 19th century German biologist. After the untimely death of his young wife he became fascinated by jellyfish (medusae). Their ethereal and fragile beauty touched a chord in his sorrow.

These samples of his illustrations are from Public Domain Review. There are more after the jump. 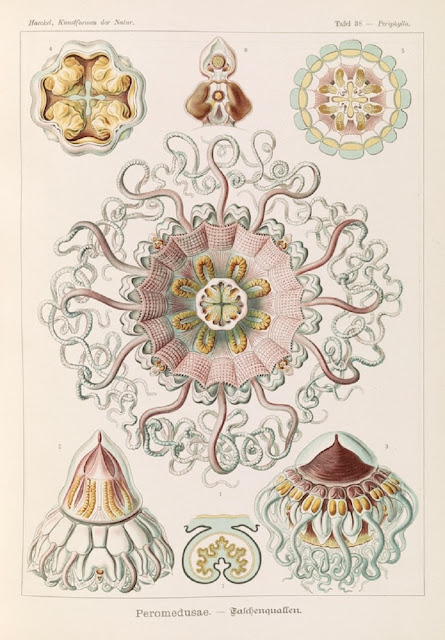 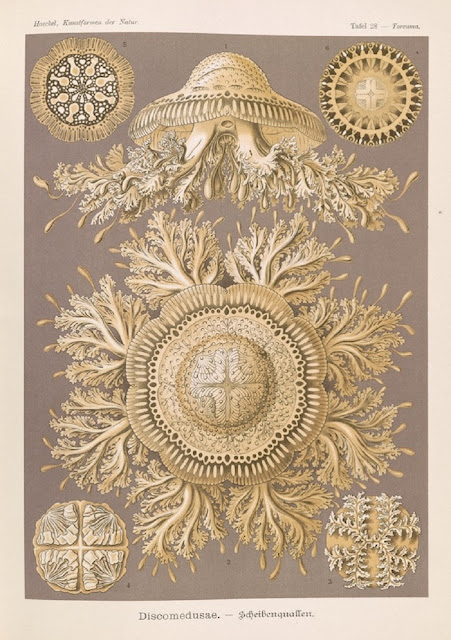 Read more »
Posted by ambisinistral at 2:31 PM No comments: