Worth less than a parrot

My heart leaps up -- William Wordsworth

The Child is father of the Man;
And I could wish my days to be
Bound each to each by natural piety …

Posted by ambisinistral at 7:35 AM No comments:

The above video is an old cowboy sitting in a field in the late afternoon, smoking a cigar and telling stories about smoking cigars. His stories are entertaining: as an out-of-place, young, poorly trained, sort of a police officer in a small Alaskan village, as a ranch hand later, and just visiting a cigar lounge. Well worth your time.

His name is Dewayne and he runs a YouTube channel (and a school by the same name) called Dry Creek Wrangler School. Most of his videos involve horse handling or ranching, but he does branch out from time to time. Me being me, below are a couple of his food related videos. The first is breakfast over a campfire and the second is percolated coffee. Man, I haven't had percolated coffee in decades.

Posted by ambisinistral at 11:55 AM No comments:

Get ready for an acidic weekend with Fools Garden.

Posted by ambisinistral at 10:18 AM No comments:

The staff of life revisited

Below is an excerpt from an old post of mine, The staff of life. It was discussing wheat rust, a disease that greatly reduced crop yields and how that might affect countries with poor food sufficiency. I ended it with the following:

Which brings us to Jimmy Carter in a 'round about sort of a way. While touring North Korea he had the following to say about that country's growing famine:

"One of the most important human rights is to have food to eat, and for South Korea and the US and others to deliberately withhold food aid to the North Korean people is really a human rights violation."

That comment raised a lot of eyebrows, but it shouldn't have been that surprising. The UN, through its Human Rights Council and various Progressive NGOs, has long been banging the drum for Food Justice, sometimes framed as Food as a Human Right.

This is a movement that encompasses the usual bugaboos: climate change (so arability rather than farming practices becomes the culprit for food shortages), sustainable farming, organic farming, cultural diversity, GM food, corporations, exploitation, oppression and lately the much touted obesity epidemic.

They make no bones about the fact that they want to change, from seed to table, which foods are grown and how and to who they are distributed.

Make no mistake, if the Middle East does slide towards famine there will be loud voices, accompanied by pictures of big eyed children with empty food bowls, blaming it all on Western capitalism and demanding free food from the same Capitalists as payment of a fine for their guilt. How that will play with grocery prices going up is easy to imagine, but the agitation will be there none-the-less.

The impact of the Ukranian war on World food supplies will be significant. At best food prices will greatly increase, at worst some regions may slide into famine. All will be affected. This will lead to major food exporters having to take up the slack as best as possible.

I expect that there will be many voices clamoring for a say in how food is to be distributed. Some will be arguing for a realpolitik approach, but I think there will be a loud contingent arguing for Food Justice. As I said in that earlier post, "They make no bones about the fact that they want to change, from seed to table, which foods are grown and how and to who they are distributed".

Never leave a good crisis go to waste. It bears careful watching as to how this debate will unfold. There will be many motives in play and much mischief possible.

Posted by ambisinistral at 8:14 PM No comments:

Cigarette companies used to include trading cards with their packages. These samples, and a few from a chocolate company, are of cards featuring the Boy Scouts and Girl Guides (present day Girl Scouts) of the day.

The two organizations featured good citizenship rules and healthy outdoor living. Of course, to modern values a cigarette company being connected to scouting would be off limits. Aside from that, some of the Boy and Girl Scout activities -- boxing, marksmanship, girls doing laundry and so forth -- would also be frowned upon in certain circles.

Still, it was a different time, and these cards are an interesting look back at how Scouts were once viewed. These images and those after the jump are from the Flikr album Boy Scouts & Girl Guides which has many more examples of the cards. 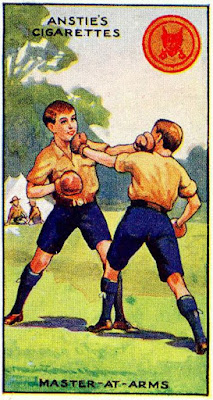 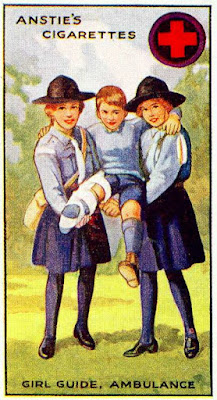 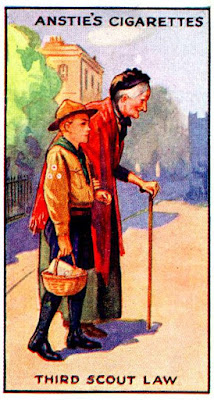 Read more »
Posted by ambisinistral at 11:44 AM No comments:

This is a long video, but a very good one. It is film from a 4 masted barque the Peking rounding Cape Horn in 1928. It was filmed by Irving Johnson who was a novice sailor on the trip. He eventually owned and was Master on three his own ships.

His narrated film shows storms as well as life aboard the Peking. The shots up in the rigging are amazing. Definitely no soy boys on that vessel.

Posted by ambisinistral at 1:19 PM No comments:

I've Got You Under My Skin

Get ready for a sub-epidermis weekend with Ben l'Oncle Soul.

Posted by ambisinistral at 7:56 AM No comments:

Email ThisBlogThis!Share to TwitterShare to FacebookShare to Pinterest
Labels: Ben l'Oncle Soul, I've Got You Under My Skin, Music, TGIF

Jean-François Millet was a 19th century French artist. He was the son of farmers, but made it to Cherbourg and then Paris to study art. He started his career as a portrait painter, but eventually moved on to paint rural themed works. He deviated from the romantic rustic style that was popular and focused on the life of peasants, which he was familiar with from his youth on the farm.

He was a member of the Barbizon school of landscape painting. He differed from most the others in that group by including people and their activities in many of his paintings. His representations of the common man led some to charge him with being a socialist sympathizer, but such controversy was minor and didn't affect his popularity and influence. 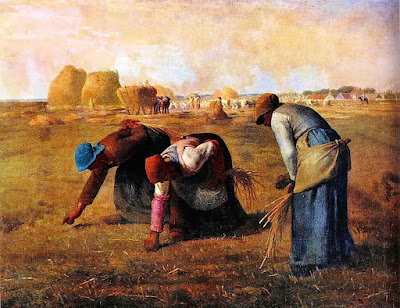 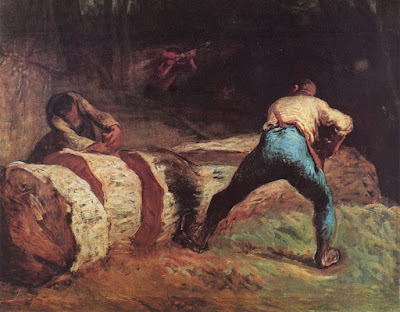 Read more »
Posted by ambisinistral at 8:10 AM No comments:

Operating a lock on an English canal

In my post On a fuel boat in an English canal I was interested in the rather simple means used to operate the locks in the canals. The above video gives a clear explanation as to how those locks are operated by boaters on the canal.

Posted by ambisinistral at 9:08 AM No comments:

Just The Two of Us

Get ready for a dyadic weekend with Adikara Fardy.

Posted by ambisinistral at 10:55 AM No comments:

Email ThisBlogThis!Share to TwitterShare to FacebookShare to Pinterest
Labels: Adikara Fardy, Just The Two of Us, Music, TGIF

I forgot I even had this video bookmarked. I had been holding it in reserve in case I ever got desperate for a TGIF music video. I have no idea what to make of it, between dancing soldiers, rocket barrages and tanks tipping over it is a bit of a mixed message to say the least (or maybe it's not mixed at all if you're familiar with the milieu it came from). From the Wikipedia article that discussed XS Project, the folks who made this video:

In 2010, XS Project, a group of four music producers from Saint Petersburg, released yet another satirical movie on YouTube, together with radio presenters of Gop FM station, accompanying their Bochka, Bass, Kolbasyor (Kick drum, bass and kolbasyor) track, which was released in 2003. In a movie, several artists, DJs and radio presenters, disguised as gopniks, danced in gopnik style on a Saint Petersburg children playground. The movie was intended to mock the so-called subculture of rave gopniks - young people in tracksuits who would go to rave parties in Russia not to have good time, but to get trashed and cause trouble. The mockery was in lyrics, who called for sober and healthy lifestyle, contrary to way rave gopniks lived. However, street youth in Eastern Europe liked the video and preferred to eschew the irony, and, given the rise of sober right-wing lifestyle in Russia around that time, the dancing moves showcased in the movie became basis of a long-lasting series of flash mobs akin to Harlem Shake meme of the time, when young people in verious cities of Eastern Europe were starting to dance, all of sudden, in gopnik style in the middle of public areas outside.

Some commentators in Slavic countries of the European Union at first considered these flash mobs to be serious manifestation of the right-wing propaganda, especially given the lyrics in the song, saying "We bring hardbass to your home, 1 4 8 8", with "1 4 8 8" being a neo-Nazi lingo for "Fourteen words" and Hitler salute. However, experts quickly grasped that the usage was ironic, and that the hardbass crowds consisted mostly of football hooligans and bored teenagers, rather than of actual neo-Nazis. Neo-Nazis around that times also dismissed the connection to hardbass, blaming it on left-wing and anarchist circles instead. However, commentators still identified some right-wing sympatizers in the hardbass attacks, but, according to Miroslav Mares, an expert in far-right extremism from Brno Masaryk University, the influence of hardbass attacks on public opinion was negligible.

Posted by ambisinistral at 11:55 AM 2 comments:

On a fuel boat in an English canal

I never knew about the narrowboats on the English channels. Interesting lifestyle. I also found the simplicity of the locks to be interesting -- some old technological solutions still being used. The video is narrated.

Posted by ambisinistral at 7:24 AM 2 comments:

“Good morning.
Today of all days, the flurries are cold.”
“How are you going to stand this winter?”
“Will you bloom again next year?”

Posted by ambisinistral at 5:06 AM No comments:

Get ready for a negatory weekend with Max & Nicky.

Posted by ambisinistral at 6:48 AM No comments:

Email ThisBlogThis!Share to TwitterShare to FacebookShare to Pinterest
Labels: Max & Nicky, Music, Tell Her No, TGIF

Today we tour a harmonica factory in South Korea. Harmonica building is more complex than you might first think. It's a precise process to get all of the reeds tuned properly. As tone deaf as I am, I would probably end up sweeping the floor if I got hired to work there.

In case you're fascinated by the humble harmonica, previously on Flares there have been three other posts with/about harmonicas:

Finally, I'll end with a clip of Buddy Greene, a harmonica virtuosa, playing at Carnegie Hall. It is really quite amazing how good it can sound.
Posted by ambisinistral at 11:37 AM No comments: