It used to be used to fight fires in Canada, but it is now retired. It is the World's largest flying boat.

Posted by ambisinistral at 4:15 PM No comments:

Email ThisBlogThis!Share to TwitterShare to FacebookShare to Pinterest
Labels: airplanes

Not exactly self-portraits, but close enough. These pictures, and those after the jump, are a series of photographs of old-timey photographers, some posed and some of them candid. They are from La boite verte's post Des photographes à l’ancienne. There are many more examples at the link. 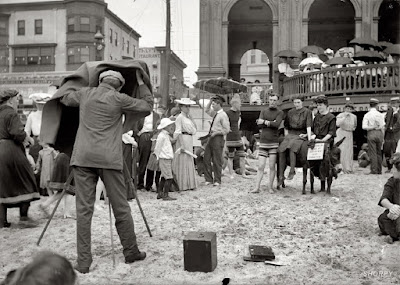 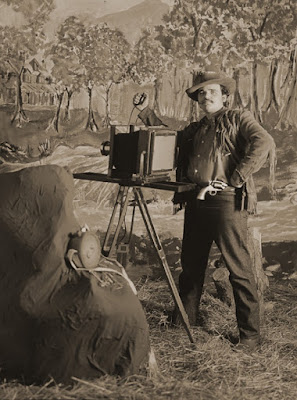 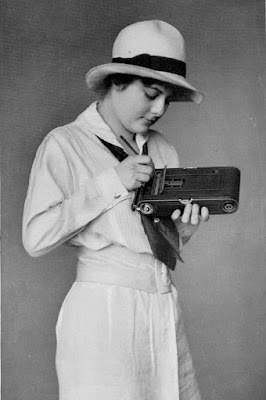 Read more »
Posted by ambisinistral at 9:00 AM No comments:


Get ready for an unrequited weekend with Brian Justin Crum.

A small market in rural Laos

Usually the walking videos I post are in cities, this one is a tour of a small market in rural Laos. It occupies a short stretch of a dirt road and is very basic, but it does seem well stocked with food, as well as having some clothes and other commonly needed items. I suspect a lot of the women buy the food for their meals on a daily basis at a market like this.

The Jet Propulsion Laboratory has posted Visions of the Future, which contains a number of hypothetical posters for space tourism. To those of us of a certain age it is just a reminder of the sorry follow-up to Apollo. Ah, what might have been.

Anyway, this is their blurb for the posters:


Imagination is our window into the future. At NASA/JPL we strive to be bold in advancing the edge of possibility so that someday, with the help of new generations of innovators and explorers, these visions of the future can become a reality. As you look through these images of imaginative travel destinations, remember that you can be an architect of the future.

There are more posters after the jump, and a few more. as well as more information and larger size downloads, at the JPL link. 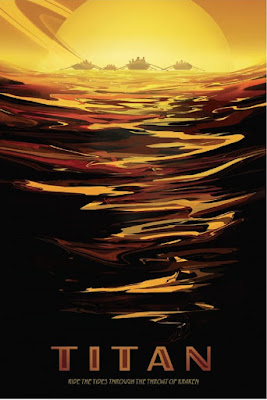 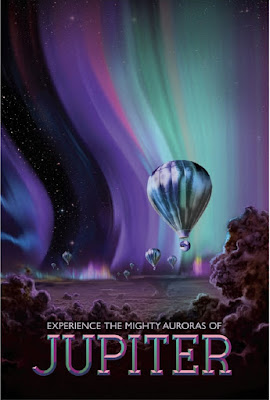 Read more »
Posted by ambisinistral at 7:42 PM No comments:

The above video is from Li ZiQi, an extremely popular Chinese 'Oriental Lifestyle Foodie', making wheat beer and eventually cooking a meal of crayfish and enjoying the beer. Her videos are very beautifully filmed and well edited.

She has a carefully curated image as a young Chinese girl living a simple rural life and demonstrating traditional cooking and crafts. From her About page on her online store:


[Li ZiQi is] a girl who lives in the mountains and forests in the village of northwestern Pingwu, Mianyang City, Sichuan Province, China.

Li Ziqi didn't own happy childhood. When she was a child, her parents got divorced and her father died early. She started living with her grandparents. Their life was poor but affordable. Li Ziqi's grandfather was a cook in the village. When there was a ceremony going on, such as a wedding or a funeral, her grandfather would be in charge.

In her videos, she shows how to cook various dishes, which she had learned from her grandfather. Besides cooking, she also learned how to make bamboo baskets, grow vegetables, and make carpenter handiworks.

Li Ziqi's works convey a positive attitude toward life. Ziqi's videos can help people fulfill the "dreams of the countryside."

These are the dreams of many people at home and abroad, especially Chinese people. Many people show great interest in Li Ziqi clothing. In front of the camera, she always appears in a set of Chinese Han clothing which is made in rough fabric.

Also, her videos help more people learn and understand Chinese traditions and culture. The spirit of struggling for independence and self-reliance conveyed by her life experience has attracted great attention at home and abroad.

Additional information, including biographical information and a brief interview of Li ZiQi, can be found at Li ZiQi - A Modern Chinese Fairy.

Posted by ambisinistral at 8:35 PM No comments:


Get ready to cut a rug this weekend with Los Colorados.

Email ThisBlogThis!Share to TwitterShare to FacebookShare to Pinterest
Labels: Los Colorados, Music, TGIF, What I Like About You

In 1903 Tsar Nicholas II, to celebrate the 290 anniversary of the Romanov dynasty, hosted a costume dress ball in the Winter place in St Petersburg. These pictures from that ball were colorized by Olga Shirnina and they certainly are beautiful. Of course the ball occurred in the sunset of an Age, in 15 years it would be swept away.

These pictures, and those after the jump, are from the vintage News post Dazzling Color Photos of the Legendary Romanov Costume Ball of 1903 which has more of the colorized photos, as well as a number of black and white ones. Enjoy. 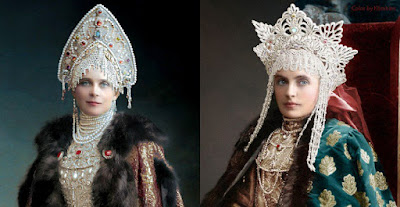 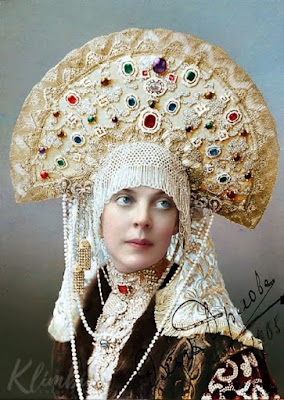 Read more »
Posted by ambisinistral at 3:34 PM No comments:

"What did you do at work today?" "I pulled over a submarine."

Above is a video of the Coast Guard cutter Munro boarding and seizing a semi-submersible drug carrying submarine in the Pacific. I originally saw the video at Borderland Beat.

The title of the post is from plixplop in the comments to the video.

Posted by ambisinistral at 11:51 AM No comments:

This is a post that adds a couple of new links to Flares. When looking for a graphic to illustrate it I searched on 'chain links' (I guess if nothing else I'm hopelessly cliché). Anyway, I found the above image of a fellow riding his Hornsby Chain Track Tractor.  If you're interested, The Old Motor has a post with information about them -- The 1908 Hornsby Chain Track Tractor.

As for the new links, under 'Recommended' in the far right column I've added:

Posted by ambisinistral at 11:35 AM No comments:


Get ready to throw in the towel this weekend with A Great Big World featuring Veronica Ballestrini.

Posted by ambisinistral at 7:55 AM No comments:

Preparing to restore a Rembrandt

From their press release:


On 8 July 2019 the Rijksmuseum starts Operation Night Watch. It will be the biggest and most wide-ranging research and conservation project in the history of Rembrandt’s masterpiece. The goal of Operation Night Watch is the long-term preservation of the painting. The entire operation will take place in a specially designed glass chamber so the visiting public can watch.

Never before has such a wide-ranging and thorough investigation been made of the condition of The Night Watch. The latest and most advanced research techniques will be used, ranging from digital imaging and scientific and technical research, to computer science and artificial intelligence. The research will lead to a better understanding of the painting’s original appearance and current state, and provide insight into the many changes that The Night Watch has undergone over the course of the last four centuries. The outcome of the research will be a treatment plan that will form the basis for the restoration of the painting.

These pictures are from the site Photogrammar which is an archive of photos taken between 1935 to 1945 by the United States Farm Security Administration and Office of War Information.

The site has an interactive map. I randomly clicked on a box inside of the map and got pictures from 1939 which were taken in Sheridan County, Kansas. It looks like it was a hardscrabble life, but I've read that, during the Great Depression things were generally better on farms than in the city, so maybe they considered themselves lucky.

Enjoy these pictures, and those after the jump. Of course there are many, many more at the link. 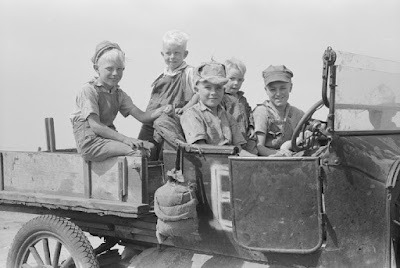 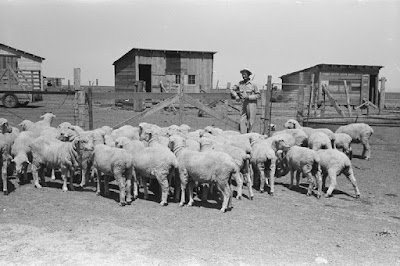 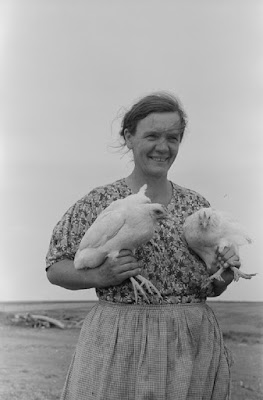 Read more »
Posted by ambisinistral at 7:03 PM No comments:

This video is from the YouTube channel Rural Life. She's grilling chicken in this video, in her other videos the young lady demonstrated a variety of Cambodian recipes and dishes.

Posted by ambisinistral at 1:15 PM No comments:


Get ready for an emancipated weekend with The Big Push.

Posted by ambisinistral at 5:56 AM No comments:

Email ThisBlogThis!Share to TwitterShare to FacebookShare to Pinterest
Labels: Music, Nina Simone, TGIF, The Big Push, Trouble so Hard, Wade in the Water

We hold these truths to be self-evident, that all men are created equal, that they are endowed by their Creator with certain unalienable Rights, that among these are Life, Liberty and the pursuit of Happiness.

As always, may our self-proclaimed betters choke on those words. Happy 4th of July my fellow citizens. Enjoy the BBQs, festivities and fireworks.
Posted by ambisinistral at 4:52 AM No comments:

The 4th of July brings BBQ grilling to mind. The above video is a review of a robot that cleans the grate of a BBQ grill. The brushes that keep falling off adds a bit of humor to it all. Even on sale these Grillbots cost $90 to $100. Seems like a mighty steep price to do away with your gill brush, but to each his own. You can follow the link if you have a hankering to buy one.

Speaking about robots, I wonder whatever became of The Robotolizer?

Posted by ambisinistral at 5:17 PM No comments: