An encounter in the Kuiper belt

Arrokoth is a small object, measuring 22 miles long by 12 miles wide and 6 miles thick, which orbits in the Kuiper belt beyond the orbit of Neptune. It was discovered while the New Horizons space craft was already in flight. New Horizons was redirected to pass within ~2200 miles of Arrokoth to photograph and measure it.

Arrokoth appears to be two small globular objects that collided at a slow speed and eventually fused together. It is the most distant celestial object yet visited by humans.

Kitchen designs from the late 1940s

In the U.S., at the end of WWII, there was fear that with the winding down of war production the economy might revert to the stagnation of the Great Depression. In fact, with all the returning soldiers and sailors looking for work, there was inflation and a recession in 1946-47. However, the post-war economy soon roared back to life. Part of it was the long pent up desires of the American public, part of it was the effects of the GI Bill (Servicemen's Readjustment Act of 1944) easing the soldiers' transition back into civilian life.

In the post war years, along with a baby boom, came a housing boom thanks to the low cost mortgages provided by the GI Bill. There was also a change in building methods during this period, with much more prefabrication and cookie-cutter design, as any visit to a WWII era suburb will attest.

These images, from Vintage Everyday's 30 Beautiful American Kitchens From the 1940s, show how kitchens for the new homes were imagined and advertised. There are more at the link. 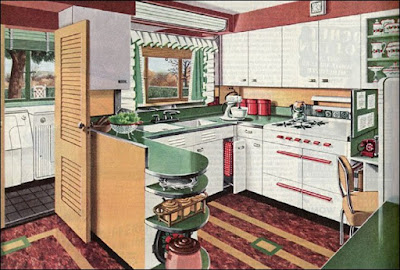 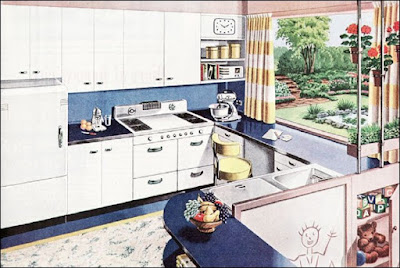 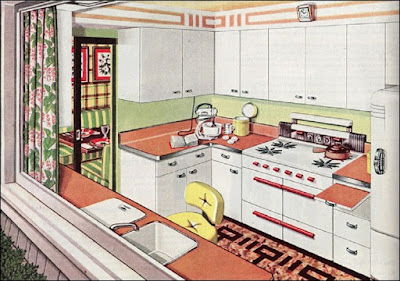 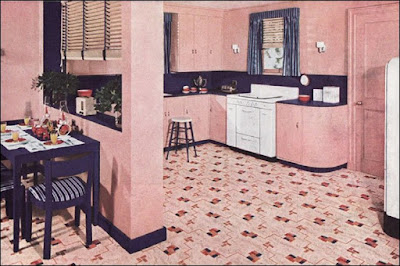 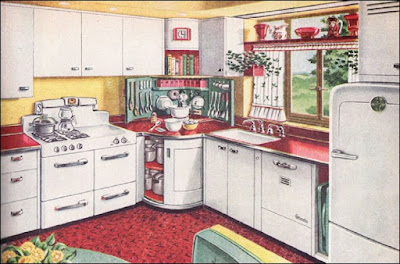 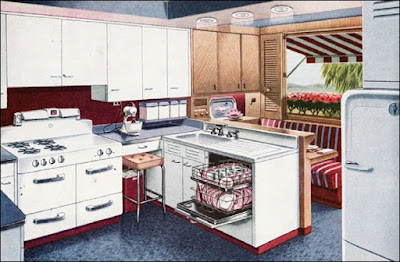 Posted by ambisinistral at 9:08 AM No comments:

Get ready for an inexorable weekend with Pretty Gritty.

These are videos of small, neighborhood udon/soba (noodle) restaurants in Japan. The captions have been translated into English, turn them on to read them.

If you ended up in one of these places, ordering would be an adventure. Once, in Taipei, my wife and I landed in a place with the menu in nothing but Chinese (it didn't have the usual pictures). We just randomly pointed at things on the menu. The waiter looked at us like we were nuts, but a wonderful meal was delivered. We figured he just ignored our pointing and served us something sane instead. Hopefully, that's what these places would do if you dined in one.

The videos are from the YouTube channel Japanese Udon Soba. There are many more there.

Posted by ambisinistral at 8:37 AM No comments:

I am silver and exact. I have no preconceptions.
Whatever I see I swallow immediately
Just as it is, unmisted by love or dislike.
I am not cruel, only truthful‚
The eye of a little god, four-cornered.
Most of the time I meditate on the opposite wall.
It is pink, with speckles. I have looked at it so long
I think it is part of my heart. But it flickers.
Faces and darkness separate us over and over.

Now I am a lake. A woman bends over me,
Searching my reaches for what she really is.
Then she turns to those liars, the candles or the moon.
I see her back, and reflect it faithfully.
She rewards me with tears and an agitation of hands.
I am important to her. She comes and goes.
Each morning it is her face that replaces the darkness.
In me she has drowned a young girl, and in me an old woman
Rises toward her day after day, like a terrible fish.

Posted by ambisinistral at 11:44 AM No comments:

Get ready for a pocket picked weekend with Vocaloid Girls/The Strawberry Feel.

Posted by ambisinistral at 6:50 AM No comments:

These are a series of advertisements made for the Queen City Printing Ink Company at the beginning of the 20th Century. They were done to highlight the companies ink colors and type faces. Their simple and bold design is the work of Augustus L. Jansson who, along with creating ads, was a cartoonist and greeting card designer.

His striking and simple style isn't quite yet Art Deco, but it certainly anticipates it. Many of these images are from his Ink Beasts Parade series of ads.

These works, and those after the jump, are from the Public Domain Review's Augustus Jansson’s Queen City Ink Adverts (1903–1907). There are more at the link. 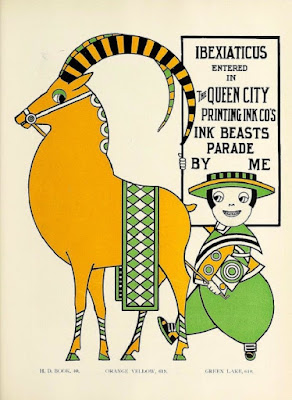 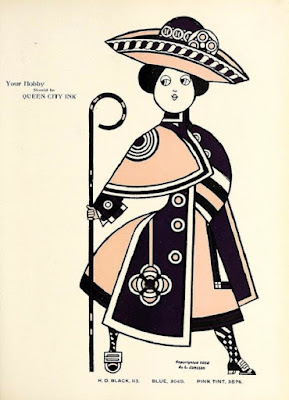 Read more »
Posted by ambisinistral at 6:11 AM No comments:

On the water in Burma

This video starts out in a small market. We then board a water taxi and travel down a river, through a small town where we refuel, and then eventually onto the open waters of a lake. It looks like it would be pleasant day trip.

In my title I called the country Burma, the film-maker called it Myanmar. So which is correct? It is actually been known by both names. The British, during their colonial rule, settled on Burma as its official name. After independence the country's name was changed several times. It was a military junta that changed it to Myanmar, with the US, UK and a few other countries not recognizing the junta's mandate for such a name change and still calling it Burma. Read What’s in a Name: Burma or Myanmar? if you're interested in further details on the back and forth of the country's name changes.

Posted by ambisinistral at 4:07 PM No comments:

Get ready for an ethereal weekend with Chase and Sierra Eagleson.

Posted by ambisinistral at 8:11 AM No comments:

The engineering of the Wright brothers' first airplane

Posted by ambisinistral at 8:49 AM No comments:

These are movie posters of silent films from the 1920s. Between their goofily maudlin stories and the sensibilities of that time, I'm sure they have oodles of PC sins oozing from them. Much less being green lit to be made, I wonder if they could even be viewed in these days of neo-Victorianism?

The posters are from Go to Cinema! at the PICRYL archives. There are more examples after the jump, and even more at the link. 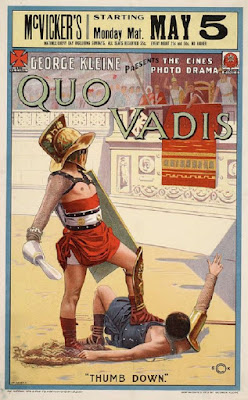 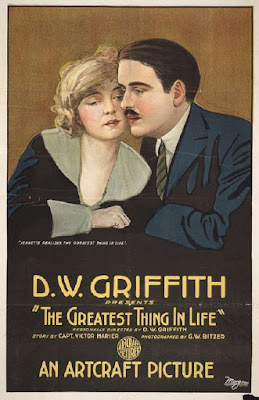 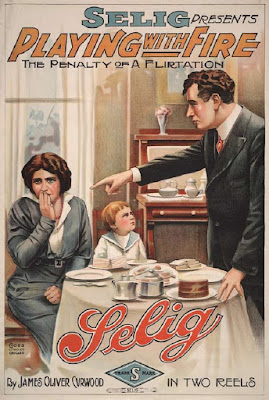 Read more »
Posted by ambisinistral at 11:13 AM No comments:

Just What I Needed

Get ready for an appreciative weekend with Sevenview.

Email ThisBlogThis!Share to TwitterShare to FacebookShare to Pinterest
Labels: Just What I Needed, Music, Sevenview, TGIF

Playing cards from the 16th and 17th centuries

These images are of playing cards from the 16th and 17th centuries. I believe they are all of the face of the cards, I would be curious to see if their backs are highly decorative. The suits and card values seem to be the same as modern cards.

These images, and those after the jump, are from the Paris Musées digital collection. There are more at the link, you can also download zips of each card which contain the card's image as well as a PDF with further information. The PDF is in French. 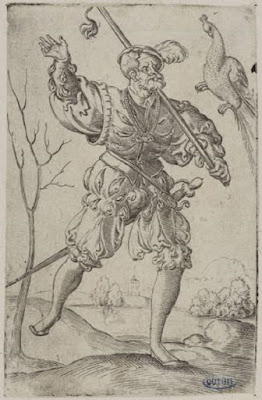 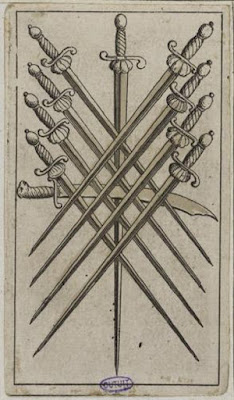 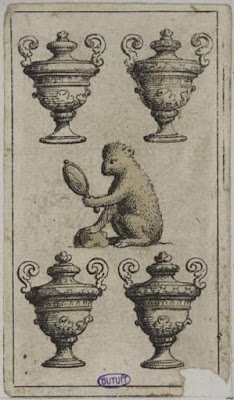 Read more »
Posted by ambisinistral at 1:22 PM No comments: