These are paintings that show snow covered landscapes. I hate snow and cold, hence my move south many years ago. So, rather than being the serene snowscapes implied by the post's title, I consider them to be hellscapes. I get the heebie-jeebies just looking at them.

For those of you northerners who claim to enjoy the stuff, you can admire this artwork when you take breaks from shoveling your sidewalks. 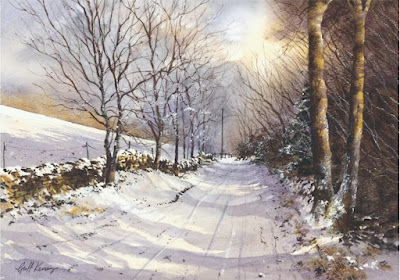 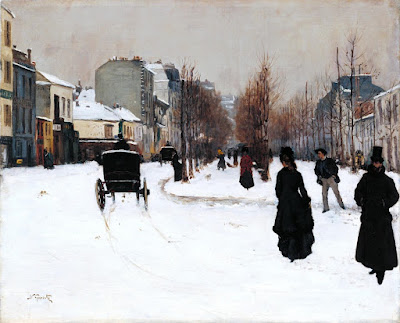 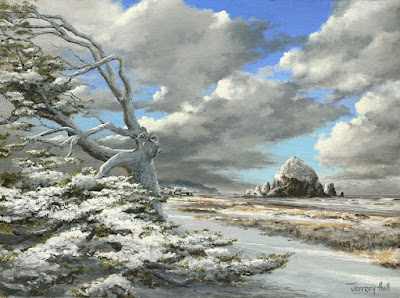 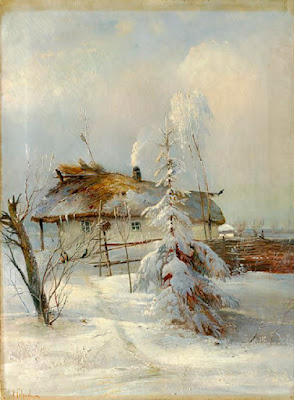 Read more »
Posted by ambisinistral at 6:42 AM No comments:

In this video Quang Tran, a popular YouTuber cooks his version of a Navajo meal. He's Canadian, and his parents are Vietnamese, so he got his recipes from the internet. In his comment section, which is blessedly free of cultural appropriation nonsense, the Native Americans appreciate him highlighting their cuisine, and they seem to think he did a good job of it (although they all say his tacos are too crunchy).

At one time I wondered why there weren't more Amerindian restaurants, but then it occurred to me that Mexican food was largely indigenous cuisine, so I guess there are a lot of them. With that in mind, one of the commenters, Phillip Begay, said, "I eat it every day blue cornmeal mush mutton stew coffee. Potato with spam on hot tortillas." While I was surprised at Spam being added to their cuisine, a little later commenter L M added, "This is more contemporary native Americans food. The result of tribes being pushed to subpar reservations and given rations. It’s sorta like our “soul food” being different from African cuisine." There's no denying, the Indian's got boned with the reservation system.

Half of the video is Tran making the meal, and the other half is him eating it. As he eats, he gets tangled up in the proper term for Indians: he calls them American Indians, but quickly corrects to Native Americans (a linguistic contrivance I find to be clumsy -- I much prefer Amerindian if you need to clarify that they're not subcontinent Indians). He then uses the Canadian Aboriginal, with Indigenous and First Nation no doubt floating around in the background.

Speaking of naming, the tribal names themselves are not what they appear. Apparently, most tribal names came from their neighboring tribes. Most tribes called themselves the 'people' and other tribes the 'enemy'. So, when explorers would ask who lived next to them, they would get that tribe's name for the other tribe. From Original Tribal Names of Native North American People we discover that the Navajo actually called themselves Dine'e (The People) and it was the Pueblos who called them the Navajo (planted fields). Still, in this day all of the Navajo in the thread identified themselves as Navajo.

Regardless, the meal looks good, although I'm not too sure about that blue corn mush.

Posted by ambisinistral at 11:28 AM No comments:

Ain't Misbehaving (I'm Savin' My Love For You)

Get ready for a compliant weekend with Leon Redbone.

Posted by ambisinistral at 6:38 AM No comments: 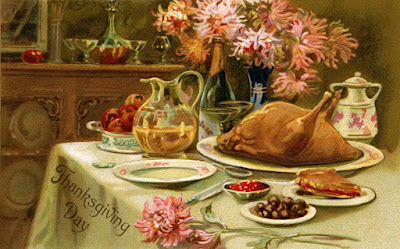 Thanksgiving, man. Not a good day to be my pants.
- Kevin James -

Thanks for the Memory

Last year, in the spirit of the holiday, I decided to post some traditional Thanksgiving music. Much to my surprise I discovered there was no such genre. Since I'm not one to let reality get in my way, I created the Thanksgiving music genre and added the Ralph Rainger/Leo Robin song Thanks for the Memory as the first entry into the genre.

Well, a year has passed, and I have to confess that I've been too lazy to add another song to the catalog of traditional Thanksgiving music, so here it is again, this time sung by Jane Morgan. Maybe next year I'll work up the energy to find a second song, but in the meanwhile enjoy, and be thankful, for what you get.

Posted by ambisinistral at 7:27 AM No comments:

Email ThisBlogThis!Share to TwitterShare to FacebookShare to Pinterest
Labels: Happy Thanksgiving, Jane Morgan, Thanks for the Memory

While inflation has priced Turkey out of the reach of many, that's still no reason not to have a tasty and elegant Thanksgiving feast. Since Flare's aim is to educate as well as elevate, here's a link to Depression-Era Dishes: 9 Budget Recipes That Are Still Good Enough To Eat Today. Certainly, you'll find a budget friendly and yummy dish to make you forget roast turkey, stuffing, cranberries and pumpkin pie. Below is one of their recipes which is sure to get your tastebuds drooling.

Instructions: Cook pasta until it's not quite done, then add sliced hot dogs and canned ingredients. Bring to a boil, then allow to simmer until pasta is done.

Posted by ambisinistral at 12:44 PM No comments:

Get ready for a granulated weekend with Martin Zarzar.

Posted by ambisinistral at 7:00 AM No comments:

Ma Xiaowei is a Chinese artist who works in ink and watercolors. He draws his inspiration from the old buildings in Suzhou in Southern China. He likes the architecture and foliage of the area. These images are from his Instagram feed which frequently shows the stages of his works in progress, as well as details from some of his artwork. 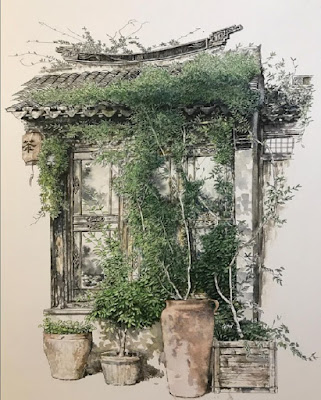 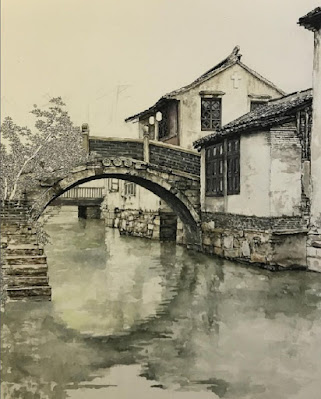 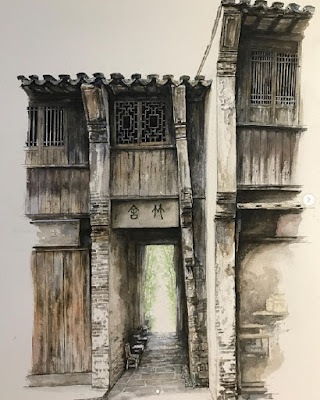 Read more »
Posted by ambisinistral at 9:25 AM No comments:

Above is a video of a digital adder that uses water instead of electrons. I know Boolean logic and binary math so I understood how the binary addition worked. I'm not sure how easy it would be to understand if you didn't know that stuff, but it is interesting.

Posted by ambisinistral at 10:27 AM No comments:

Blitzkrieg Baby (You Can't Bomb Me)

Get ready for a belligerent weekend with JazzMaTazz.

Posted by ambisinistral at 8:03 AM No comments:

Below is an excerpt from the diary of Sgt. Reese Melvin Russell, Company E, 317th Infantry Regiment, 80th Division. It is from the Library of Congress' Veterans History Project Collection, World War I: Diaries and Memoirs archive. He was gassed during his tour but made it home. His daughter Frances found the diary long after he died. He was haunted by the war and for the rest of his life he slept poorly and drank too much. On this Veterans Day give a thought to all our veterans, each with their own stories to tell.

I stepped over one [of our wounded] and he said, 'Sgt, can't you please do something for me for I am killed.'... He had a grenade in his pocket and he got it out with his good hand, one hand was torn up pretty bad. He handed the grenade to one of the men and said, 'Give them [the enemy] this. I wish I could.'

Posted by ambisinistral at 2:00 AM No comments:

For those that need a drink today 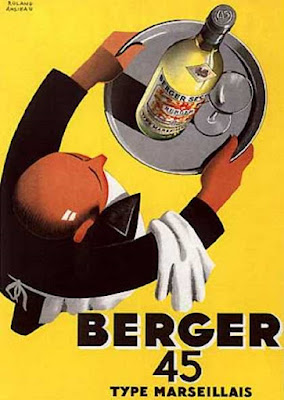 He was a wise man who invented beer.
- Plato -
Posted by ambisinistral at 8:07 AM No comments:

One of the most annoying things in this year's election has been the proliferation of campaign text messages. My phone has been bombarded with the idiotic things. Anyway, unless you're one of those boobs who early voted by mail, good luck with your vote today. May your side win. That is, unless it is the side I'm voting against.

Email ThisBlogThis!Share to TwitterShare to FacebookShare to Pinterest
Labels: elections

A motorcycle ride in India

Rather than my usual Walking in Cities video, this is a clip of a fellow riding a motorcycle in Bhubaneshwar, India. The traffic is insane, who knows what the rules of the road are, but I gather the road's lanes are more theoretical than something strictly adhered to. The guy is also riding his bike pretty fast, I would be terrified to be on the back of it. I wonder how many traffic accidents a day happen in that place.

Speaking of accidents (have you ever seen such a subtle segue?) I once read a Slashdot post where a fellow from Bangladesh said that, if you were ever driving on a rural road and accidentally whacked into a pedestrian, your best move was to step on the gas and get away as fast as possible. The other posters in the thread were horrified by what a callous monster he was. He defended himself by pointing out that if you did stop the locals would demand an outrageously high compensation after first beating you to a pulp or worse. He had a point I suppose, but still...

Posted by ambisinistral at 11:40 AM No comments:

Email ThisBlogThis!Share to TwitterShare to FacebookShare to Pinterest
Labels: India, walking in cities

Don't Fence Me In

Get ready for a unfettered weekend with Labrinth.

Posted by ambisinistral at 8:04 AM No comments:

Email ThisBlogThis!Share to TwitterShare to FacebookShare to Pinterest
Labels: Don't Fence Me In, Labrinth, Music, TGIF

It used to be that most public establishments would have ashtrays with matchbooks laid next to them. The matchbooks would have advertisements on them, for either the business itself or some other service. Of course, since the matchbooks were small, the ads were tiny as well. As a result, the graphics and ad copy were minimal.

With the decline of public smoking promotional matchbooks have faded into the past. These images, and those after the jump, are of some old Japanese matchbook covers. There are more at the Flikr stream Japanese matchbox labels. 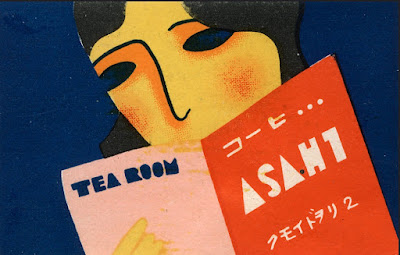 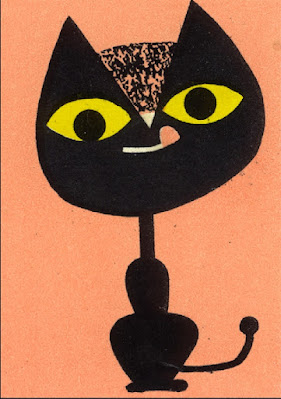 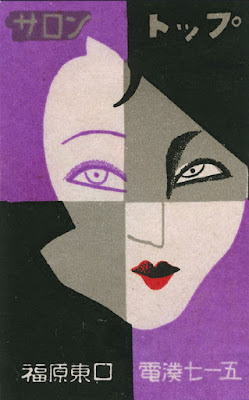 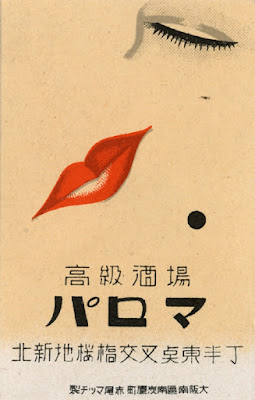 Read more »
Posted by ambisinistral at 11:23 AM No comments: