It's that time of the year for underage mooches to pester people for free candy. The only thing the little panhandlers have to do is dress up in costumes that will offend nobody, including the ghost of Jeffrey Dahmer, and grab as much sugary loot as they can.

Above we have one group of trick or treaters. I must say the guys have fine costumes, but the little girl's costume is pretty low effort. Along with the usual witches, there is another popular costume this year -- the flying monkey. I hear that there are scads of those little goobers running around smashing pumpkins and what-not.

However, there's always at least one doofus on the route that makes the kids sing for their treats or some other obnoxious thing. I hear there's a guy on the route, who dresses like a wizard, that makes the kids do some sort of 'trick' for their treats. When done he still more or less stiffs the trick or treaters with some useless made-up treat like a broken alarm clock, or a participation ribbon from the 6th grade math Olympics, or some fake certificate printed off from the internet; and of course, there are always the grannies who give out some annoyingly healthy treats like apples, or Ka'chava, or some other such thing.

Anyway, have a good Halloween.

Posted by ambisinistral at 6:24 AM No comments:

Email ThisBlogThis!Share to TwitterShare to FacebookShare to Pinterest
Labels: Halloween

Concert video from 1964 in England. The sound and the video are bad, but the performance is electric and the crowd is wild. Early rock and roll done by a brilliant lunatic.

Posted by ambisinistral at 5:56 PM No comments:

Get ready for a salutational weekend with Jeff Bates.

Posted by ambisinistral at 6:24 AM No comments:

Enjoy, there are more after the jump. 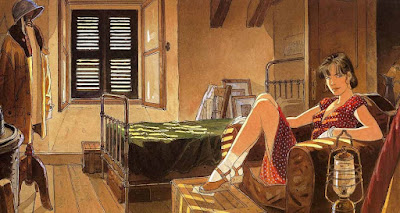 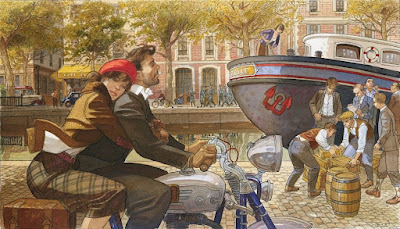 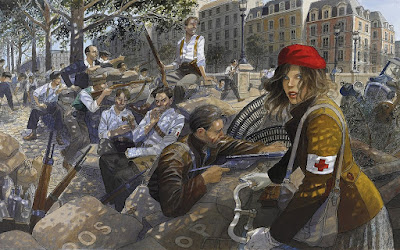 Read more »
Posted by ambisinistral at 3:14 PM No comments:

This is a small Rehan Brother Electric Industry factory in India that makes electric motors. While most of the work seems tedious, I definitely would not want to work in the area that pours the molten metal into the molds. One doesn't generally think of electric motors as being essentially hand-built, so I wonder how reliable are these motors?

Posted by ambisinistral at 1:42 PM No comments:

Dust in the Wind

Get ready for an impermanent weekend with FRANZ Rhythm.

Posted by ambisinistral at 6:55 AM No comments:

These images, and those after the jump, are paintings of trains, train yards and train stations. They primarily feature steam locomotives. In their day they were astonishing pieces of technology. We forget that for most of human history you had to walk, or at best ride a horse, to travel anywhere overland. The took a long time and trains were the first vehicles that greatly shrunk the time between two points.

Today if we talk about trains at all it is the fetishists of high-speed rail. High-speed rail is used to move people, but in the U.S. we use our rail network to move freight, and so there is little real interest in high-speed trains. 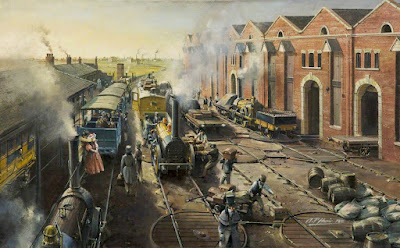 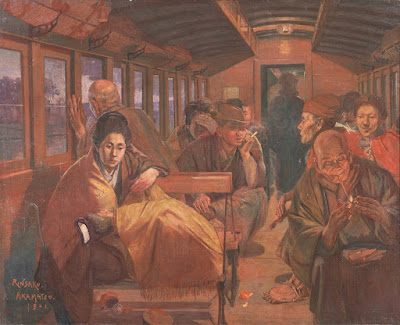 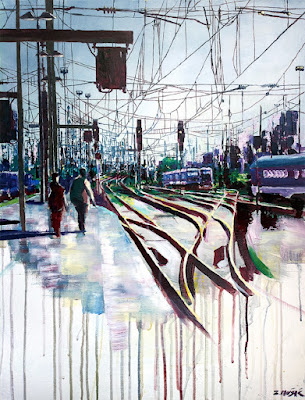 Read more »
Posted by ambisinistral at 2:15 PM No comments:

Who among us doesn't crave a traditional American meat sandwich? I'm not sure what it is, but whatever it is it looks tasty. There are four variations of the meat sandwiches, and each one looks like they would be worth trying. Below we have double bacon cheeseburgers and a Texas-style BBQ, and my lord, I don't know what a Texan would think of it, but the BBQ platter of brisket, ribs, chicken, home-made sausage, French fries and stew looks amazing.

These are all Korean cooks. With the abomination of cultural appropriation properly shoved aside, this is cultural diffusion in operation. I can't wait until the day when I can go to a local restaurant and order an Americanized version of a Korean American meat sandwich. The World turns round and round.

You Always Hurt The One You Love

Get ready for a piqued weekend with Molly Nilsson.

Email ThisBlogThis!Share to TwitterShare to FacebookShare to Pinterest
Labels: Molly Nilsson, Music, TGIF, You Always Hurt The One You Love

The Outsider - A K Krueger

The outsider is inside,
Inside the house, staring from the crusted window,
The latch calls to her in rusty tones.
She stares upon its existence,
wishing nothing more than to answer.

But the outsider, she is inside,
Her back turned to what she’s built,
Her eyes upon those who are outside,
Can they save her? Would they care to try?

Her elbow rests upon the dusty sill,
Eyes glossy like Rapunzel, the Golden One,
But she has grown old inside the house,
she has grown blind and deaf and dumb.

The outsider, she once wished,
to leave the depths of her understanding,
to venture into the clashing world,
to face the blatant nature of love,

But the outsider, she is inside,
over much has cried, died and lied.
The weight of gravity holds down the fort,
and her as well; she doesn’t fight.

She holds the hope she’ll someday be tempted,
to leave that which protects her so,
to venture through the grimy view,
lifted by that which holds her low.

The outsider, she’s still inside,
Forever more, should she still hide,
You could say that she should have tried,
She wanted to, with all her pride
To leave that which keeps her inside.

Beat feeting it out of Russia

These are a series of videos by Sergey, a Russian fellow who left the country after the mobilization. He fled to Mongolia. Hard choice to have to make.

The first video shows him crossing the border at Borzya and taking a taxi for a night-time trip across the steppes to Choibalsan in Mongolia. The city is the site of an important battle in the 1930s. In the large battle General Zhukov defeated the Japanese forces, which turned them from pushing into Siberia towards SE Asia instead. In the second video he tours Choibalsan a bit and then, in the third, he's back on the road as he heads to Ulan Bator.

He's low on money, doesn't know the language, has diarrhea and the temperature is 17° F. Tough life being a refugee -- I wish him luck.

Posted by ambisinistral at 10:44 AM No comments:

Get ready for a restored weekend with Imany.

Posted by ambisinistral at 6:44 AM No comments:

Late yesterday afternoon I got my power back. I have a generator that can power my entire house, but I was using it sparingly to preserve fuel. Now that worry is gone.

My internet is still out. With luck I'll get it back tomorrow evening and I'll soon be able to resume posting.

Below are pictures from my marina. My boat survived unscathed, but the other two there had worse luck. They were blown off their jacks, with one losing its mast in the process. 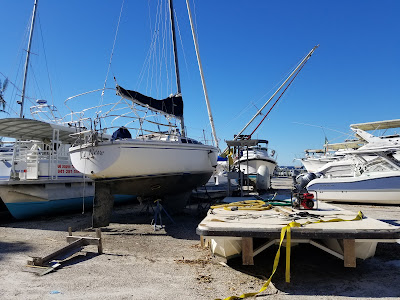 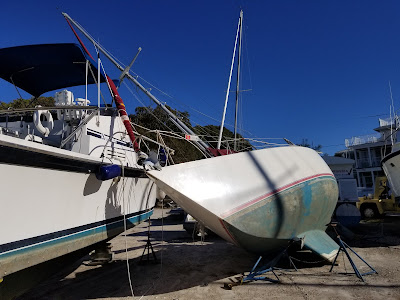 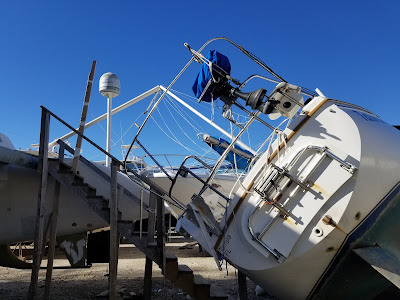 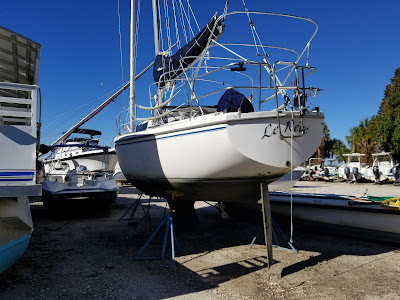 Posted by ambisinistral at 11:16 AM No comments: