Faces of the ancient Egyptian 1%

These are examples of Fayuum Mummy portraits. They're paintings, from the Hellenistic era Egypt, that were attached to mummies and are meant to depict the deceased. However, from the above link:


On first inspection the Fayum mummy portrait paintings look like true-life depictions of actual individuals, but closer analysis reveals that the 'individual' features are sometimes no more than repetitive, formulaic renderings. In other words, quite a few of the portraits appear to have been created from a small number of facial templates, disguised by the use of different fashions, hairstyles and beards.

Regardless, they are still the only extent collection of portraits we have of more common people of antiquity, rather than the kings and generals we usually see in ancient art. That said, it was still only the very upper crust of society that could afford them. 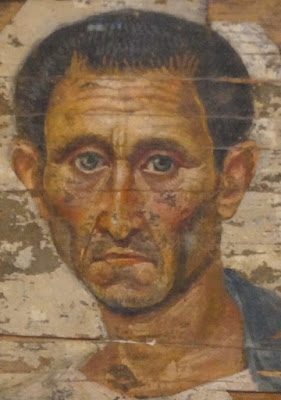 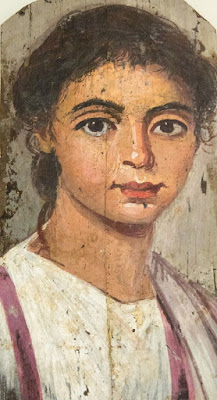 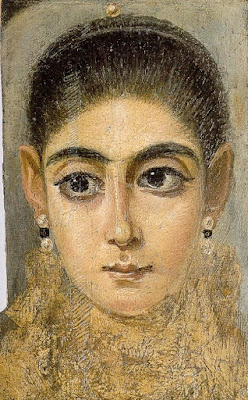 Time Of The Season


Get ready for the other endless season with OptycNerd.

Email ThisBlogThis!Share to TwitterShare to FacebookShare to Pinterest
Labels: Music, OptycNerd, TGIF, Time Of The Season

This video shows some food from a night market in Kaohsiung Taiwan. I love Taiwanese night markets, they feature a lot of stalls and stores with all sorts of goods and have a lot of venders selling street food. Tasting the different foods is a lot of appeal of the places.

Of the food shown I would love to try the Big Takoyaki Ball in a cup (although the commenters to the video seem to think they are overcooked and that it is a shame to break the balls up before serving them) or the Flaming Beef Cubes cooked with a blowtorch.

Posted by ambisinistral at 5:31 PM No comments:

The fabric of society 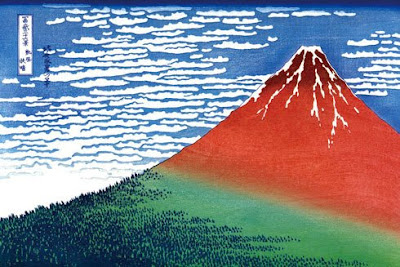 At last he looked over at his host, contemplating the dead civil servant's American flag shoulder patch. He unscrewed the flask and this time raised the container towards the hooded garment.

"Believe it or not, Mr. Postman, I always thought you folks gave good and honest service. Oh, people used you as whipping boys a lot, but I know what a tough job you all had. I was proud of you, even before the war.

"But this, Mr. Mailman" - he lifted the flask - "this goes beyond anything I'd come to expect! I consider my taxes very well spent." He drank to the postman, coughing a little but relishing the warm glow.

He settled deeper into the mail sacks and looked at the leather jacket, ribs serrating its sides, arms hanging loosely at odd angles. Lying still, Gordon felt an sad poignancy - something like homesickness. The jeep, the symbolic, faithful letter carrier, the flag patch ... they recalled comfort, innocence, cooperation, an easy life that allowed millions of men and women to relax, to smile or argue as they chose, to be tolerant with one another - and to hope to be better people with the passage of time.

Gordon had been ready, today, to kill and to be killed. Now he was glad that had been averted. They had called him "Mr. Rabbit" and left him to die. But it was his privilege, without their ever knowing it, to call the bandits "countrymen," and let them have their lives.

Gordon allowed sleep to come and welcomed back optimism - foolish anachronism that it might be. He lay in a blanket of his own honor, and spent the rest of the night dreaming of parallel worlds.

A rainy day in Kyoto

In the above clip Ranbalac, the videographer, visits the popular Golden Temple in Kyoto on a rainy day. In 1950 the actual Golden Temple was burned to the ground by an insane monk. The present structure was rebuilt in 1955.

The gardens are beautiful, and the sea of umbrellas floating through them, along with the sound of the rain, make for an interesting entry into my walking in cities video series.


Get ready for the sands of time this weekend with Existan.

Machine to make a DIY spring

Posted by ambisinistral at 6:50 PM No comments:

I visited the Kennedy Space Center (KSC) at Cape Canaveral last week. It has been over 20 years since I last visited the Center, and the changes were significant. As is the way of things in the Sunshine State, bits and pieces of old Florida are eventually replaced with a newer more Disneyfied version. The Center has not escaped that evolution.

The Center used to have a field where various rockets -- from the Redstone to the Saturn -- were displayed, a large building holding capsules and other space hardware and two tours. One tour was of the old Mercury and Gemini facilities (the Mercury pad was particularly striking with the blockhouse very near the launch pad and stuffed full of tube powered analog computers and, as its center piece, the large red button you pushed to launch the rocket). The other tour was of the Apollo facilities and featured launch control, the VAB and the Shuttle landing strip.

Upon entering the Center on this trip the first thing I noticed was the change to the rocket field, now called the rocket garden. It now had large buildings along its perimeter and pathways, some elevated, wound between the rockets. The effect was to obscure both their actual size and their size relative to the other rockets. It was difficult to compare them to each other.

The Saturn rocket has been moved and is now housed inside a very large building. Again, its size is somewhat obscured by not being as easily visible as well as now being contained in a larger structure. On the plus side the Shuttle Atlantis was now also being displayed. It was hung at an angle in a large building with its cargo bay doors open and, with two levels of walkways, you could get a very good look at it.

The museum that had the capsules and hardware was no more. I assume some of the stuff got scattered, but I never saw the Mercury, Gemini or Soyuz capsules, nor the Skylab mockup. In place of the museum were a number of 3D and iMax movies. I didn't watch any.

I think the old Mercury and Gemini pads got disassembled -- it is a shame they didn't at least move the Mercury blockhouse. Launch complex 34, where the Apollo Moon missions took off from has been leased by SpaceX. They've constructed their own launch tower.

The Center used to be the best tourists trap in Florida and I think it still ranks up there as one of the best to visit. It's a shame some of the history seems to have been lost or minimized, but I suspect it is a better stop for families these days. Regardless, if you're in Florida be sure to schedule a visit.

Posted by ambisinistral at 6:46 PM No comments:

Posted by ambisinistral at 1:31 PM No comments: 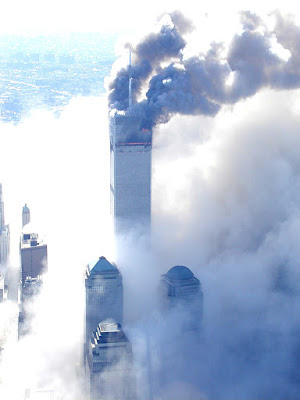 My father, Norberto, was a pastry chef at ­Windows on the World in Tower One. For 10 years, he made many fancy and famous ­desserts, but the sweetest dessert he made was the marble cake he made for us at home. … Whenever we parted, Poppi would say, ‘Te amo. Vaya con Dios.’ And this morning, I want to say the same thing to you, Poppi. I love you. Go with God. – Catherine Hernandez

I'm going to be gone for a few days. Meanwhile, entertain yourself with this short video of some Russian grenade-assisted fishing. What could possible go wrong?

The war and peace of impossible ambitions

To some people, the impossible is impossible. One fine day, they wake up in the morning knowing that they will never hold the moon in their hands, and with the certainty, perfect peace descends on them. - Elizabeth Bibesco

Posted by ambisinistral at 8:54 AM No comments:


Get ready for a strangely diverse weekend with Mingoz and The Brotherhood.

In 1966 a German film crew loosely recorded a day in the life of a Japanese family. There is no narration. There are scenes of them dining, various factory, market and shopping district scenes. In the street scenes it is surprising how many people are dressed in the old style. You don't see that much anymore, instead these days you see kids in the weird anime inspired costumes and what-not.

These are newspaper ads for WWII War Bonds. Financing the war involved printing money. The bonds, which actually had a poor rate of return, were used to remove excess cash from the economy to control inflation. As you can see in these examples patriotism, the sacrifice of the soldiers, and the separation from husbands/boyfriends/sons (or the girl back home) were the themes of the ads.

These examples, and those after the jump, are from Duke University's Digital Repository. There are more at the link. 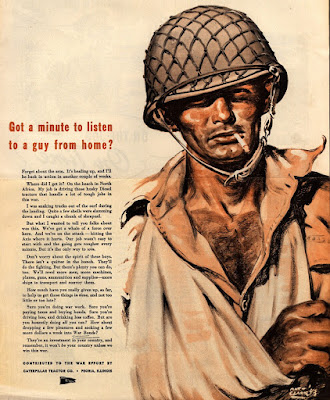 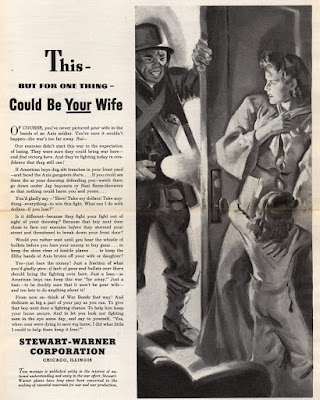 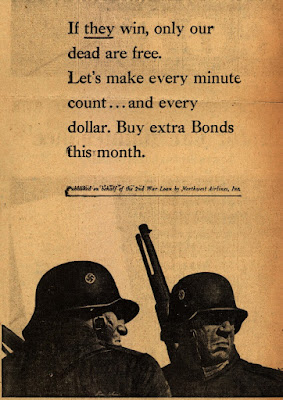 Read more »
Posted by ambisinistral at 12:39 PM No comments:

On the assembly line

Hopefully you have the day off from your worker bee job. Regardless, have a good Labor Day.