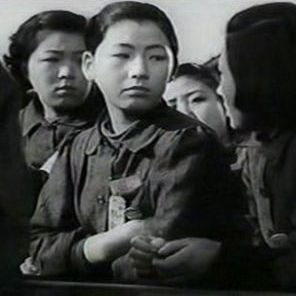 This Stratfor article deals with Japan's energy dependence and how their problems with their nuclear reactors, as well the unrest in the Middle East, the main source of their oil, are converging to show how fragile of a base their industrial economy rests upon.

Freidman discusses how Japan's nuclear plants were an attempt to provide itself with an alternative to having to import 100% of their energy needs and how the post-tsunami problems with the reactors have shaken Japan's faith in that supposed safety net.

The last time Japan felt threatened over imports led them to war with the U.S. and so I reached back to the WWII Japanese propaganda film The Most Beautiful for today's Hot Stratfor Babe, Yoko Yaguchi. As far as I can tell that's her above.

The Most Beautiful was released in 1944 and is Akira Kurosawa's second film as a director. It is a propaganda film which centers on a group of teenage girls working in an optics factory to support the war effort. Yoko Yaguchi was the star of it, and she was to eventually marry Kurosawa.

My best wishes go out to the Japanese. The scale of suffering and destruction they have endured these last several days in unimaginable. It is going to take extraordinary effort and treasure for them to rebuild. I hope the U.S. gives them our full support.


JAPAN, THE PERSIAN GULF AND ENERGY

Over the past week, everything seemed to converge on energy. The unrest in the Persian Gulf raised the specter of the disruption of oil supplies to the rest of the world, and an earthquake in Japan knocked out a string of nuclear reactors with potentially devastating effect. Japan depends on nuclear energy and it depends on the Persian Gulf, which is where it gets most of its oil. It was, therefore, a profoundly bad week for Japan, not only because of the extensive damage and human suffering but also because Japan was being shown that it can't readily escape the realities of geography.

Japan is the world's third-largest economy, a bit behind China now. It is also the third-largest industrial economy, behind only the United States and China. Japan's problem is that its enormous industrial plant is built in a country almost totally devoid of mineral resources. It must import virtually all of the metals and energy that it uses to manufacture industrial products. It maintains stockpiles, but should those stockpiles be depleted and no new imports arrive, Japan stops being an industrial power.

The Geography of Oil

There are multiple sources for many of the metals Japan imports, so that if supplies stop flowing from one place it can get them from other places. The geography of oil is more limited. In order to access the amount of oil Japan needs, the only place to get it is the Persian Gulf. There are other places to get some of what Japan needs, but it cannot do without the Persian Gulf for its oil.

This past week, we saw that this was a potentially vulnerable source. The unrest that swept the western littoral of the Arabian Peninsula and the ongoing tension between the Saudis and Iranians, as well as the tension between Iran and the United States, raised the possibility of disruptions. The geography of the Persian Gulf is extraordinary. It is a narrow body of water opening into a narrow channel through the Strait of Hormuz. Any diminution of the flow from any source in the region, let alone the complete closure of the Strait of Hormuz, would have profound implications for the global economy.

For Japan it could mean more than higher prices. It could mean being unable to secure the amount of oil needed at any price. The movement of tankers, the limits on port facilities and long-term contracts that commit oil to other places could make it impossible for Japan to physically secure the oil it needs to run its industrial plant. On an extended basis, this would draw down reserves and constrain Japan's economy dramatically. And, obviously, when the world's third-largest industrial plant drastically slows, the impact on the global supply chain is both dramatic and complex. [continued after the jump]
In 1973, the Arab countries imposed an oil embargo on the world. Japan, entirely dependent on imported oil, was hit not only by high prices but also by the fact that it could not obtain enough fuel to keep going. While the embargo lasted only five months, the oil shock, as the Japanese called it, threatened Japan's industrial capability and shocked it into remembering its vulnerability. Japan relied on the United States to guarantee its oil supplies. The realization that the United States couldn't guarantee those supplies created a political crisis parallel to the economic one. It is one reason the Japanese are hypersensitive to events in the Persian Gulf and to the security of the supply lines running out of the region.

It is to mitigate the risk of oil dependency -- which cannot be eliminated altogether by any means -- that Japan employs two alternative fuels: It is the world's largest importer of seaborne coal, and it has become the third-largest producer of electricity from nuclear reactors, ranking after the United States and France in total amount produced. One-third of its electricity production comes from nuclear power plants. Nuclear power was critical to both Japan's industrial and national security strategy. It did not make Japan self-sufficient, since it needed to import coal and nuclear fuel, but access to these resources made it dependent on countries like Australia, which does not have choke points like Hormuz.

It is in this context that we need to understand the Japanese prime minister's statement that Japan was facing its worst crisis since World War II. First, the earthquake and the resulting damage to several of Japan's nuclear reactors created a long-term regional energy shortage in Japan that, along with the other damage caused by the earthquake, would certainly affect the economy. But the events in the Persian Gulf also raised the 1973 nightmare scenario for the Japanese. Depending how events evolved, the Japanese pipeline from the Persian Gulf could be threatened in a way that it had not been since 1973. Combined with the failure of several nuclear reactors, the Japanese economy is at risk.

Today's situation is in no way comparable to what happened in 1941 except for the core geopolitical reality. Japan is dependent on imports of raw materials and particularly oil. Anything that interferes with the flow of oil creates a crisis in Japan. Anything that risks a cutoff makes Japan uneasy. Add an earthquake destroying part of its energy-producing plant and you force Japan into a profound internal crisis. However, it is essential to understand what energy has meant to Japan historically -- miscalculation about it led to national disaster and access to it remains Japan's psychological as well as physical pivot.

Japan is still struggling with the consequences of its economic meltdown in the early 1990s. Rapid growth with low rates of return on capital created a massive financial crisis. Rather than allow a recession to force a wave of bankruptcies and unemployment, the Japanese sought to maintain their tradition of lifetime employment. To do that Japan had to keep interest rates extremely low and accept little or no economic growth. It achieved its goal, relatively low unemployment, but at the cost of a large debt burden and a long-term sluggish economy.

The Japanese were beginning to struggle with the question of what would come after a generation of economic stagnation and full employment. They had clearly not yet defined a path, although there was some recognition that a generation's economic reality could not sustain itself. The changes that Japan would face were going to be wrenching, and even under the best of circumstances, they would be politically difficult to manage. Suddenly, Japan is not facing the best of circumstances.

It is not yet clear how devastating the nuclear-reactor damage will prove to be, but the situation appears to be worsening. What is clear is that the potential crisis in the Persian Gulf, the loss of nuclear reactors and the rising radiation levels will undermine the confidence of the Japanese. Beyond the human toll, these reactors were Japan's hedge against an unpredictable world. They gave it control of a substantial amount of its energy production. Even if the Japanese still had to import coal and oil, there at least a part of their energy structure was largely under their own control and secure. Japan's nuclear power sector seemed invulnerable, which no other part of its energy infrastructure was. For Japan, a country that went to war with the United States over energy in 1941 and was devastated as a result, this was no small thing. Japan had a safety net.

The safety net was psychological as much as anything. The destruction of a series of nuclear reactors not only creates energy shortages and fear of radiation; it also drives home the profound and very real vulnerability underlying all of Japan's success. Japan does not control the source of its oil, it does not control the sea lanes over which coal and other minerals travel, and it cannot be certain that its nuclear reactors will not suddenly be destroyed. To the extent that economics and politics are psychological, this is a huge blow. Japan lives in constant danger, both from nature and from geopolitics. What the earthquake drove home was just how profound and how dangerous Japan's world is. It is difficult to imagine another industrial economy as inherently insecure as Japan's.

The earthquake will impose many economic constraints on Japan that will significantly complicate its emergence from its post-boom economy, but one important question is the impact on the political system. Since World War II, Japan has coped with its vulnerability by avoiding international entanglements and relying on its relationship with the United States. It sometimes wondered whether the United States, with its sometimes-unpredictable military operations, was more of a danger than a guarantor, but its policy remained intact.

It is not the loss of the reactors that will shake Japan the most but the loss of the certainty that the reactors were their path to some degree of safety, along with the added burden on the economy. The question is how the political system will respond. In dealing with the Persian Gulf, will Japan continue to follow the American lead or will it decide to take a greater degree of control and follow its own path? The likelihood is that a shaken self-confidence will make Japan more cautious and even more vulnerable. But it is interesting to look at Japanese history and realize that sometimes, and not always predictably, Japan takes insecurity as a goad to self-assertion.

This was no ordinary earthquake in magnitude or in the potential impact on Japan's view of the world. The earthquake shook a lot of pieces loose, not the least of which were in the Japanese psyche. Japan has tried to convince itself that it had provided a measure of security with nuclear plants and an alliance with the United States. Given the earthquake and situation in the Persian Gulf, recalculation is in order. But Japan is a country that has avoided recalculation for a long time. The question now is whether the extraordinary vulnerability exposed by the quake will be powerful enough to shake Japan into recalculating its long-standing political system.

This report may be forwarded or republished on your website with attribution to www.stratfor.com. Copyright 2011 STRATFOR.


Posted by ambisinistral at 6:15 PM

BOJ has expaned the QE program to 10T Yen to aid the recovery. However it needs to be signficantly bigger to have a meaningful impact.

Your link was a bit messed up -- I think it should be
BOJ’s Quantitative Easing– Go big or go home.