The way to a man's heart

Anybody following the current unrest in North Africa and the Middle East will immediately note that the area is bathed in red. Add in the percentage of a person's income spent on food and the picture looks even worse. For example, both Spain and Algeria are dark red, yet the Spanish spend only 14.6% of their incomes on food, while Algerians spend a whopping 44% on food.

That means that if World food prices go up they'll cut into the discretionary spending of the Spanish, while they'll cut to the bone in places like Algeria.

The Chinese are having a crop failure, but they have money to buy food imports. That, and the increasing transport costs due to rising oil prices, means that the price of food will go up. This does not bode well for stability of any post demonstration/revolution Middle Eastern and North African governments. I think it will almost certainly extend the instability of an already unstable region.

I suspect that whatever governments arise from the latest unrest -- be they better, worse, or more or less more of the same -- that it is likely those governments themselves will be swept away if people grow hungrier. This is going to be a multi-year bumpy ride - Europe, which is already turning to the right is going to face an onslaught of refugees, while the food exporting countries are going to be relentlessly hectored by the UN Food Justice folks.

To end this post, Peter Menzel has put together a series of photographs showing family's weekly expenditures in food around the world. Below, and after the jump, are a few of those photos (from Fresh Pics' What the World Eats Around the World which has more pictures as well as descriptions): 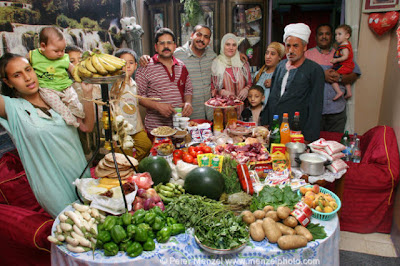 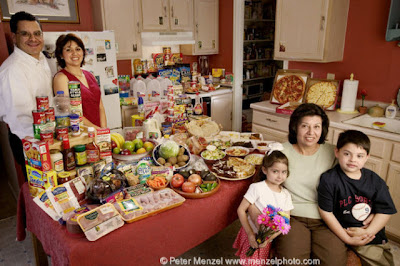 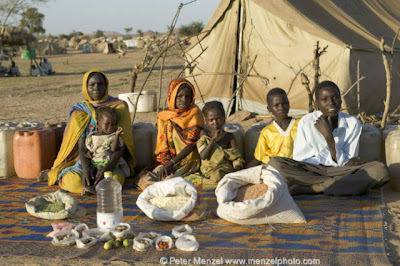 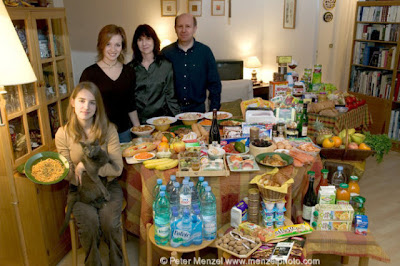 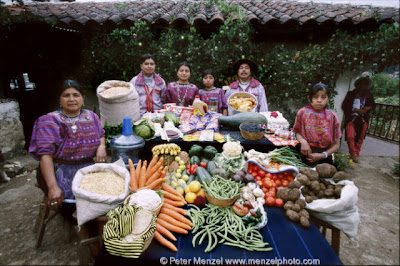 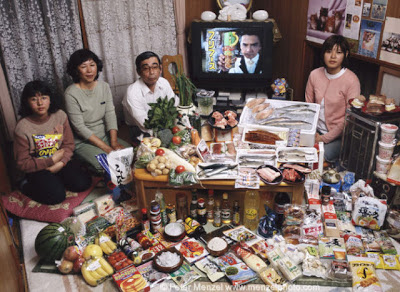 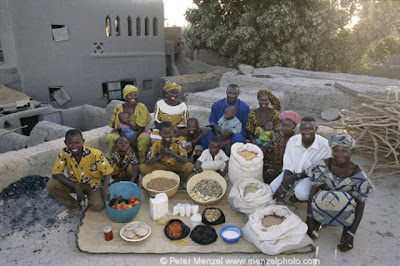 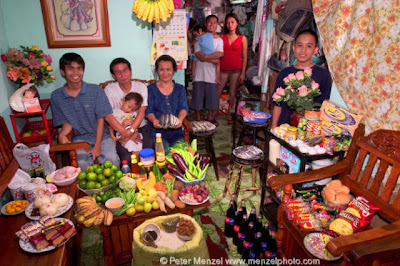 Philipines
Posted by ambisinistral at 3:35 PM

people are holding up food items to show the camera, some cultures would be surprised as to what the french now eat;\0

Ok, as an American, why aren't we trading our food for Oil ? That, or triple the price of our food exported to the OPEC countries and then take the profits and subsidize the tax-payer for his Exxon/Chevron/Mobil/Texaco Bill.

Follow the UN Food Justice link in the post and you'll see the predictable trap being set. Food is being positioned as a right.

Now, I really think there is no reason for people to starve in the world. Withholding food when you know people are going to starve is a ghastly choice to make; but when you look at a place like North Korea it seems to me you have to acknowledge that sending shiploads of free grain isn't really the answer.

If the Food Justice folk put their energies into developing mechanisms that insured that the food made it to the populace, instead of some tinpot dictator's warehouse we might get somewhere, but they won't.

As for OPEC Countries -- seems to me they have the money to pay a fair price. However, I'll say it again -- watch out for the UN Food Justice League. They'll want it for free.

I'm a late-comer to this post, but wanted to say "good job" on the map and photos. Food scarcity is something that I keep at the back of my mind and make mental notes on.