That number always struck me as badly out of context - you'll sometimes read something like "...a number under 350,000 is consistent with a strong labor market...", but that doesn't tell me what I want to know, either. What I want to know is this: what proportion of the people employed last week are unemployed this week, and how does that look in historical context?

Thanks to economagic.com (highly recommended site for raw data, by the way), I have what I wanted.

I've taken the average weekly number of initial jobless claims reported each month since 1967 and divided that by the total number of people employed in that month (nonfarm payrolls). Below I've charted what I think I'll call the "Job Insecurity Index", or JII. Probably already trademarked, but it'll do until someone threatens a lawsuit. 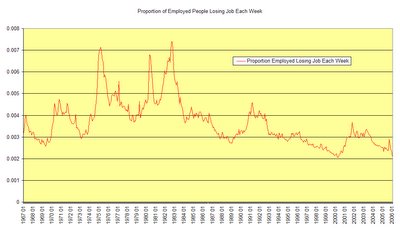 Three things are clear. First, the seventies and early eighties were a lousy time for a lot of people. The JII peaked in September of 1982 at .00741 - 3.5 times what it is today, and from 1974 to 1984 things were consistently worse than they were at the height of the most recent recession. That's right, every single month, for ten years, was worse than October of 2001, the worst month of the 2000-2001 downswing.

Second, recent recessions have been milder, from a "change in JII" perspective, than earlier ones. The "spike" in the JII is much smaller.

Finally, things are pretty darn good right now. In fact, the JII in January 2006 (.00211) indicates that about 1 out of 500 employed people loses his or her job each week. There have only been two better months since 1967 - March and April of 2000 - the height of the tech bubble. This is a boom, people, like it or not. You can hardly lose a job right now.
Posted by Morgan at 7:37 PM

That's an interesting chart. Am I correct in assuming that one can't file for unemployment unless one is layed off?

Sorry, technically I don't think "fired for cause" qualifies you for unemployment, but proving cause is difficult for employers, and I don't think most people even know they don't qualify.

Why can't I find a job as an NBA starting center? I put in my application to the Houston Rockets around a year ago. Isn't there an affirmative action program to assist middle aged men who are only 5"10 and 165 pounds?

In 1968, Milton Friedman was on the fringe of respectability. His Presidential Address to the American Economic Association in 1967 could not have been more defiant of the conventional wisdom. At that time, economists thought that the economy could be "fine tuned" by government to achieve any desirable unemployment rate, with a "trade-off" that allegedly involved accepting higher inflation. Inflation, in turn, could be curbed by government action to control, or at least influence, the price- and wage-setting decisions of private firms.

Friedman argued instead that there is a "natural rate" of unemployment to which the economy will tend, regardless of how government manipulates aggregate demand. He warned that attempts to use monetary and fiscal policy to drive the unemployment rate lower would only result in ever-accelerating rates of inflation. Moreover, he argued that the only cure for inflation was control over the rate of growth of the money supply.

In 1968, Friedman's views were far from the mainstream. When Paul Samuelson wrote an article for the Canadian Journal of Economics on "What Classical and Neoclassical Economic Theory Really Was," he sneered that for modern economists trying to understand monetarism was like being a farmer who had lost his jackass and having to ask, "If I were a jackass, where would I go?" In short, Samuelson considered Friedman a jackass.

About this time, "fine tuning" began to fail, and inflation started to rise, just as Friedman had predicted. In 1971, President Nixon tried the Conventional Wisdom and adopted wage and price controls. The results proved disastrous. Finally, in 1979, President Carter in desperation allowed a new Federal Reserve Chairman, Paul Volcker, to attempt the monetarist cure for inflation. The result was successful.

Your chart seems to be strong proof for Kling's assertion.

It seems clear that the economy has become progressively more stable since about 1980. Recessions have been fewer and farther between, per capita growth rates have smoothed out, job insecurity (which, though we just met, I already think of as proxy for economic instability) has dropped, unemployment has dropped significantly and isn't prone to big swings, labor force participation rates have leveled off, inflation and interest rates have fallen and become less jumpy... I think "stability" describes it.

Ironically, Volcker may have caused the huge spikes in '80 and '82 by drastically changing the economic milieu, but that would be a case of short term pain for long-term gain. A good trade.

Thanks for the link to Kling. I hadn't read it - well worth the effort.

I think Volcker was step one in what was needed to fix the economy. Step 2 was Reagan, particularly his breaking of the unions.

In the '70's people were seriously talking about nationalizing the oil companies. There was a huge push in the socialist direction but things just kept getting worse. I remember Nixon's socialist wage and price controls very well. I worked in a grocery store in those days and each week a big book would arrive from Washington telling us what the prices of everything were going to be. Whenever the prices got too low the item would sell out immediately and was not reorderable for weeks from the warehouse. Econ 101 in action.

Running a business was considered by many at that time to be the next thing to being a criminal. The stock market was very low and for good reason. With the Volcker-Reagan change the country switched to being business-friendly and the economy and stockmarket have never looked back.

Interesting to look at your misery index and think about a feedback loop with a long delay....

And 20's somethings are complaining about how bad the economy is now.

They have no idea.

Stability has an interesting effect upon people. It allows people to promote their anxiety into fear. The pursuit of stability becomes the primary goal rather than a condition under which risks are more acceptable.

Risk takers look at the safety net and see it as something that allows them the opportunity to design, practice, and implement more intricate trapeze acts, so to speak. More ordinary people sit down on the swing and start fretting about how high up they are and whether or not the safety net will hold them should they somehow fall off the swing and slowly but surely lose track of the mild thrill of swinging high above the ground with little or no real risk and, instead, convert the swing into what they perceive as a tenuous and dangerous perch. And the thought of the ladder becomes frightenting in the extreme.