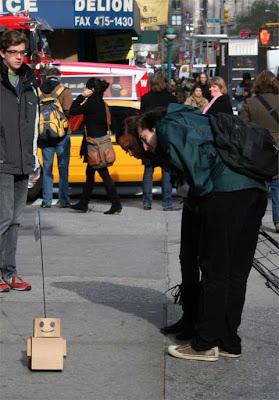 This is an odd little experiment. A woman built a very simple robot, well... not really a robot, just a tiny little electric cart with a cardboard robot-looking body with a goofy smiley face on it.

She then stuck a little flag on it that said the robot needed help getting to a particular destination and left it loose in New York City. She put it down and stepped back, her camera hidden in her purse, and watched what happened.

On her site tweenbots.com she has a video of part of its travel from the northeast to the southwest Corner of Washington Square Park. It took 42 minutes for the little guy to make the trip, and 29 people helped it on its way.

The people who help have interesting reactions. They'll find it stuck against a bench or in a pot hole, read the flag and then fiddle around some trying to get the robot headed in the right direction. The title of this post comes from a comment one of the robot Samaritans spoke to the Tweenbot as he aimed it on then next leg of its journey.

At her site she has information about her future Tweenbot schemes. They're apparently part of a project she is doing for a thesis in her studies.

Posted by ambisinistral at 11:23 PM