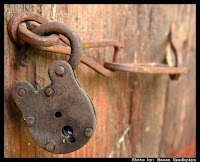 Credit has to be given to Breitbart for how he has manipulated the legacy media's weakness against itself. The speed at which this story grew is a direct result of how he rolled out the ACORN story. The legacy media has lost its monopoly on what is news and what is not. I think that will prove to be the real significance of this kerfuffle.
Posted by ambisinistral at 12:33 AM

The turning point to which you refer:

This? Sherrod seems still enamored with the notion of dividing people into Us and Them as she babbles on and on. She's not the only one.

Yes, in the past various non-MSM outlets have managed to eventually drive stories into the main stream press, but that has usually taken time. However, I'm talking about something a little different in this post.

Newspapers have something they call a "budget meeting" where they decide how to allocate the stories to the column inches they have available. I imagine TV news does the same with their time slots. This is their most efficient way of controlling stories -- they can either judge them not news worthy and ignore them, or give them only a couple of column inches inside a section.

Drudge with Lewinsky, the Swiftboat people, Edwards' mistress, the ACORN story, the early Tea Party gatherings, etc. all made it to the MSM, but it took a considerable amount of pushing and the "budget meeting" process blunted the early unfolding of those stories.

What I'm saying was the turning point is that Breitbart's budget meeting, clearly and unambiguously, trumped the MSM news cycle. He drove the story and it broke on a national scale the afternoon after he posted it.

The advantage of doing that is considerable. In all the cases I mentioned above the MSM could ease into the stories and present them with a spin by the time they got to them (who can forget the NYT introducing the Swiftboat story with a chart as to who contributed funding to running the ads while ignoring the allegations?).

In the Sherrod story they lost control of breaking it to the national audience. they were forced to react, and -- aside from the Administration's bungling of it -- the MSM is still probing for an angle on a story they're following on rather than leading.

The only way the one-party media is going to be broken is by continuing this sort of thing. Both sides being able to introduce national stories that are important to them is what a level playing field will ultimately look like. Hopefully we'll see much more of it.

Both sides being able to introduce national stories that are important to them is what a level playing field will ultimately look like.

Like I wrote earlier: She's not the only one who seems still enamored with the notion of dividing people into Us and Them as...babbles on and on.

Not particularly noteworthy, but sometimes...

To fit in with the change of events, words, too, had to change their usual meanings. What used to be described as a thoughtless act of aggression was now regarded as the courage one would expect to find in a party member; to think of the future and wait was merely another way of saying one was a coward; any idea of moderation was just an attempt to disguise one's unmanly character; ability to understand a question from all sides meant that one was totally unfitted for action. Fanatical enthusiasm was the mark of a real man, and to plot against an enemy behind his back was perfectly legitimate self-defence. Anyone who held violent opinions could always be trusted, and anyone who objected to them became a suspect. To plot successfully was a sign of intelligence, but it was still cleverer to see that a plot was hatching. If one attempted to provide against doing either, one was disrupting the unity of the party and acting out of fear of the opposition. In short, it was equally praiseworthy to get one's blow in first against someone who was going to do wrong, and to denounce someone who had no intention of doing any wrong at all. Family relations were a weaker tie than party membership, since party members were more ready to go to any extreme for any reason whatever. These parties were not formed to enjoy the benefits of the established laws, but to acquire power by overthrowing the existing regime; and the members of these parties felt confidence in each other not because of any fellowship in a religious communion, but because they were partners in crime. If an opponent made a reasonable speech, the party in power, so far from giving it a generous reception, took every precaution to see that it had no practical effect.

Point taken. There certainly is humor to be found in me talking about two sides needing a level playing field and then airily dismissing somebody else as babbling on about Us and Them.

Truth is I was just being flippant with that line. It was a bit of a throw away line in that Sherrod's story wasn't really intended as the focus of my post.

Rather I was interested in the speed and timing of the story taking center stage. Normally this sort of story gets fought out in the wings, or the orchestra pit, or at the concessions stand in the lobby before it gains traction and makes it to the center stage.

This story leaped from the right side of the blogsphere to the center stage in a day. In the long run I think, long after Sherrod has joined Lloyd Benson as a trivia question, this will be seen as one of the moments when the New Media flexed its muscles. It is an upending of how these stories usually play out.

That said, your comment is spot on. I'm talking about process, but as you've pointed out focusing on process above all else leads to little that is good.

It was "turning point" and most particularly "Us and Them" that led me to comment.

My parents and many of their close friends had journalism degrees. Skepticism regarding what I read and hear was their gift to me. The messenger is always part of the message where I'm concerned.

I was more inclined to history and fiction myself. The rise and fall of states and of civilizations real and imagined was something of a preoccupation for a long time a long time ago. This or that turning point in the formulation, evolution and breakdown in concensus is a big part of that.

While reading Thucydides today I was reminded that the disintegration he describes ended with Athens being spared obliteration for services previously rendered and then not so many years later martyring a leading contrarian who'd been through it all largely because of a fear that history might repeat itself.

Eventually I thought on Xenophon in relation to both Thucydides and Socrates. I sometimes wish someone would make a movie or series based upon his Anabasis.

What a piece of work is a man, how noble in reason, how infinite in faculties...

I'm babbling. I enjoy your posts.

OT but sort of related

I was interviewed by a journalist concerning my research on psychology and videogaming. Oh my goodness, what a butchering of what I said. This was for a "legitimate" Canadian Internet outlet, so no one will actually read it. But it is quite sobering to think how "accurate" much of what we read in the MSM.