The Political Theater of the Absurd 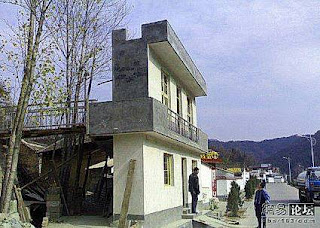 In Henan Province, China, a local ordinance requires that the road-facing sides of all adobe or brick homes be painted white or blue. This is apparently an attempt to address urban blight by making people improve their properties.

This has translated to grand facades, like the one shown to the left, being attached to decaying houses.

Looking at the picture, I wondered why a poor Chinese villager would spend so much money building such a ridiculous facade instead of just improving their home? Were these facades status projects, a brick and mortar version of a peasant's "Sunday Best", or were they something else altogether?

An article in Weird Asia News sheds some light with the following:

When the time arrives for inspection, the view is always from a passing car and there is no way for those inspectors to know that behind the shining walls lie deteriorating adobe homes. (Whether or not they would care or not if they knew the truth is another issue.)
...
Keeping up appearances often comes at a terrible price. This ordinance is vainglorious and obviously only a band-aid solution to the growing problem of urban decay and neglect. In addition and even more insulting to the local populace, this ordinance is a non-remedy sponsored by wasting taxpayers’ money.
How much better could these funds have served the local peasants and farmers who need financial aid so badly?

Ah, it all becomes clearer. Chinese tax dollars at work under the unerring hand of a bureaucrat. There is a certain mad logic at work; it is the appearance of urban decay that disturbs the passing inspectors, so a bit of whitewash and plaster is all that is needed to solve problem. No doubt the expenses saved go into the nearest deserving pocket.

This post is of course an extreme example; none the less, the problem with large government solutions is that you can't distill the scoundrels and buffoons out of them. Worse, once in place the scoundrels and buffoons become the voice of authority. So, when you need your faucet to stop leaking, like it or not you end up with a two-story monstrosity tacked onto your hovel instead.

What could possibly go wrong?

Posted by ambisinistral at 12:51 PM

Reminds of the healthcare debate and the administration's 'picture'
of what they are REALLY telling us by not telling us. The first few pages of the the health plan report may look and read all warm and fuzzy. Get into the heart of the matter and we find all sorts of errors and mistakes that will cost you and me, The American taxpayers a bundle of cash we do not have now. Nor will we have it in the future. The front sure looks good from the cover. Once the inspectors, we the people have had a chance and some time to study the health care plan, it looks about as good as the back of that house in China. Just like the administration that is pushing this carp of plan.

Heh now! I spent some of today's steamy, sweaty morning tidying up the weed... err... ground cover 'twixt the sidewalk and curb. Don't want the inspectors getting all whacky on me when they drive by.

You sure that place isn't on Martha's Vinyard?