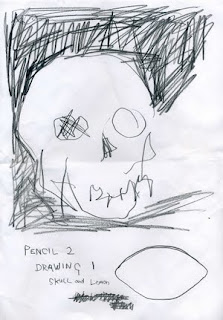 By the way, the Skull and Lemon drawing is from a post Real Drawings by Real Artists at redragtoabull. It was drawn by Harry Adams. Lest we laugh at it too much, or perhaps to add to its humor, it sold for
Posted by ambisinistral at 3:52 PM

What happens if you're already a pencil-necked geek?

At 240 pencils per average cadaver pencil-necked geeks and starving supermodels are her profit margin.

It's the Michael Moores of the world that will derail her get rich quick via death pencils scheme.