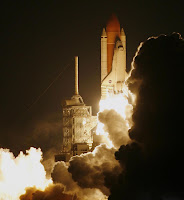 Earlier this week it was reported that Houston was passed over for retiring space shuttle.

As one would expect both Canaveral and the Smithsonian each get one,  Atlantis and Discovery respectively. The Endeavour goes to the California Science Center which makes sense because that is in the area where the shuttles were built.

The real surprise is Houston, home of Mission Control at the Johnson Space Center, being frozen out by the awarding of the Enterprise (a prototype that never flew)  to a museum in New York instead.

I think it only makes much more sense for Houston's Johnson Space Center to get one of the Orbiters, with either California or the Smithsonian getting the prototype Enterprise and New York -- which was peripheral to the space program to say the least -- getting no shuttle.

The suspicion is that Houston not receiving a shuttle was driven by politics. That would of course be a disgrace, and just another sign that this administration knows nothing of history and make any decision, no matter how dubious, with their eyes towards elections. From the article linked above:

Mitchell said President Obama's re-election bid factored into NASA's choosing locations in Florida and California. Houston Mayor Annise Parker struck a similar tone, saying the decision was largely expected since the White House hinted "Houston would not be a winner in this political competition."

"There was no other city with our history of human space flight or more deserving of a retiring orbiter," Parker said in a statement.

Mitchell said he would like a congressional investigation into NASA's decision-making — and expects Texas congressional leaders to call for one.

In a conference call, NASA acknowledged that its choices meant all the shuttles were heading to different coasts and that the middle of the country was shutout, but it defended the decisions and said it would welcome a congressional inquiry.

I suppose it could be worse, the American shuttles at least avoided the the ignoble fate of the Russian Buran Class shuttles.

The Buran, the only Russian shuttle that flew (an unmanned orbital mission) was demolished when the hanger it was being stored in collapsed. The Ptichka was never quite completed and is being stored at the Baikonur Cosmodrome in Kazakhstan. Their third unnamed shuttle was stored outdoors in a parking lot until it was sold to a museum in Germany, while the fourth was sold in pieces on the internet and the final one was scrapped long before any significant work was completed on it.

Posted by ambisinistral at 7:50 PM