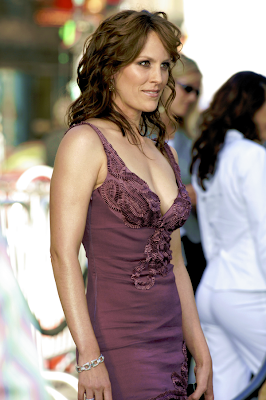 In this Stratfor article Scott Stewart discusses the pitfalls aspiring terrorists face in acquiring the skills they'll need to be successful. In particular, the need to join a group exposes both the terrorist wannabe and the terror cell to penetration by security forces or law enforcement.

Stewart discusses areas of terror cell vulnerability that exist prior to an attack: communications, funding, training and so forth. It is an interesting read about the phase of a terror cells evolution that is rarely considered by the public.

For the Hot Stratfor babe, since the article discussed groups of terrorists, I decided to focus on movies that featured groups of potential Hot Stratfor Babes. Oddly, considering the fact I've only scene bits and pieces of the movie and have tried my best to excise them from my memory, the film Mystic Pizza sprang to mind.

After careful deliberation, I selected Annabeth Gish from the cast to receive this highly coveted honor.

Ms Gish hails from Iowa and claims to be a distant relative of Lillian Gish. I don't know if that is true or just marketing hype,but regardless of the truth of the claim Annabeth has had a very successful albeit slightly low-key career. She's worked steadily since the 1990, generally appearing in several movies as well as on television. It also doesn't look like her career has shown any sign of slowing down.


One of the distinctive features of Stratfor's terrorism and security analysis is its focus on the methodology of attacks. Of course, identifying those responsible for an attack is important, especially in ensuring that the perpetrators are brought to justice. But Stratfor believes that analyzing the way in which an attack was conducted is more important because it can prevent future attacks and protect potential victims. It is likewise important to recognize that even if a terrorist is killed or arrested, other groups and individuals share terrorist tactics. Sometimes this comes from direct interaction. For example, many of the Marxist terrorist groups that trained together in South Yemen, Lebanon and Libya in the 1980s employed similar tactics. Otherwise, a tactic's popularity is derived from its effectiveness. Indeed, several terrorist groups adopted airline hijacking in the 1960s and 1970s.

The mechanics of terrorism go far beyond target selection and the method of attack. This is especially true of aspiring transnational terrorists. Basic military skills may be helpful in waging terrorist attacks in areas where a militant group has access to men, weapons and targets -- such was the case with Ansar al-Sharia in Benghazi, Libya -- but an entirely different set of skills is required to operate in a hostile environment or at a distance. This set of skills is known as terrorist tradecraft.

Before an attack can be planned, an aspiring terrorist group must be organized, funded and trained. Would-be terrorists in Libya, Yemen or Pakistan's North Waziristan agency can achieve these things relatively easily. However, aspiring terrorists in New York, London and Paris encounter more difficulty. The recent arrests of such terrorists in the West, most recently the Sept. 15 arrest of a would-be jihadist in Chicago, show just how difficult it can be to find like-minded individuals to organize a terrorist cell.

A key sub-skill to operational security is the ability to procure false identification documents. False identification is required for more than just international travel; these documents are required for domestic travel as well as for commercial transactions, such as buying or renting vehicles, procuring safe-houses and purchasing firearms, explosives and other components of manufactured explosives and improvised explosive devices. False documents are more important for operatives or organizations that want to attack continually than they are for suicide bombers, provided the authorities do not know the identity of the bomber and provided the bomber can travel to the operational destination.

Establishing a secure form of communication is also a priority. As a terrorist group grows, communication tradecraft must evolve beyond the verbal communication. Naturally, the more members a group has, and the farther away they are from one another, the more challenging secure communication becomes.

Once a group is securely organized, the members must fund their operations. Indeed, the ability to transfer funds clandestinely is a skill closely related to communication. Funding varies greatly from organization and location. Some terrorist groups obtain funding from the surrounding population. In places where the group is seen as fighting a colonial power or a dictator, financial support may be willingly given. In other circumstances, the population may give support grudgingly through extortion or informal taxes levied by the terrorist group.

State sponsors are another source of funding, as are wealthy individuals sympathetic to the terrorists' causes. Terrorists also are funded through illegal activity, including large-scale narcotics sales, which are frequently used by the Revolutionary Armed Forces of Colombia and the Taliban. Hezbollah generates revenue through cigarette tax fraud and through selling counterfeit goods and fake prescription drugs. Kidnapping is also an age-old method of funding terrorism.

With organizational structure and funding in place, the terrorist organization can then turn to acquiring the skills necessary to conduct an attack. But to understand the tradecraft skills required to conduct an attack, one must first recognize that attacks do not happen randomly. They are the result of planning that follows a discernable attack cycle.

The specific skills required to conduct an attack can range from constructing an improvised explosive device to marksmanship, to driving a truck or even piloting a jumbo jet. Sometimes these skills can be acquired legally by joining a gun club or attending driver or pilot training. In other instances, skills like bombmaking must be learned illicitly, either by trial and error or by attending a terrorist training camp.

Perhaps the most important tradecraft skill in the attack planning cycle is surveillance tradecraft, or the ability to observe a potential target without alerting anyone that the target is being watched. The vulnerabilities noted during surveillance are frequently used in selecting the target. Further surveillance is often used to plan the attack, and then another round of surveillance may be conducted as part of the attack to track the target's progress to the attack site.

Planning the attack is another tradecraft skill, which requires the ability to observe a target, identify a security weakness and then contrive a means to exploit the vulnerability. The best planners devise novel approaches, such as using jumbo jets as human-guided cruise missiles, or invent ways to disguise more traditional devices, like improvised explosive devices, in such items as dolls, radios, shoes, underwear, bottles of contact lens solution, brassieres and pregnancy prosthetics

An attack tradecraft component that has often proved vulnerable during the attack planning cycle is weapons acquisition. In fact, many attacks were disrupted when the plotters attempted to procure firearms or explosives. Operational security continues to be important during the attack planning phase. Operatives must be able to create believable cover stories to explain their presence and actions in certain locations. This cover ranges from clothing -- wearing a telephone company uniform while conducting a kidnapping or dressing as a road repair crewmember to plant an improvised explosive device, for example -- to renting a farm in order to purchase large quantities of ammonium nitrate fertilizer, a common ingredient in improvised explosive mixtures.

Generally, these tradecraft skills are not concentrated in one member of a terrorist organization. Some people will be proficient at surveillance while some have a knack for making money or procuring weapons. Others may be good at manufacturing improvised explosive mixtures or assembling improvised explosive devices. However, this is true only of groups operating in their native areas.

The problem comes when a group wants to project power and conduct transnational attacks outside its core territory. In such a case, the group must identify a person proficient in a number of these tradecraft skills who can conduct an operation alone or with the assistance of a small group. This person must also be able to travel to the targeted country -- a requirement that has caused groups like al Qaeda in the Arabian Peninsula to attempt transnational strikes from afar. The fact that the al Qaeda franchise's attempts to go long have all failed -- the underwear bomber and the printer bomb plots, for example -- demonstrates how difficult such plots are.

Many groups simply cannot plan and execute complex transnational attacks like the 9/11 plot and the Mumbai attacks. However, this does not mean they are not threats. Operating in their home territory, they are very capable of causing carnage. This holds true not only for jihadist groups like the Islamic State of Iraq or the Haqqani network in Pakistan, but also for groups like al Qaeda in the Islamic Maghreb, Somalia's al Shabaab and Nigeria's Boko Haram -- all of which have a demonstrated ability to conduct devastating attacks against targets located in their home territories. In fact, the impact of Ansar al-Sharia's Benghazi attack may be regarded as a pattern, which shows how an attack that required very little transnational terrorist tradecraft nonetheless had a large international impact.

Terrorism Tradecraft is republished with permission of Stratfor.

Posted by ambisinistral at 8:57 PM

Come and see how THOUSAND of individuals like YOU are making a LIVING from home and are living their dreams right NOW.
CLICK HERE TO DISCOVER