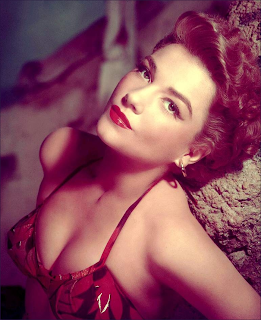 In this Stratfor article Kamran Bokhari discusses the differences between the two main Islamic factions operating in the Middle East today: the Moslem Brotherhood and the Saudi-based Salafists.

The Slafists placed second in the Egyptian elections, and it was they who staged the protests at the american Embassy in Cairo, in part to challenge Marsi's Moselme Brotherhood domination. such confrontations are likely to continue, which make the already messy Islamic problem in the region even messier.

As for the article's Hot Stratfor Babe, since both Saudi Arabia and Egypt have deserts I turned to desert movies for inspiration. In the end I selected Five Graves to Cairo and so its female lead, Anne Baxter, gets the nod.

Five Graves to Cairo is an entertaining 1943 Billy Wilder movie. A British corporal gets lost in the desert and ends up in a remote hotel. Field Marshal Rommel shows up to use it as his head quarters for an attack on Egypt and mistakes the corporal for a German spy. Much skullduggery ensues, with Anne Baxter playing the part of a French woman bitter over the British abandoning the French at Dunkirk.

As for Ms Baxter, she's the grand daughter of Frank Lloyd Wright and entered acting at a young age. She started out on Broadway, where she continued to perform regularily, but also branched of into film and eventually television. She had a very long and successful career.

The outbreak of the Arab Spring in 2011 brought significant attention to groups -- known as Islamists -- seeking to establish Islamic states in countries once ruled by secular autocrats. The bulk of this attention went to already established political groups such as the Egyptian Muslim Brotherhood, which caused consternation in the West when its Freedom and Justice Party won control of both Egypt's parliament and its presidency.

Much less attention was paid to the Brotherhood's principal Islamist competitors, members of the ultraconservative Salafist movement, despite their second-place finish in Egypt's parliamentary elections. This changed in late September when certain Salafists played a key role in the unrest in reaction to an anti-Islamic video posted on the Internet.

Since then, Salafism has become the subject of much public discourse -- though as is often the case with unfamiliar subjects, questions are vastly more numerous than answers. This is compounded by the rapidity of its rise from a relatively minor, apolitical movement to an influential Islamist phenomenon.

Origins and Goals of Salafism

Modern Salafism is based on an austere reinterpretation of Islam, calling for Muslims to return to the original teachings outlined in the Koran and the practices of the Prophet Mohammed as understood by the earliest generation, i.e., the Companions of the Prophet. From the Salafist perspective, non-Islamic thought has contaminated the message of "true" Islam for centuries, and this excess must be jettisoned from the Islamic way of life.

Salafists are a minority among the global Muslim population and even among Islamists. Unlike members of the Muslim Brotherhood, Salafists do not belong to a singular organization. Instead, the movement comprises a diffuse agglomeration of neighborhood preachers, societal groups and -- only very recently -- political parties, none of which are necessarily united in ideology.

In many ways, Salafism can be seen as a rejection of the political ideology of the Muslim Brotherhood. For most of the movement's existence, it shunned politics -- and thus Islamism -- in favor of a focus on personal morality and individual piety, arguing that an Islamic state could not exist without Muslims first returning to the tenets of "true" Islam. This means Salafism also was at odds with the concept of jihadism -- itself a violent offshoot of Salafism -- as practiced by groups such as al Qaeda that sought to use force to manifest their Islamist ideology.

The Salafist movement could also afford to stay away from political activism in large part because it had a political backer in the government of Saudi Arabia. While many Salafists didn't agree with some of Riyadh's policies, its historical role as the birthplace of Salafism and role as the patron underwriting the global spread of Salafist thought kept the movement within the Saudi orbit.

This remained the case until the 1991 Gulf War, in which Saudi Arabia was forced to allow some 500,000 U.S. troops into the kingdom to protect itself from Baathist Iraq, after the latter's brief occupation of Kuwait. The move caused an uproar over the religious legitimacy of allowing non-Muslim soldiers on what many consider to be holy grounds, and it also gave way to a wider debate about the political state of affairs of the Saudi kingdom. Prominent scholars began publicly calling for reform, which led to Salafists in general engaging in political discourse and, eventually, to the concept of Salafism as an Islamist philosophy.

Nevertheless, Salafists would not become a political force for another two decades, simply because it takes time for an apolitical religious movement to develop a political philosophy. At the same time, the Saudi leadership was rallying the country's religious establishment to contain these newly politicized Salafists. The 9/11 attacks and subsequent U.S. actions against jihadism further advanced Salafist thought as the sect tried to hold on to its core values amid U.S.-led international pressure for reform, distinguish itself from jihadists and come up with a viable political alternative to the Muslim Brotherhood.

By the end of the 2000s, Salafism had spread across the Arab world, most notably to Egypt and Tunisia, expanding both the number of its adherents and its institutional scope, which now included social organizations engaged in charity, relief and community work. They stopped short of formal political groups, largely because of the autocratic regimes under which they lived, but they quietly developed the infrastructure for such groups. It was under these circumstances that the Salafists found themselves at the beginning of the Arab Spring.

The case of Egypt's Salafists is the most telling. Like the Muslim Brotherhood, they were caught unprepared when the popular agitation largely led by liberal youth groups broke out and began to consume decades-old secular autocratic regimes. While they eventually were able to overshadow the largely non-Islamist forces that played a key role in forcing the ouster of then-President Hosni Mubarak, they lacked the political machine that the Brotherhood had developed over the course of some 80 years. The result was the rise of various Salafist forces haphazardly trying to assert themselves in a post-authoritarian Egypt.

Several Egyptian Salafist groups applied for licenses to form political parties. Two prominent parties -- al-Nour and al-Asala -- emerged along with a host of individuals, such as Hazem Salah Abu Ismail, who ran as an independent candidate for president. The two Salafist parties banded together with the newly formed political wing of the former jihadist group Gamaa al-Islamiya -- the Building and Development Party -- to form the Islamist Bloc. The alliance was able to garner more than a quarter of ballots cast in the parliamentary polls late last year, coming in second place behind the Brotherhood.

What was most important about these Salafists participating in mainstream politics is that they embraced the electoral process after decades of having denounced democracy as un-Islamic. In other words, they ultimately adopted the approach of the Muslim Brotherhood, which they had hitherto vehemently rejected. This transformation has been more a rushed affair stemming from expediency rather than a natural ideological evolution.

There is an expectation that radical forces joining the political mainstream could, over time, lead to their de-radicalization. That may be true in the case of states with strong democratic systems, but in most Arab countries -- which are just now beginning their journey away from authoritarianism -- the Salafist embrace of electoral politics is likely to delay and perhaps even disrupt the democratization process and destabilize Egypt and by extension the region.

Much of this chaos will stem from the fact that the move to accept democratic politics has led to further fragmentation of the Salafist landscape. Many Salafists still are not comfortable with democracy, and those who have cautiously adopted it are divided into many factions. The result is that no one Salafist entity can speak for the bulk of the sect.

Clearly, the Salafists are bereft of any tradition of civil dissent. That said, they have exhibited a strong sense of urgency to exercise their nascent freedom and engage in political activism. The outcome of this was the rioting that took place in reaction to the anti-Islamic film.

The Salafists are not just suffering from arrested political development; they face an intellectual discrepancy. On one hand, they wish to be part of the new democratic order and a mainstream player. On the other, they subscribe to a radical agenda that dictates the imposition of their stern interpretation of Islamic law across the Arab and Muslim world.

Their envisioned order is not just a problem for secularists, Christians, Jews and other minorities but also for more moderate Islamists such as the Muslim Brotherhood. The Brotherhood lost its monopoly on Islamism close to four decades ago but back then it didn't matter because the Brotherhood was an opposition movement. Now that the group has won political power in Egypt, the Salafists represent a threat to its political interests.

Some of the more politically savvy Salafists, especially the political parties, are willing to work with the Muslim Brotherhood toward the common goals of furthering the democratic transition and containing radical and militant tendencies. Ultimately, however, they seek to exploit the Brotherhood's pragmatism in order to undermine the mainstream Islamist movement's support among religious voters. Additionally, the Salafists are also trying to make use of their role as mediators between the Brotherhood-led government and the jihadists active in the Sinai region to enhance their bargaining power and lessen the Brotherhood's.

Salafists -- whether they operate through legal means or through raw street power -- can be expected to create problems for Egypt's new government led by President Mohammed Morsi, especially when it comes to foreign policy matters. A prime example is the recent case of the film-related violence, during which Morsi had a difficult time balancing the need to placate the masses at home and maintain a working relationship with the United States, upon which Egypt relies for its economic well-being. While the anger over the film is a passing phenomenon, the underlying dynamic persists.

There is also no shortage of issues for right-wing Islamists to exploit. U.S. imperatives in the region will continue to place the Morsi government in a tight spot and provide reasons for the Salafists to oppose Cairo's policies. Even more volatile than the dealings between the Morsi administration and Washington will be Israeli-Egyptian relations.

So far, Morsi has managed to avoid dealing too directly with Israel. But the Egyptian president and the Brotherhood cannot avoid this for too long. They know that they will face situations where they could be caught between the need to maintain peaceful relations with Israel and deal with Salafists taking advantage of the widespread anti-Israeli sentiment among Egyptians. This is one of the reasons Morsi and his associates have been speaking of revising the peace treaty with Israel, which is an attempt to manage the inevitable backlash on the home front.

Egypt's difficulties are particularly pronounced given the country's status as the leader of the Arab world, but Salafists of various stripes are slowly emerging as political stakeholders across the region, especially in Libya, Tunisia, Yemen, Gaza, Lebanon, Jordan and Syria. Democratization by its very nature is a messy affair in any context, but in the case of the Arab spring, Salafist entities can be expected to complicate political transitions and undermine stability and security in the Middle East.

The major challenge to stability in the Arab world thus lies only partially in the transition to democracy from autocracy. Greater than that is the challenge mainstream Islamists face from a complex and divided Salafist movement.

Salafism and Arab Democratization is republished with permission of Stratfor.
Posted by ambisinistral at 4:30 PM