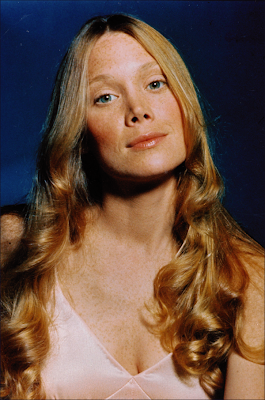 As for the article's Hot Stratfor Babe, I merged the article's theme of elections with the fact that Halloween is upon us and selected Sissy Spacek for her role in Carrie to receive the honor.

The Carrie of the movie is a socially inept young girl who's been raised by -- what else? -- a religious nut. Through a rather preposterous series of events some mean girls at her high school conspire to get her fraudulently elected prom queen where they then dump pig blood on her. I might ask, where were the adults when all this nonsense was  plotted?

Anyway, big mistake. Unknown to them Carrie has telekinetic power which she then uses to slaughter the lot of them. The end.

Considering the presidential election portion of this post, and in light of the stink eye Obama gives people who piss him off, if he loses the election it's a good thing he doesn't have telekinetic powers. Then again, as a lame duck he would still have a lot of room to do damage.

The U.S. presidential election will be held a week from today, and if the polls are correct, the outcome will be extraordinarily close. Many say that the country has never been as deeply divided. In discussing the debates last week, I noted how this year's campaign is far from the most bitter and vitriolic. It might therefore be useful also to consider that while the electorate at the moment appears evenly and deeply divided, unlike what many say, that does not reveal deep divisions in our society -- unless our society has always been deeply divided.

Since 1820, the last year an uncontested election was held, most presidential elections have been extremely close. Lyndon B. Johnson received the largest percentage of votes any president has ever had in 1964, taking 61.5 percent of the vote. Three other presidents broke the 60 percent mark: Warren G. Harding in 1920, Franklin D. Roosevelt in 1936 and Richard Nixon in 1972.

Three observations follow. First, for almost 200 years the electoral process has consistently produced a division in the country never greater than 60-40 and heavily tending toward a much narrower margin. Second, when third parties had a significant impact on the election, winners won five times with 45 percent of the vote or less. Third, in 26 of the U.S. presidential elections, the winner received less than 52 percent of the vote.

Even in the most one-sided elections, nearly 40 percent of voters voted against the winner. The most popular presidents still had 40 percent of votes cast against them. All other elections took place with more than 40 percent opposition. The consistency here is striking. Even in the most extreme cases of national crisis and a weak opponent, it was impossible to rise above just over 60 percent. The built-in opposition of 40 percent, regardless of circumstances or party, has therefore persisted for almost two centuries. But except in the case of the 1860 election, the deep division did not lead to a threat to the regime. On the contrary, the regime has flourished -- again, 1860 excepted -- in spite of these persistent divisions.

Why then is the United States so deeply and persistently divided and why does this division rarely lead to unrest, let alone regime change? Let us consider this seeming paradox in light of another fact, namely, that a substantial portion of the electorate doesn't vote at all. This fact frequently is noted, usually as a sign of a decline in civic virtue. But let's consider it another way.

First, let's think of it mechanically. The United States is one of the few countries that has not made Election Day a national holiday or held its presidential elections on a weekend. That means that there is work and school on Election Day in the United States. In the face of the tasks of getting the kids off to school, getting to work, picking up the kids on the way home -- all while fighting traffic -- and then getting dinner on the table, the urgency of exercising the franchise pales. It should therefore be no surprise that older people are more likely to vote.

Low voter turnout could also indicate alienation from the system. But alienation sufficient to explain low voter turnout should have generated more unrest over two centuries. When genuine alienation was present, as in 1860, voter turnout rose and violence followed. Other than that, unrest hasn't followed presidential elections. To me, that so many people don't vote does not indicate widespread alienation as much as indifference: The outcome of the election is simply less important to many than picking up the kids from piano lessons.

It is equally plausible that low voter turnout indicates voter satisfaction with both candidates. Some have noted that Barack Obama and Mitt Romney sound less different than they portray themselves as being. Some voters might figure there is not much difference between the two and that they can therefore live with either in office.

Another explanation is that some voters feel indifferent to the president and politics in general. They don't abstain because they are alienated from the system but because they understand the system as being designed such that outcomes don't matter. The Founding Fathers' constitutional system leaves the president remarkably weak. In light of this, while politically attentive people might care who is elected, the politically indifferent might have a much shrewder evaluation of the nature of the presidency.

The Role of Ideologues

The United States always has had ideologues who have viewed political parties as vehicles for expressing ideologies and reshaping the country. While the ideologies have changed since Federalists faced off against Democratic-Republicans, an ideological divide always has separated the two main parties. At the same time, the ranks of the true ideologues -- those who would prefer to lose elections to winning with a platform that ran counter to their principles -- were relatively sparse. The majority of any party was never as ideologically committed as the ideologues. A Whig might have thought of himself as a member of the Whig Party when he thought of himself in political terms at all, but most of the time he did not think of himself as political. Politics were marginal to his identity, and while he might tend to vote Whig, as one moved to less committed elements of the party, Whigs could easily switch sides.

The four elections in which presidents received 60 percent or more were all ideological and occurred at times of crisis: Johnson in 1964 defeated Barry Goldwater, a highly ideological candidate, in the aftermath of the Kennedy assassination; Roosevelt defeated Alf Landon, an anti-Roosevelt ideologue, during the depths of the Depression; Nixon defeated George McGovern, an anti-war ideologue, during the era of the Vietnam War and the anti-war challenge; and Warren G. Harding won in the wake of World War I and the latter debacles of the Wilson administration and its ideology.

Crisis tends to create the most extreme expressions of hostility to a challenging ideology and creates the broadest coalition possible, 60 percent. Meanwhile, 40 percent remain in opposition to the majority under any circumstances. To put it somewhat differently -- and now we get to the most significant point -- about 40 percent of the voting public cannot be persuaded to shift from their party under any circumstances, while about 20 percent are either persuadable or represent an unrooted voter who shifts from election to election.

The 60-40 break occurs rarely, when the ideological bent rallies the core and the national crisis allows one party to attract a larger block than normal to halt the less popular ideology. But this is the extreme of American politics; the normal election is much narrower.

This is because the ideologues in the parties fail to draw in the center. The weaker party members remain in their party's orbit and the 20 percent undecided distribute themselves fairly randomly, depending on their degree of indifference, so that the final vote depends on no more than a few percentage points shifting one way or another.

This is not a sign of massive divisions. Whereas the 60-40 elections are the moments of deepest political tension in which one side draws the center to it almost unanimously, in other elections -- particularly the large number in which the winner receives less that 55 percent of the vote (meaning that a 5 percent shift would change the outcome) -- the election is an election of relative indifference.

This is certainly not how ideologues view the election. For them, it is a struggle between light and darkness. Nor is it how the media and commentators view it. For them, it is always an election full of meaning. In reality, most elections are little remembered and decide little. Seemingly apocalyptic struggles that produce narrow margins do not represent a deeply divided country. The electoral division doesn't translate into passion for most of the voters, but into relative indifference with the recognition that here is another election "full of sound and fury, signifying nothing."

The fact that nearly 50 percent of the public chooses not to vote is our tipoff about the public's view of elections. That segment of the public simply doesn't care much about the outcome. The politically committed regard these people as unenlightened fools. In reality, perhaps these people know that the election really isn't nearly as important as the ideologues, media and professional politicians think it is, so they stay home.

Others vote, of course, but hardly with the intensity of the ideologues. Things the ideologues find outrageously trivial can sway the less committed. Such voters think of politics in a very different way than the ideologues do. They think of it as something that doesn't define their lives or the republic. They think of politicians as fairly indistinguishable, and they are aware that the ideological passions will melt in the face of presidential responsibility. And while they care a bit more than those who stay home, they usually do not care all that much more.

The United States has elected presidents with the narrowest of margins and presidents who had far less than a majority. In many countries, this might reveal deep divisions leading to social unrest. It doesn't mean this in the United States because while the division can be measured, it isn't very deep and by most, it will hardly be remembered.

The polls say the election will be very close. If that is true, someone will be selected late at night after Ohio makes up its mind. The passionate on the losing side will charge fraud and election stealing. The rest of the country will get up the next day and go back to work just as they did four years ago, and the republic will go on.

U.S. Presidential Elections in Perspective is republished with permission of Stratfor.
Posted by ambisinistral at 6:59 PM