Yoani Sánchez has been arrested in Cuba 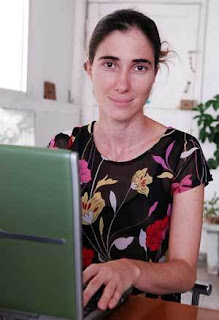 Yoani Sánchez is the Cuban dissident blogger who runs Generation Y, a site that's been on Flare's blog roll for some time. The BBC is reporting that she and her husband were arrested last week as they attempted to attend the trial of Angel Carromero.

The Cuban government is accusing Carromero of manslaughter in the death of a passenger in a car crash. Dissidents say Carromero was forced off the road and the charges are just an excuse to jail Carromero.

If you run a blog please mention her arrest. The Cuban government must not be allowed to operate in darkness. If enough of us protest perhaps the pressure will do Yoani and the other dissidents some good.

If you're not familiar with her blog, her posts were always fascinating, with a sadness and grace about them that is hard to describe. The following is from the last post, They Won't Be Back Again, that appears on her blog


Festivals of Varadero, Girasoles Opina, Bossa Nova  in Havana… a parade of progressive and talented artists toured the country in the sixties, seventies and eighties. I followed their catchiest tunes and imitated their hairstyles and clothes. Humming “Who told you I was always laughing, never crying…” “What is it, what is it, that goes sighing through the bedrooms,” “Pedro Navaja, his hands always inside his coat.” I remember my sister laughing at me and saying that I had “Brazilian hair” because my profile reminded her of a table lamp, like the profile of María Betania and many other divas of that time. I adored that comparison! It was also a time when we frequently saw Ana Belén and Víctor Manuel on the national scene. Even “La Negra,” Mercedes Sosa, sang “Thanks to life,” in front of the national microphones.

However, these usual artists also stopped visiting us. Some died, others were disillusioned by the abuses and excesses of the Revolution and, most of them, simply stopped considering Cuba among the essential places in their itineraries. From the promotional posters that used to read, “Paris, Berlin, New York, Buenos Aires… Havana,” the largest of the Antilles disappeared. We went from being an obligatory stop to becoming a place where only the ideologically convinced appeared. Politics colored everything, determined arpeggios, tunes, choruses. The music was divided between artists committed to “the cause” and “traitors” who didn’t deserve to appear before a Cuban audience. The last time I heard Joaquin Sabina in a Havana theater, a girlfriend climbed up on the stage and planted a kiss on his cheek. “The caress of farewell” we later called that gesture, because after that we never saw hide nor hair of the Andalusian again. The character (or alter ego) of one of his sung stories said, about his visit to Cuba, “I’ll never return, I don’t enjoy it.”

For an earlier post about her see Social justice delivered via a fist.

UPDATE: I should have looked around a bit more. Babalu reports that she has been released. Well, even after the fact her arrest should be protested far and wide.

Hellooooooo visitors from Instapundit.Thanks for dropping by and please mention Yoani Sánchez and Angel Carromero problems if you run a blog.
Posted by ambisinistral at 12:33 AM

Surely, the laws in Cuba are harsh and intended to silence the proponents of the regime.