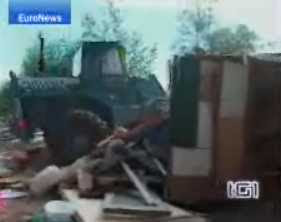 The EU Referendum blog has been covering an interesting story out of Italy. Apparently surrounding Rome are some pretty bad squatter type of slums. These settlements are grim and consist of trailers and some cardboard/plywood makeshift hovels. There are a lot of Romanian immigrants, legal since Romania is part of the EU as is Italy, living in these slums. Crime is a problem. Quoting the EU Referendum, "The mayor of Rome, Walter Veltroni, says that 75 percent of arrests for murder, rape and robbery in his city this year can be attributed to Romanians."

Emotions finally boiled over after the killing of an Italian woman, who was raped, beaten to death and tossed into a ditch. Under public pressure the Italian Prime Minister Romano Prodi, ironically a former EU president, has passed a decree allowing the deportation of any immigrant who poses a threat. This apparently runs afoul of EU Mandates, which forbid such expulsions for anything other than extraordinary cases.

The Italian government, as EU countries seem to do when the urge strikes them, are ignoring the EU's laws and have began to bulldoze the settlements. Many of the Romanian immigrants are reported to be packing up and leaving prior to the crackdown.

As I mentioned in the Gates of Vienna post comments, I think a dynamic that will come into play is that, when one EU country cracks down on immigrants, the immigrants -- due to the open borders within the EU -- will cross the borders into neighboring countries looking for greener pastures. Those countries will then be faced with either absorbing what might undesirable newcomers, or cracking down themselves. This could lead to an escalating situation that resulted in an essentially 'stateless' immigrant population sloshing around Europe.

It will be an interesting story to watch unfold. Will the EU turn a blind-eye or try to enforce their directives? Will Italy continue to ignore the EU laws? What will other countries in the EU do if they get an up-tick in Romanians immigrating from Italy? Finally, if Italy gets away with its actions, will EU countries turn their eyes towards their troublesome Moslem neighborhoods and apply the same remedy?
Posted by ambisinistral at 10:07 PM

If they had Romainian border agents, they could put them in prison for
"Wantin to Kill some Romainians"